The EBG combat engineering vehicle, based on the AMX 30 tank, is used by the engineers of the French Army for a variety of missions. 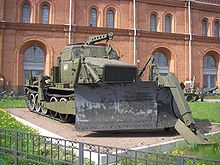 BAT-M engineering vehicle of Russia and the former Soviet Union

Military engineering vehicles are vehicles built for the construction work or for the transportation of combat engineers on the battlefield. These vehicles can range from civilian equipment to purpose built military vehicles. 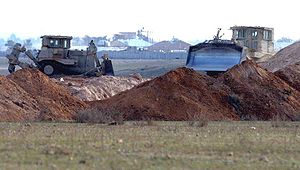 Military engineering can employ a wide variety of heavy equipment in the same or similar ways to how this equipment is used outside the military. Bulldozers, cranes, graders, excavators, dump trucks, loaders, and backhoes all see extensive use by military engineers.

Militarized heavy equipment may also take on the form of traditional civilian equipment designed and built to unique military specifications. These vehicles typically sacrifice some depth of capability from civilian models in order to gain greater speed and independence from prime movers. Examples of this type of vehicle include high speed backhoes such as the Australian Army's High Mobility Engineering Vehicle (HMEV) from Thales or the Canadian Army's Multi-Purpose Engineer Vehicle (MPEV) from Arva. 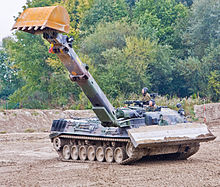 Typically based on the platform of a main battle tank, these vehicles go by different names depending upon the country of use or manufacture. In the US the term "combat engineer vehicle (CEV)" is used, in the UK the term "Armoured Vehicle Royal Engineers (AVRE)" is used, while in Canada and other commonwealth nations the term "armoured engineer vehicle (AEV)" is used. There is no set template for what such a vehicle will look like, yet likely features include a large dozer blade or mine ploughs, a large calibre demolition cannon, augers, winches, excavator arms and cranes or lifting booms.

These vehicles are designed to directly conduct obstacle breaching operations and to conduct other earth-moving and engineering work on the battlefield.

Good examples of this type of vehicle include the UK Trojan AVRE, the Russian IMR, and the US M728 Combat Engineer Vehicle.

It should be noted that while the term "armoured engineer vehicle" is used specifically to describe these multi-purpose tank based engineering vehicles, that term is also used more generically in British and Commonwealth militaries to describe all heavy tank based engineering vehicles used in the support of mechanized forces. Thus, "armoured engineer vehicle" used generically would refer to AEV, AVLB, Assault Breachers, and so on.

Lighter and less multi-functional than the AEVs described above, these vehicles are designed to conduct earth-moving work on the battlefield. These vehicles have greater high speed mobility than traditional heavy equipment and are protected against the effects of blast and fragmentation. Good examples are the American M9 ACE and the UK FV180 Combat Engineer Tractor.

Good examples of breaching vehicles include the USMC M1 Assault Breacher Vehicle, the UK Aardvark JSFU, and the Singaporean Trailblazer 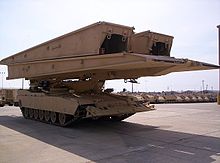 Several types of military bridging vehicles have existed through the years. The most notable are the various armoured vehicle-launched bridge (AVLB). An AVLB is typically a modified tank hull converted to carry a bridge into battle in order to support crossing ditches, small waterways, or other gap obstacles.

Another type of bridging vehicle is the truck launched bridge. Possibly the most notorious such vehicle was the former Soviet TMM bridging truck that could carry and launch a 10 meter bridge that could be daisy-chained with other TMM bridges to cross larger obstacles. More recent developments have seen the conversion of AVLB and truck launched bridge with launching systems that can be mounted on either tank or truck for bridges that are capable of supporting heavy main battle tanks.[1]

Earlier examples of bridging vehicles include a type in which a converted tank hull is the bridge. On these vehicles, the hull deck comprises the main portion of the tread way while ramps extend from the front and rear of the vehicle to allow other climb over the vehicle and cross obstacles. A notable example of this type of armoured bridging vehicle was the Churchill Ark used by the Allies in the Second World War.

Another type of CEVs are armoured fighting vehicles which are used to transport sappers (combat engineers) and can be fitted with a bulldozer's blade and other mine-breaching devices. They are often used as APCs because of their carrying ability and heavy protection. They are usually armed with machine guns and grenade launchers and usually tracked to provide enough tractive force to push blades and rakes. Some examples are the U.S. M113 APC, IDF Puma, Nagmachon, Husky, and U.S. M1132 ESV (a Stryker variant).

This field-deployable apparatus, known as EFA, used by the engineers of the French Army, may either be used as a bridge (deployed in a series), or as a ferry

One of the major tasks of military engineering is crossing major rivers. Several military engineering vehicles have been developed in various nations to achieve this task. One of the more common types is the amphibious ferry such as the M3 Amphibious Rig. These vehicles are self-propelled on land, they can transform into raft type ferries when in the water, and often multiple vehicles can connect to form larger rafts or floating bridges. Other types of military ferries, such as the Soviet Plavayushij Transportyor - Srednyj, are able to load while still on land and transport other vehicles cross country and over water.

In addition to amphibious crossing vehicles, military engineers may also employ several types of boats. Military assault boats are small boats propelled by oars or an outboard motor and used to ferry dismounted infantry across water. 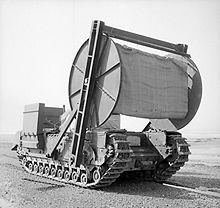 Churchill "Bobbin", a rolled roadsurface that could be laid for following vehicles to cross loose sand

Most CEVs are armoured fighting vehicles that may be based on a tank chassis and have special attachments in order to breach obstacles. Such attachments may include dozer blades, mine rollers, cranes etc. An example of an engineering vehicle of this kind is a bridgelaying tank, which replaces the turret with a segmented hydraulic bridge.

The Hobart's Funnies of the Second World War were a wide variety of armoured vehicles for combat engineering tasks. They were allocated to the initial beachhead assaults by the British and Commonwealth forces in the D-Day landings

The British Churchill tank because of its good cross-country performance and capacious interior with side hatches became the most adapted with modifications, the base unit being the AVRE carrying a large demolition gun. 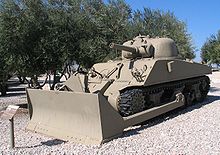 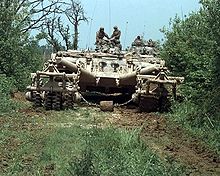 A remotely controlled Panther armored mine clearing vehicle leads a column down a road in Bosnia and Herzegovina, May 16, 1996. 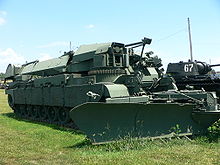 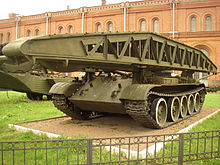 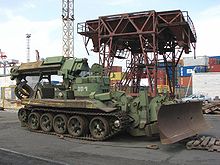