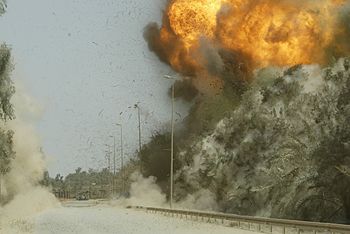 Detonation of a MICLIC to destroy a 1km in depth blast resistant minefield in Iraq.

A mine-clearing line charge (abbreviated MCLC and pronounced "mick lick") is used to create a breach in minefields under combat conditions. While there are many types, the basic design is for many explosive charges connected on a line to be projected onto the minefield. The charges explode, detonating any buried mines, thus clearing a path for infantrymen to cross. The system may either be man-portable, or vehicle-mounted. The systems do not guarantee clearance of all types of mines.[1]

The British and Commonwealth developed their systems during the Second World War. The Canadians developed "Snake", an oversized application of the Bangalore Torpedo in 1941 to 1942. A more flexible development was "Conger", developed in 1944, a tube that could be fired across the minefield and then filled with explosive before detonation.[2]

Conger was a 2 inch woven pipe launched by a five-inch rocket. The tube and rocket were mounted in a Universal Carrier which had been stripped out to reduce it down to an armoured tracked trailer that could be towed by a tank, often a Churchill AVRE. The rocket was fired, trailing the hose across the area to be cleared. Compressed air was then used to pump the high explosive - just over a ton of 822C - into the hose before it was detonated. Conger was used in Normandy where there were instances of premature detonation.[3]

In the post war period the British introduced Giant Viper.

Systems in current use include the British Python, which can clear a 220m long path, and the American M58 Mine Clearing Line Charge. Both are large, heavy systems that are deployed in a vehicle–towed trailer. The US Army also uses the Antipersonnel Obstacle Breaching System, which clears a path 0.6 to 1.0 meters by 45 meters, and is light enough to be carried by two soldiers.

Some modern mines, such as the Italian SB-33 mine, have a fuze mechanism that detonates the mine if subject to gradual, steady pressure, but locks the fuze if subject to a sudden shock. This can defeat the use of mine-clearing line charges to clear such mines.