Since its creation in 1787 as Łyczakowski Cemetery, it has been the main necropolis of the city's inteligentsia, middle and upper classes. Initially the cemetery was located on several hills in the borough of Lychakiv, following the imperial Austro-Hungarian edict ordering that all cemeteries be moved outside of the city limits. The original project was prepared by Karol Bauer, the head of the Lviv University botanical garden.

In mid-1850s the cemetery was expanded significantly by Tytus Tchórzewski, who created the present network of alleys and round-abouts. It then became the main city cemetery, and soon most other cemeteries were closed. The two largest that remained were the Yanivskiy Cemetery (Polish: cmentarz Janowski), with many working class graves) and the adjacent New Jewish Cemetery. Lychakivskiy Cemetery was used by all Christian sects in the city: in addition to Roman Catholics, it also included Eastern Rite Catholics, Protestants and Orthodox.

In 1925 the ashes of one of the unknown defenders of Lviv were transferred to the Tomb of the Unknown Soldier in Warsaw. Since 1999 there is also a monument to the Sich Riflemen located just outside the Polish mausoleum – Cemetery of the Defenders of Lwów.

After World War II the city was annexed by the Soviet Union to the Ukrainian SSR and the majority of the surviving pre-war inhabitants of the city were expelled to the former German areas awarded to Poland after the Yalta Conference. This started a period of devastation of historical monuments located at the cemetery. Up to 1971 many of the sculptures were destroyed; the cemetery of Lwów Eagles was completely destroyed and turned into a truck depot. However, in 1975 the cemetery was declared a historical monument and the degradation ended. Since the late 1980s, the cemetery has seen constant rebuilding and refurbishment and continues to be one of the principal tourist attractions of Lwów. Due to the history of complex Polish-Ukrainian relations, the Polish Eagles Cemetery was neglected because the Ukrainian authorities did not want to rebuild this monument of little Polish soldiers defending the city in 1920s. Though in the late 1980s, workers of a Polish company which were working in Khmelnytskyi started to redecorate and rebuild the necropolis from its ruins (which was not always legal according to Ukrainian law). Although the Ukrainian authorities tried to stop the works several times, the Poles managed to renovate this important memorial of great Lvovians.

In late 2006 the city administration announced plans to transfer the tombs of Stepan Bandera, Yevhen Konovalets, Andriy Melnyk and other key leaders of OUN/UPA to a new area of the cemetery dedicated to the Ukrainian national liberation struggle.[1] 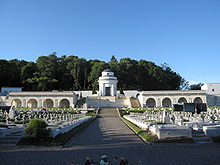 Cemetery of the Defenders of Lwów 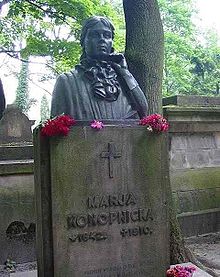 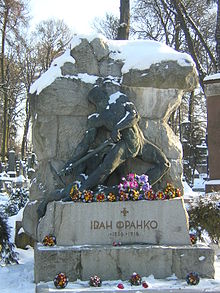 Tomb of the poet Ivan Franko.

Since the city for centuries used to be a centre of Polish culture, there are numerous famous Poles buried there. Among them are:

Among the notable Ukrainians buried there are:

There are also numerous parts of the cemetery in which veterans of most wars of 19th and 20th centuries are buried, including the quarters of veterans of: