Yin Yang Yo! is a Canadian-American animated television series created by Bob Boyle II (also the creator of Nick Jr. series Wow! Wow! Wubbzy!) and produced by Jetix Animation Concepts. It is the third Jetix-original show. It premiered on October 2, 2006 on Jetix with a sneak peek airing on August 26, 2006. It debuted on Jetix UK on February 5, 2007 after a sneak peek preview on January 27, 2007. It made its Canadian television premiere on Family Channel on March 25, 2006. It stars two rabbits named Yin and Yang, and their panda master named Master Yo. The series' second (and final) season premiered on December 31, 2007 and ended on April 18, 2009.

This show is about two anthropomorphic rabbit twins named Yin and Yang that train under Master Yo, a grumpy old panda who ends up being their father. They learn the sacred art of Woo Foo, a special type of martial arts that involves might and magic. They must work together to save the world from evil villains and forces that want to destroy, corrupt, or take it over. But through all these adventures, Yin and Yang still portray typical siblings; sometimes disagreeing with each other, but still care about each other and working together when needed.

During the first season, the primary goal was to defeat the Night Master, a powerful enemy. During the second season, there are three primary storylines. The first one sees Yin and Yang trying to prevent other villains from being crowned the new Night Master. The second is Yang's own quest to find powerful mystic artifacts by some later-revealed-to-be villains: four evil heads who he thinks are the masters of Woo Foo. The third sees Yin and Yang against the original and reborn Night Master, Eradicus – ultimately trying to build a Woo Foo army to fight against his army.

The setting is in an Asian part of Chicago. The town's buildings have an Asian style. The residents are monsters, humanoids, robots and animals with human-like qualities and behaviors. The residents keep unusual pets like puppygriffs, creatures that are half puppy and half griffin, as well as real animals like dogs, cats, opossums or armadillos. Magic and martial arts still exist since ancient times when the Night Masters were around.

Yin Yang Yo! premiered on Jetix on October 2, 2006, and the first season has been completed with 26 episodes, including the three parts to Woofoogeddon. In January 2007, Jetix ordered a second season of Yin Yang Yo! with 26 episodes planned.[1] The second season premiered on January 1, 2008 and ended on April 18, 2009, with 13 additional episodes. 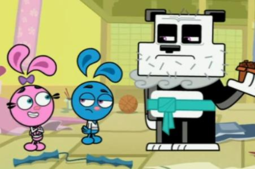 The series main characters from left to right: Yin, Yang, and Master Yo.