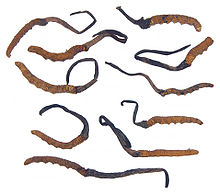 There are over 680 documented species of the sac fungus genus Ophiocordyceps, and one of the best known of these is Ophiocordyceps sinensis, colloquially known as caterpillar fungus. The fungus is known in Tibetan as yartsa gunbu or yatsa gunbu.

Caterpillar fungi are the result of a parasitic relationship between the fungus and the larva of the ghost moth genus Thitarodes, several species of which live on the Tibetan Plateau (Tibet, Qinghai, West-Sichuan, SW-Gansu & NW Yunnan, all in China, and the Himalayas India, Nepal, Bhutan). The fungus germinates in living organisms (in some cases the larvae), kills and mummifies the insect, and then the fungus grows from the body of the insect.

O. sinensis is known in the West as a medicinal mushroom and its use has a long history in Traditional Chinese medicine as well as Traditional Tibetan medicine.[2] The hand-collected fungus-caterpillar combination is valued by herbalists and as a status symbol;[3] it is used as an aphrodisiac and treatment for ailments such as fatigue and cancer, although such use is mainly based on traditional Chinese medicine, anecdote, and a limited amount of research. Clinical trials have not established its efficacy.

The species was first described scientifically by Miles Berkeley in 1843 as Sphaeria sinensis;[4] Pier Andrea Saccardo transferred the species to the genus Cordyceps in 1878.[5] The scientific name's etymology is from the Latin cord "club", ceps "head", and sinensis "from China". The fungus was known as Cordyceps sinensis until 2007, when molecular analysis was used to emend the classification of the Cordycipitaceae and the Clavicipitaceae, resulting in the naming of a new family Ophiocordycipitaceae and the transfer of several Cordyceps species to Ophiocordyceps.[6]

In Tibetan it is known as དབྱར་རྩྭ་དགུན་འབུ་ yartsa gunbu [Wylie: dbyar rtswa dgun 'bu, "summer herb winter worm"], which is the source of the Nepali यार्शागुम्बा, yarshagumba, yarchagumba or yarsagumba. The transliteration in Bhutan is Yartsa Guenboob. It is also known as keera jhar or keeda ghas in India. Its name in Chinese dong chong xia cao (冬虫夏草) means "winter worm, summer grass" (i.e., "worm in the winter, [turns to] plant in the summer"). The Chinese name is a literal translation of the original Tibetan name, which was first recorded in the 15th Century by the Tibetan doctor Zurkhar Namnyi Dorje. In colloquial Tibetan Yartsa gunbu is often shortened to simply "bu" or "yartsa".

In traditional Chinese medicine, its name is often abbreviated as chong cao, a name that also applies to other Cordyceps species, such as C. militaris. In Japanese it is known by the Japanese reading tōchūkasō.

Strangely, sometimes in Chinese English language texts Cordyceps sinensis is referred to as aweto, which is the Māori name for Cordyceps robertsii, a species from New Zealand.

The English term "vegetable caterpillar" is a misnomer, as no plant is involved. "Caterpillar fungus" is a preferable term.

The caterpillars prone to infection by the fungus live underground in alpine grass and shrublands on the Tibetan Plateau and the Himalayas at an altitude between 3,000 and 5,000 m (9,800 and 16,000 ft). Spending up to five years underground before pupating, the Thitarodes caterpillar is attacked while feeding on roots. It is not certain how the fungus infects the caterpillar; possibly by ingestion of a fungal spore or by the fungus mycelium invading the insect through one of its breathing pores. The fungus invades the body of the caterpillars, filling its entire body cavity with mycelia and eventually killing and mummifying it. The caterpillars die near the tops of their burrows. The dark brown to black fruiting body (or mushroom) emerges from the ground in spring or early summer, always growing out of the forehead of the caterpillar. The long, usually columnar fruiting body reaches 5–15 cm above the surface and releases spores.

In Nepal caterpillar fungus is found on the subalpine pastures in Dolpo in Karnali Zone and Darchula in Mahakali zone. It is also common in Bhutan and India's Himachal Pradesh and Uttarakhand Himalayas. Reports of distribution outside of "High Asia" are erroneous and relate to species of Cordyceps, e.g. Cordyceps militaris. 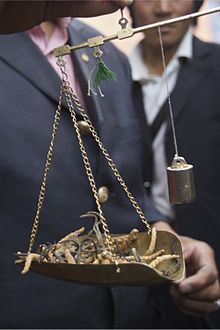 Medicinal use of the caterpillar fungus apparently originated in Tibet. So far the oldest known text documenting its use was written in the late fourteen hundreds by the Tibetan doctor Zurkhar Nyamnyi Dorje (Wylie: Zur mkhar mnyam nyid rdo rje)[1439-1475]) in his text: Man ngag bye ba ring bsrel ("Instructions on a Myriad of Medicines"). A translation is available at Winkler.[7] However some Tibetan doctors suspect that its use might date back even further, but under different names. No conclusive research is published on this hypothesis yet.

The first mention of Ophiocordyceps sinensis in traditional Chinese Medicine was in Wang Ang’s 1694 compendium of material medica, Ben Cao Bei Yao.[8] In the 18th Century it was listed in Wu Yiluo's Ben cao cong xin ("New compilation of materia medica").[9] No sources have been published to uphold widespread claims of "thousands of years of use in Chinese medicine" or use of "chong cao since the 7th Century Tang Dynasty in China". The ethno-mycological knowledge on caterpillar fungus among the Nepalese people is documented by Devkota(2006) The entire fungus-caterpillar combination is hand-collected for medicinal use.

The fungus is a medicinal mushroom which is highly prized by practitioners of Tibetan medicine, Chinese medicine and traditional Folk medicines, in which it is used as an aphrodisiac and as a treatment for a variety of ailments from fatigue to cancer. It is regarded as having an excellent balance of yin and yang as it is apparently both animal and vegetable (though it is in actuality not vegetable, but fungi). Assays have found that Ophiocordyceps species produce many pharmacologically active substances. They are now cultivated on an industrial scale for their medicinal value. However, no one succeeded so far growing the larva cum mushroom artificially. All artificial products are derived from mycellium grown on grains or in liquids.

According to Bensky et al. (2004), laboratory-grown C. sinensis mycelium has similar clinical efficacy and less associated toxicity. He notes a toxicity case of constipation, abdominal distension, and decreased peristalsis, two cases of irregular menstruation, and one case report of amenorrhea following ingestion of tablets or capsules containing C. sinensis. In Chinese medicine C. sinensis is considered sweet and warm, entering the lung and kidney channels; the typical dosage is 3–9 grams.[10]

Cordycepin, a compound isolated from the "Caterpillar fungus".

Some work has been published in which Ophiocordyceps sinensis has been used to protect the bone marrow and digestive systems of mice from whole body irradiation.[11] An experiment noted Ophiocordyceps sinensis may protect the liver from damage.[12] An experiment with mice noted the mushroom may have an anti-depressant effect.[13] Researchers have noted that the Caterpillar fungus has a hypoglycemic effect and may be beneficial for people with insulin resistance.[14][15][16][17][18]

The Western world was largely unaware of Ophiocordyceps prior to 1993. The fungus dramatically caught the world's eyes due to the performance of three female Chinese athletes, Wang Junxia, Qu Yunxia, and Zhang Linli. These athletes broke 5 world records for 1,500, 3,000 and 10,000 meters at the National Games in Beijing, China. The number of new world records being set at a single track event attracted much attention and suspicion. Following the races the women were expected by some to fail drug tests for anabolic steroids. However, the athletes' tests revealed no illegal substances, and coach Ma Junren told the reporters that the runners were taking Ophiocordyceps sinensis and turtle blood at his request. However for the Sydney Olympics, Ma Junren withdrew some of his athletes at the last minute. It was speculated that a new doping test would have revealed illegal doping, thus half a dozen Chinese field and track athletes were left at home. 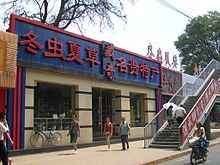 In rural Tibet, yartsa gunbu has developed to become the most important source of cash income. The fungi contributed 40% of the annual cash income to local households and 8.5% to the GDP in 2004. Prices have increased continuously, especially since the late 1990s. In 2008, one kilogram traded for US$3,000 (lowest quality) to over US$18,000 (best quality equalling the largest larvae). The annual production on the Tibetan Plateau is estimated at 100–200 tons.[8] The Himalayan Ophiocordyceps production might not exceed a few tons.

According to Daniel Winkler, the price of Ophiocordyceps sinensis has risen dramatically on the Tibetan Plateau, basically 900% between 1998 and 2008, an annual average of over 20% (after inflation). However, the value of big sized caterpillar fungus has increased more dramatically than smaller size Cordyceps, regarded as lower quality.[8]

Because of its incredible value, inter-village conflicts over access to its grassland habitats has become a headache of the local governing bodies and in several cases people were killed. On the 15th of November, A court in Nepal convicted 19 villagers over the murder of a group of farmers during a fight over the prized aphrodisiac plant. Seven farmers were killed in the remote northern district of Manang in June 2009 after going to forage for Yarchagumba. [20]

Its value gave it a role in the Nepalese Civil War, as the Nepalese Maoists and government forces fought for control of the lucrative export trade during the June–July harvest season.[21] Collecting yarchagumba in Nepal had only been legalised in 2001, and now demand is highest in countries such as China, Thailand, Vietnam, Korea and Japan. By 2002, the herb was valued at R 105,000 ($1,435) per kilogram, allowing the government to charge a royalty of R 20,000 ($280) per kilogram.

The search for Ophiocordyceps sinensis is often perceived to pose a threat for the environment of the Tibetan Plateau where it grows. While it has been collected for centuries and is still common in such collection areas, current collection rates are much higher than in historical times.

Ophiocordyceps producers like to perpetuate the story that unscrupulous harvesters insert twigs into the ascocarps of wild C. sinensis to increase the weight and therefore the price paid. A tiny twig is only used when the ascocarp is broken from the caterpillar, and has nothing to do with weight increases. Supposedly at some point in the past, someone has inserted lead wires with which to increase weight; however, each year hundreds of millions of specimens are harvested and this appears to have been a one time occurrence.[citation needed]

Cultivated C. sinensis mycelium is an alternative to wild-harvested C. sinensis, and producers claim it may offer improved consistency. Artificial culture of C. sinensis is typically by growth of the pure mycelium in liquid culture (in China) or on grains (in the West). Ascocarps are not produced through in vitro cultivation.