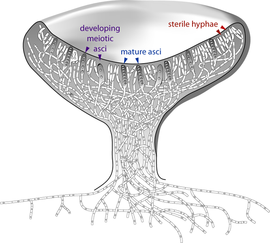 Diagram of an apothecium showing sterile tissues as well as developing and mature asci.

An ascocarp, or ascoma (plural: ascomata), is the fruiting body (sporocarp) of an ascomycete fungus. It consists of very tightly interwoven hyphae and may contain millions of asci, each of which typically contains eight ascospores. Ascocarps are most commonly bowl-shaped, but may take on a number of other forms.

The ascocarp is classified according to its placement (in ways not fundamental to the basic taxonomy). It is called epigeous if it grows above ground, as with the morels, whilst underground ascocarps, such as truffles are hypogeous.

The form of the hymenium is divided into the following types (which are important for classification). Apothecia can be relatively large and fleshy, whereas the others are microscopic — about the size of flecks of ground pepper.

Here the fertile layer is free, so that many spores can be dispersed simultaneously. The morel, Morchella, an edible ascocarp, not a mushroom, favored by gourmets, is a mass of apothecia fused together in a single large structure or cap. The genera Helvella and Gyromitra are similar. 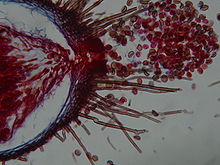 A cleistothecium is a globose, completely closed fruit body with no special opening to the outside. The fruit wall which is called peredium may simple consist of loosely interwoven hyphae or pseudoparechyma. It may be covered with hyphal outgrowth called appendages. The asci inside the ascocarps are found usually scattered i.e. as in Eurotium or arising in tufts from the basal region of ascocarps as in Erysiphe. The asci are globose, pear shaped and released by irregular disintegration of the wall of cleistothecium. Example –Gymnoascus (some authors called gymnothecium), Eurotium (imperfect state –Aspergillus).

In this case the ascocarp is round with the hymenium enclosed, so the spores do not automatically get released, and fungi with cleistothecia have had to develop new strategies to disseminate their spores. The truffles, for instance, have solved this problem by attracting animals such as wild boars, which break open the tasty ascocarps and spread the spores over a wide area. Cleistothecia are found mostly in fungi that have little room available for their ascocarps, for instance those that live under tree bark, or underground like truffles. Also, the dermatophyte Arthroderma forms cleistothecia. 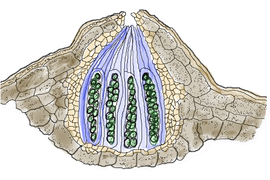 Diagram of a perithecium. The ascospores (green) are in 8 pairs in each ascus.