Un Chien Andalou (French pronunciation: [œ̃ ʃjɛ̃ ɑ̃dalu], An Andalusian Dog) is a 1929 silent surrealist short film by the Spanish director Luis Buñuel and artist Salvador Dalí.[1] It was Buñuel's first film and was initially released in 1929 to a limited showing in Paris, but became popular and ran for eight months.[2]

The film has no plot in the conventional sense of the word. The chronology of the film is disjointed, jumping from the initial "once upon a time" to "eight years later" without the events or characters changing very much. It uses dream logic in narrative flow that can be described in terms of then-popular Freudian free association, presenting a series of tenuously related scenes.

Simone Mareuil's eye being held open by Luis Buñuel in the opening scene.

The film opens with a title card reading "Once upon a time". What may be the film's conclusion unfolds; a middle-aged man (played by Buñuel) sharpens his razor at his balcony door and tests the razor on his thumb. He then opens the door, and idly fingers the razor while gazing at the moon, about to be engulfed by a thin cloud, from his balcony. There is a cut to a close-up of a young woman (Simone Mareuil) being held by the man as she calmly stares straight ahead. Another cut occurs to the moon being overcome by the cloud as the man slits the woman's eye with the razor, and the vitreous humour spills out from it.

The subsequent title card reads "eight years later". A slim young man (Pierre Batcheff) bicycles down a calm urban street wearing what appears to be a nun's habit and a locked box with a strap around his neck. A cut occurs to the young woman from the first scene, who has been reading anxiously in a sparingly furnished upstairs apartment, and she hears the young man approaching on his bicycle. She promptly throws aside the book she was reading (revealing a reproduction of Vermeer's The Lacemaker) and goes to the window. She emerges from the building and attempts to revive the young man after witnessing him collapse from the bicycle.

Later, the young woman assembles pieces of the young man's clothing on a bed in the upstairs room, and seemingly through concentrating on the clothing causes the young man to appear near the door. The young man and the young woman stare at his hand, which has a hole in the palm from which ants emerge. A slow transition occurs focusing on the armpit hair of an unknown figure and a sea urchin at a sandy location. An androgynous young woman appears in the street below the apartment, poking at a severed hand with a cane while surrounded by an angry crowd and police.

The crowd clears when the police place the hand in the box previously carried by the young man, and the androgynous young woman contemplates something happily while standing perilously in the middle of the now busy street, clutching the box. She is then run over by a car and a few bystanders gather around her. The young man and the young woman watch these events unfold from the apartment window. The young man seems to take sadistic pleasure in the androgynous young woman's danger and subsequent death, and as he gestures at the shocked young woman in the room with him, he leers at her and grasps her bosom. The young woman resists him at first, but then allows him to touch her as he imagines her nude from the front and the rear. The young woman pushes him away as he drifts off and she attempts to escape by running to the other side of the room. The young man corners her as she reaches for a racquet in self-defense, but he suddenly picks up two ropes and drags two grand pianos containing dead and rotting donkeys, stone tablets containing the Ten Commandments, and two rather bewildered priests (played by Jaime Miravitilles and Salvador Dalí) who are attached by ropes. As he is unable to move, the young woman escapes the room. She finds the young man in the next room, dressed in his nun's garb in the bed. 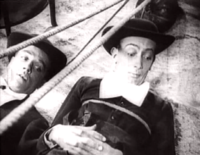 Jaime Miravitilles and Salvador Dalí as the confused priests.

The subsequent title card reads "around three in the morning". The young man is roused from his bed by the sound of a doorbell (represented visually by a martini shaker being shaken by a set of arms through two holes in a wall). The young woman goes to answer the door and does not return. Another young man dressed in lighter clothing (also played by Pierre Batcheff) angrily arrives in the apartment, possibly to punish the other young man for his lecherous actions against the young woman. The second young man forces the first one to throw away his nun's clothing and then makes him stand against a wall.

As she exits her apartment, the street is replaced by a coastal beach, where the young woman meets a third man with whom she walks arm in arm. He shows her the time on his watch and they walk near the rocks, where they find the remnants of the first young man's nun's clothing and the box. They seem to walk away clutching each other happily and make romantic gestures in a long tracking shot. However, the film abruptly cuts to the final shot with a title card reading "In Spring," showing the couple buried in sand up to their elbows, presumably dead, possibly bringing the film full-circle to a time after the unknown events of the opening scene. 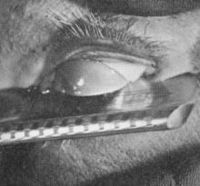 The legendary shot of the eyeball (actually that of a dead calf) being slit by Buñuel. 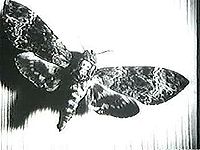 The idea for the film began when Buñuel was working as an assistant director for Jean Epstein in France. Buñuel told Dalí at a restaurant one day about a dream in which a cloud sliced the moon in half "like a razor blade slicing through an eye". Dalí responded that he'd dreamed about a hand crawling with ants. They were fascinated by what the psyche could create, and decided to write a script based on the concept of suppressed human emotions.

For many years (and still), published and unpublished reports have circulated that Buñuel had used a dead pig’s eye,[3][4] or that of a dead sheep,[5] or of a dead donkey,[6] or other animal, in the notorious eyeball-slicing scene. However, in an interview in 1975 or ’76, Buñuel claimed that he had used a dead calf’s eye.[7] Through the use of intense lighting, Buñuel attempted to make the furred face of the animal appear as human skin.

During the bicycle scene, the woman who is sitting on a chair, reading, throws the book aside when she notices the man who has fallen. The image it shows when it lays open is a reproduction of a painting by Vermeer, whom Dalí greatly admired and often referred to in his own paintings. In Buñuel's original script, the last shot was to feature the corpses "consumed by swarms of flies". However, this special effect was left out due to budget limitations.

Legend has it that, when they screened the film for the group of noted European artists calling themselves "surrealists," they carried sacks of rocks in their pockets on opening night as self-defense, expecting a negative response from the audience. They were disappointed when the audience enjoyed the film, making the evening "less exciting," according to Dalí. Thereafter, both Buñuel and Dalí were accepted figures in the surrealist movement.

The movie contains several thematic references to Federico García Lorca and other writers of that time. For example, the rotting donkeys are a reference to the popular children's novel Platero y yo by Juan Ramón Jiménez, which Buñuel and Dalí hated.

Both of the leading actors of the film eventually committed suicide: Batcheff overdosed on Veronal on April 13, 1932 in a hotel in Paris, and Mareuil committed self-immolation on October 24, 1954 by dousing herself in gasoline and burning herself to death in a public square in Périgueux, Dordogne.

Modern prints of the film feature a soundtrack consisting of excerpts from Richard Wagner's "Liebestod," the concert version of the finale to his opera "Tristan und Isolde," and a recording of a tango sometimes mistakenly referred to as "Olé guapa." This is the same soundtrack that Buñuel chose and played live on a phonograph during the original 1929 screening in Paris. They were first added to a print of the film in 1960 under Buñuel's supervision.[8]

In spite of varying interpretations made since the film originated, Buñuel made clear throughout his writings that, between Dalí and himself, the only rule for the writing of the script was that "no idea or image that might lend itself to a rational explanation of any kind would be accepted."[9] Moreover, he stated that, "Nothing, in the film, symbolizes anything. The only method of investigation of the symbols would be, perhaps, psychoanalysis."[10]