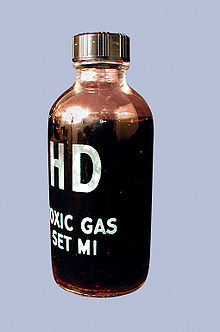 A typical glass bottle from a type of CAIS known as a "toxic gas set". This one contains sulfur mustard (HD).

Chemical Agent Identification Sets (CAIS), known by several other names, were sets of glass vials or bottles that contained small amounts of chemical agents. They were employed by all branches of the United States Armed Forces from 1928-1969 for the purpose of training in detection, handling and familiarization with chemical warfare. Most CAIS were destroyed in the 1980s but the U.S. Army Chemical Materials Agency still occasionally demilitarizes CAIS that are found buried.

CAIS were used by all branches of the United States military for training in detection, handling and familiarization with chemical warfare agents between the 1930s and 1960s.[1][2] The U.S. Army used CAIS to train its soldiers from 1928 until 1969.[2] During this time period more than 100,000 CAIS units were produced by all branches of the military.[1] CAIS were declared obsolete in 1971 and systematically recalled from military installations during two operations.[2] The first recall operation, Operation Set Consolidation I (SETCON I), was in 1978; SETCON II followed on in 1980.[2]

Chemical Agent Identification Sets were small glass vials, ampules or bottles which contained small amounts of chemical warfare agents or industrial chemicals.[1] Each set contained more than two dozen glass ampules, each ampule contained about 100 milliliters of chemical agent.[2] There were three subsets of CAIS, distributed in 18 different set configurations.[2] These subsets included bottles of sulfur mustard used to purposely contaminate equipment or terrain for decontamination training.[3] Another type of CAIS were known as "sniff sets" and were used to train soldiers to recognize the color and odor of chemical agents.[1] Used indoors, the sniff sets contained agent-impregnated charcoal and agent simulants; they contained very little actual chemical warfare agent.[1]

Each of the CAIS held between one and five different chemical agents.[2] The agents used in CAIS were phosgene, adamsite, lewisite, cyanogen chloride, chloroacetophenone, sarin, nitrogen mustard, sulfur mustard and chloropicrin.[4] In addition, triphosgene, a phosgene simulant, and ethyl malonate, a tabun simulant were also used.[4] Sarin was the only nerve agent used in CAIS.[4]

Following the recall operations of the late 1970s and early 1980s, 21,400 CAIS were sent to Rocky Mountain Arsenal where they were destroyed by incineration.[2][5] The destroyed CAIS represented the entire stockpile then in storage.[5] This initial disposal took place from May-October 1979 and again from May 1981-December 1982.[2]

Though the stockpile of CAIS were destroyed decades ago, there remained the problem of what to do with CAIS found buried underground. Most of the other 80,000 or so CAIS were used during training but some were disposed of, the primary method of disposal was burial.[1] The U.S. Army Chemical Materials Agency was assigned the task of destroying CAIS as they were found, usually through ongoing construction projects.[6] When CAIS items are found the Chemical Materials Agency's Non-Stockpile Chemical Materiel Project (NSCMP) is tasked to destroy them via one of two mobile treatment systems.[5]