Deseret Chemical Depot
Not to be confused with Deseret Test Center.

The area has been used to store chemical weapons since 1942 and weapons destruction began in August 1996 at the Depot which held, at that time, 45% of the total U.S. stockpile.[1] After initial demilitarization operations concerning the Weteye bomb concluded a total of 888 of those bombs were left in storage at Rocky Mountain Arsenal.[2][3] After rounds of protests from residents of Utah, the state's governor, and legal action the munitions were transferred to what was then known as Tooele Army Depot South Area.[3] The first transfer of Weteyes took place in August 1981 and the moves continued for three weeks. After these transfers the South Area became known as Deseret Chemical Depot.[3] 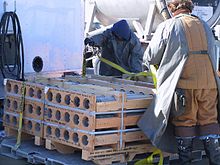 As of January 2007[update], 7,593 tons (6,888 metric tons) of chemical weapons have been destroyed using incineration. All GB (sarin) was destroyed by March 2002 and all VX by June 2005. In 2006, the facility was changed-over to handle destruction of mustard gas in ton-sized containers. By March 15, 2009, 3,216 ton containers and 54,453 projectiles of mustard gas had been destroyed (51.5% of Deseret's mustard agent stockpile).[4][5][6][7] The last explosively configured mustard gas munition was reported destroyed in May 2010.[8] All Tabun (GA) was destroyed by November 10, 2011.[9] Disposal of mustard gas containing land mines as well as a small stockpile of Lewisite has not been completed. All disposal operations are projected to be concluded by Fall 2011.[10]

At 9:24 AM UTC-07, September 5, 2002,[11] officials at the depot triggered the Terrorist Alert Warning System in response to an unidentified intruder being spotted near an old pioneer cemetery, located within the secured perimeter of the depot. The cemetery is roughly a mile north of the incinerator on a hilltop.[12] It was the first time that the alarm, which alerts employees to possible terror threats, had been sounded since new security measures were instituted after 9/11.[13] As soon as the alert was sounded, area schools were notified of a possible terror threat.[14]

Due to the proximity of the date of the intrusion to the September 11th attacks the year before, security was even higher than normal, and it was initially reported to KSL-TV in Salt Lake City, Utah that units from the 145th Field Artillery group, a part of the Utah National Guard, had the intruder surrounded. Army officials later stated the trespasser, who was dressed in dark clothing and fled when sighted by four different soldiers during two different patrols,[11] had escaped the depot.[15] Despite the immediate setting up of roadblocks and a combined search by Army units and helicopters, no trace of the intruder was found.[16] Officials emphasized that the intruder was not in the area where chemical weapons were stored, but "unsettling questions remain" about his intentions,[17] as there was no evidence of anything being stolen or that terrorism was in fact involved.[15]