Below is a list of the oldest living people from Italy. Those listed as 'verified' have been validated by the Gerontology Research Group, an international body that specifically deals in longevity research. If a lifespan were listed as 'pending' it would mean it is backed by at least one document supporting the reported age but not the three necessary for validation by GRG. Currently, no such items appear on the list below. Those listed as 'unverified' are backed by no documents reviewed by GRG to support the reported age.

Chronological list of the oldest living person in Italy since 1991 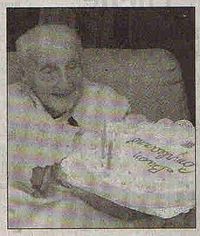 Dighero-Zolezzi on her 114th birthday

Virginia Dighero-Zolezzi (24 December 1891 – 28 December 2005)[11] was an Italian supercentenarian.[12]. On 14 September 2005, she became the longest-lived person of Italian descent ever, having surpassed Amalia Ruggieri Barone, who was an emigrant to the United States.

At the time of her death, she was the oldest ever documented person from Italy at the age of 114 years, 4 days [12] - a title she held for more than five years, until being supassed by Venere Pizzinato on 28 November 2010. She was also the 7th-oldest living person in the world, at time of death, and the oldest verified living person in Europe.[13]

Venere Pizzinato (23 November 1896 – 2 August 2011)[14] was an Italian supercentenarian[1] who was the oldest verified person from Italy,[15] living to the age of 114 years, 252 days. From May 2010 to her death, she also was the oldest recognized verified living person in Europe. She became one of the ten oldest living people in March 2010. Pizzinato was also the oldest person ever to have been born in the Austrian-Hungarian empire. At the time of her death, Pizzinato was the 3rd oldest living person in the world, one of the 10 oldest Europeans ever, and one of the 40 oldest people ever verified in world history.

She was born in Ala in the province of Trentino, then part of the Austrian-Hungarian empire, on 23 November 1896. In 1902 the family moved to Verona, where they had relatives. Soon afterwards, in 1903, the family moved back to Trentino were Pizzinato attended a boarding school in its capital city, Trento. World War I forced Pizzinato to take refuge in Bazzano, in the province of Bologna. After the war she moved back to Milan were she took Italian citizenship and met her future husband Isidoro Papo. In 1939, during the outbreak of World War two, the couple moved to Nice, France, to escape the Fascist regime of Benito Mussolini. They married in France, and after the war, they moved back to Milan. Upon retirement in 1964, the couple moved to Verona, where they finally settled. Mr. Papo died in 1981. The couple never had any children. Pizzinato remained in Verona for the rest of her life; at the time of her death, she lived in a retirement home there.[16][17][18]

On 23 November 2010, marking her 114th birthday, Pizzinato was visited by Italy's president Giorgio Napolitano, who wrote her a letter with the words "In this happy and special occasion I would like to send, on behalf of all Italians, sincere congratulations and good wishes of serenity with her loved ones and people around the community Saint Catherine in Verona".[19]

Vecchiato was born to Maddalena Polo and Giovanni Nardari, in San Cipriano, Veneto, Italy. She lived in Marcon and in Mestre. In recent years she has lived in Roncade. She was married to Giovanni Vecchiato, who died in 1970. The couple had four children.[20]