An orienteer about to "punch" at a control 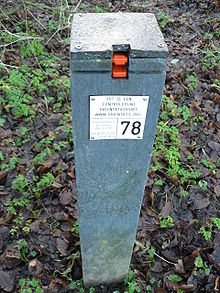 Control on a permanent course
For other uses, see Control point.

For events held under IOF Rules the kite has a triangular form with each face being about 30 cm x 30 cm and coloured white and orange. Most national governing bodies, and related sports, use the same design. The earlier specification used white and red. 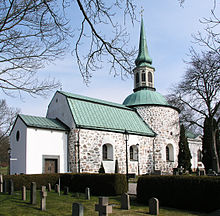 Bromma Church, used as an orienteering control point in 1901 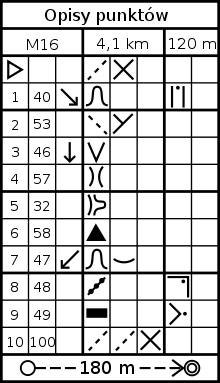 Control description sheet for an orienteering course in Poland 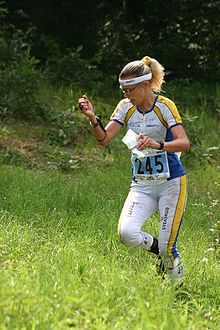 Orienteer reading a description sheet on her right arm

Each competitor is required to carry a control card, and to present it at the Start and hand it in at the Finish. The control card is marked by some means at each control point to show that the competitor has completed the course correctly.

In foot orienteering, the oldest form of orienteering, the first control cards were card stock with a perforated stub, the stub to be handed in at the Start as a safety check. At each control, originally, the control staff or the competitor rubber stamped the control card using a rubber stamp and inkpad kept at that control. Rubber stamps soon were replaced with ticket punches, usually with a different punch shape (circular, square, diamond, star, etc.) at each control. Card stock control cards are in limited use today, having been mostly replaced by weatherproof stock such as Tyvek. Ticket punches have been replaced by needle punches that punch a pattern of small holes in the control card (similar to a perfin).

Weatherproof stock and needle punches are being replaced with electronic punch systems. The orienteer carries a small electronic control card that is a memory card encased in plastic and provided with a strap to attach to the finger. At each control point, and at the Start and Finish too, the orienteer inserts the card into a battery-operated station. There are two principal types of these, SPORTIdent and EMIT. The SPORTIdent control card is a small plastic stick ("e-card" or "e-punch', also "dibber" and "fingerstick").[9] The EMIT control card is a larger, card-shaped stick with a built-in backup feature: a small paper card inside the control card is pierced by a pin in a specific location at each station.

In both electronic punch systems, the control code (number) and punch time at each control point are recorded on the card. At the finish, data on the card are copied to a computer and a receipt is printed to confirm or deny that the course has been completed correctly. A system has been developed to report these data by amateur radio. When a control card is punched, the reporting transmitter sends its own identifier and the orienteer's identifier and punch time. This is received at a base station, often located at the Finish, where the orienteer's progress on the course can be monitored and displayed to spectators.

Notable exceptions to the above control point features occur in several orienteering sports.