Born in London, England at 57 Palace Gardens Terrace,[1] Henry Maximilian Beerbohm was the youngest of nine children of a Lithuanian-born grain merchant, Julius Ewald Edward Beerbohm (1811–1892). His mother was Eliza Draper Beerbohm (d. 1918), the sister of Julius's late first wife. It was a well-to-do London family, and Beerbohm grew up with the four sisters from his father's second marriage. One of these sisters was Agnes Mary Beerbohm (1865–1949), who became Mrs Ralph Neville in 1884; she was a friend of the artist Walter Sickert and modelled for him in his 1906 painting Fancy Dress.[2] He was also close to four half-siblings, one of whom, Herbert Beerbohm Tree, was already a renowned stage actor when Max Beerbohm was a child.[3] Other older half-siblings were the author and explorer Julius Beerbohm[4] and the author Constance Beerbohm. His nieces were Viola, Felicity and Iris Tree.

From 1881 to 1885 Max — he was always called simply 'Max' and it is thus that he signed his drawings — attended the day school of a Mr Wilkinson in Orme Square. Mr Wilkinson, Beerbohm later said, ‘gave me my love of Latin and thereby enabled me to write English’.[5] Mrs Wilkinson taught drawing to the students, the only lessons Beerbohm ever had in the subject.[4] 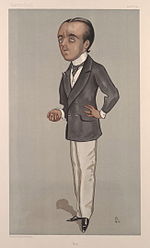 Beerbohm was educated at Charterhouse School and Merton College, Oxford from 1890, where he was Secretary of the Myrmidon Club. It was at school that he began writing. While at Oxford Beerbohm became acquainted with Oscar Wilde and his circle through his brother, Herbert Beerbohm Tree. In 1893 he met William Rothenstein, who introduced him to Aubrey Beardsley and other members of the literary and artistic circle connected with The Bodley Head.[6] Though he was an unenthusiastic student academically, Beerbohm became a well-known figure in Oxford social circles. He also began submitting articles and caricatures to London publications, which were met enthusiastically. In March 1893 he submitted an article on Oscar Wilde to the Anglo-American Times under the pen name 'An American'. Later in 1893 his essay 'The Incomparable Beauty of Modern Dress' was published in the Oxford journal The Spirit Lamp by its editor, Lord Alfred Douglas.[7]

By 1894, having developed his personality as a dandy and humorist, and already a rising star in English letters, he left Oxford without a degree.[3] His A Defence of Cosmetics (The Pervasion of Rouge) appeared in the first edition of The Yellow Book in 1894, his friend Aubrey Beardsley being art editor at the time.

In 1895 Beerbohm went to America for several months as secretary to his brother Herbert Beerbohm Tree's theatrical company. He was fired when he spent far too many hours polishing the business correspondence. There he became engaged to Grace Conover, an American actress in the company, a relationship that lasted several years.

On his return to England Beerbohm published his first book, The Works of Max Beerbohm (1896), a collection of his essays which had first appeared in The Yellow Book. His first piece of fiction, The Happy Hypocrite, was published in The Yellow Book in 1897. Having been interviewed by George Bernard Shaw himself, in 1898 he followed Shaw as drama critic for the Saturday Review,[8] on whose staff he remained until 1910. At that time the Saturday Review was undergoing renewed popularity under its new owner, the writer Frank Harris, who would later become a close friend of Beerbohm's. It was Shaw, in his final Saturday Review piece, who bestowed upon Beerbohm the lasting epithet, "the Incomparable Max"[3] when he wrote, "The younger generation is knocking at the door; and as I open it there steps spritely in the incomparable Max".[9]

In 1904 Beerbohm met the American actress Florence Kahn. In 1910 they married and moved to Rapallo in Italy, partly as an escape from the social demands and the expense of living in London. Here they remained for the rest of their lives except for the duration of World War I and World War II, when they returned to Britain, and occasional trips to England to take part in exhibitions of his drawings. In his years in Rapallo Beerbohm was visited by many of the eminent men and women of his day, including Ezra Pound, who lived nearby, Somerset Maugham, John Gielgud, Laurence Olivier and Truman Capote among others.[10] Beerbohm never learned to speak Italian in the five decades that he lived in Italy.[3]

From 1935 onwards, he was an occasional if popular radio broadcaster, talking on cars and carriages and music halls for the BBC. His radio talks were published in 1946 as Mainly on the Air. His wit is shown often enough in his caricatures but his letters contain a carefully blended humour—a gentle admonishing of the excesses of the day—whilst remaining firmly tongue in cheek. His lifelong friend Reginald Turner, who was also an aesthete and a somewhat witty companion, saved many of Beerbohm's letters.

Beerbohm's best known works include A Christmas Garland (1912), a parody of literary styles, Seven Men (1919), which includes "Enoch Soames", the tale of a poet who makes a deal with the Devil to find out how posterity will remember him, and Zuleika Dobson (1911), his only novel. 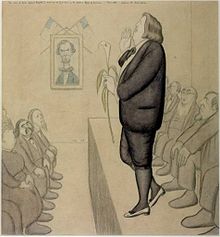 In the 1890s, while a student at Oxford University, Beerbohm showed great skill at observant figure sketching. His usual style of single-figure caricatures on formalized groupings, drawn in pen or pencil with delicately applied watercolour tinting, was established by 1896 and flourished until about 1930. In contrast to the heavier artistic style of the Punch tradition he showed a lightness of touch and simplicity of line. Beerbohm's career as a professional caricaturist began when he was twenty: in 1892 the Strand Magazine published thirty-six of his drawings of ‘Club Types’. Their publication dealt, Beerbohm said, ‘a great, an almost mortal blow to my modesty’.[11] The first public exhibition of his caricatures was as part of a group show at the Fine Art Society in 1896; his first one-man show at the Carfax Gallery in 1901.

He was influenced by French cartoonists such as 'Sem' (fr:Georges Goursat) and 'Caran d'Ache' (Emmanuel Poir).[12] Beerbohm was hailed by The Times in 1913 as "the greatest of English comic artists", by Bernard Berenson as "the English Goya", and by Edmund Wilson as "the greatest...portrayer of personalities - in the history of art".[13]

Usually inept with hands and feet, Beerbohm excelled in heads and with dandified male costume of a period whose elegance became a source of nostalgic inspiration. His collections of caricatures included Caricatures of Twenty-five Gentlemen (1896), The Poets' Corner (1904), Fifty Caricatures (1913) and Rossetti and His Circle (1922). His caricatures were published widely in the fashionable magazines of the time, and his works were exhibited regularly in London at the Carfax Gallery (1901-8) and Leicester Galleries (1911–57). At his Rapallo home he drew and wrote infrequently and decorated books in his library. These were sold at auction by Sotheby's of London on 12 and 13 December 1960 following the death of his second wife and literary executor Elisabeth Jungmann.[12]

His Rapallo caricatures were mostly of late Victorian and Edwardian political, literary and theatrical personalities. The court of Edward VII had a special place as a subject for affectionate ridicule. Many of Beerbohm's later caricatures were of himself.[4] 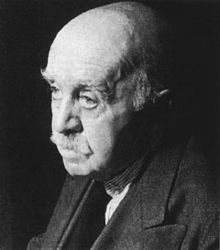 Beerbohm in his later years 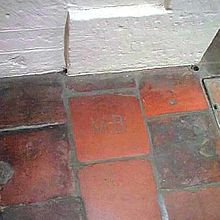 Beerbohm's ashes are interred under the tile marked 'MB'

Beerbohm married the actress Florence Kahn in 1910. There has been speculation that he was a non-active homosexual (Malcolm Muggeridge, who much disliked him, imputed homosexuality to him), that his marriage was never consummated, that he was a 'natural celibate' or even just asexual.[14][15] David Cecil wrote that, "though he showed no moral disapproval of homosexuality, [Beerbohm] was not disposed to it himself; on the contrary he looked upon it as a great misfortune to be avoided if possible." Cecil quotes a letter from Beerbohm to Oscar Wilde's friend Robert Ross in which he asks Ross to keep Reggie Turner from the clutches of Lord Alfred Douglas, "I really think Reg is at a rather crucial point of his career - and should hate to see him fall an entire victim to the love that dare not tell its name."[16] The fact is that not much is known of Beerbohm's private life.

Evelyn Waugh also speculated that Beerbohm had made a mariage blanc with Florence Kahn, but added, 'Beerbohm remarked of Ruskin that it was surprising he should marry, without knowing he was impotent.' Waugh also observed, 'the question is of little importance in an artist of Beerbohm's quality.'[17]

There was also some speculation during his lifetime that Beerbohm was Jewish. Muggeridge assumed that Beerbohm's Jewishness was certain. Beerbohm responded to the allegation by saying that, disappointingly for him, he was not. However, both of his wives were German Jews. When asked by George Bernard Shaw if he had any Jewish ancestors, Beerbohm replied: "That my talent is rather like Jewish talent I admit readily... But, being in fact a Gentile, I am, in a small way, rather remarkable, and wish to remain so."[16] In his poem Hugh Selwyn Mauberley Ezra Pound, a neighbour in Rapallo, caricatured Beerbohm as 'Brennbaum', a Jewish artist.[18]

He was knighted by George VI in 1939; it was thought that this token of esteem had been delayed by his mockery in 1911 of the king's parents, about whom he had written a satiric verse. In 1942 the Maximilian Society was created in Beerbohm's honour, on the occasion of his seventieth birthday. Formed by a London drama critic, it was made up of 70 distinguished members, and planned to add one more member on each of Beerbohm's successive birthdays. In their first meeting a banquet was held to pay homage to the great man, and he was presented with seventy bottles of wine.[3]

He died at the Villa Chiara, a private hospital in Rapallo, Italy aged 83, shortly after marrying his former secretary and companion, Elisabeth Jungmann.[19]

Beerbohm was cremated in Genoa and his ashes were interred in the crypt of St. Paul's Cathedral, London on 29 June 1956.

In the BBC 1982 Playhouse drama Aubrey, written by John Selwyn Gilbert, Beerbohm was portrayed by actor Alex Norton. The drama followed Aubrey Beardsley's life from the time of Oscar Wilde’s arrest in April 1895, which resulted in Beardsley losing his position at The Yellow Book, to his death from tuberculosis in 1898.[20] 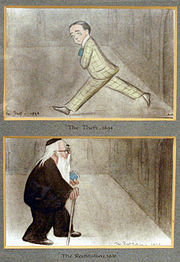 Two of Beerbohm's self-portraits. "The Theft" depicts him stealing a book from the library in 1894. "The Restitution" shows him returning that book in 1920.