Special Branch is a label customarily used to identify units responsible for matters of national security in British and Commonwealth police forces, as well as in the Royal Thai Police. A Special Branch unit acquires and develops intelligence, usually of a political nature, and conducts investigations to protect the State from perceived threats of subversion—particularly terrorism and other extremist activity.

The first Special Branch, or Special Irish Branch, as it was known, was a unit of London's Metropolitan Police formed in March 1883 to combat the Irish Republican Brotherhood. The name became Special Branch as the unit's remit widened. 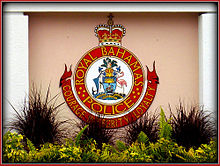 The Security and Intelligence Branch, also known as Special Branch, is the main domestic intelligence and security service in the Commonwealth of the Bahamas. It is mandated is to perform intelligence operations inside the Bahamas to ensure the safety of Bahamian citizens and foreigners. The branch is also mandated to perform background checks on persons who have been recruited for jobs such as police officers and defence force officers and to check persons up for promotions.[1] The Director of the Security Intelligence Branch holds the title "Assistant Commissioner".[2]

The Special Branch of the Royal Hong Kong Police Force was disbanded in 1995, prior to the transfer of the sovereignty of Hong Kong in 1997.[3] Units of SB were re-assigned under the Security Wing (Department B) - Crime and Security.

The SB consisted of two wings:

The Security Wing was revived after the 1997 transfer of sovereignty and is now responsible for the Very Important Person Protection Unit. As for the former, it was eliminated and all related information was deleted to prevent it from being transferred to Chinese hands.

The Special Branch unit of the Fiji Police Force is classed as one of the best intelligence unit in the Asia Pacific region. Similar to their Commonwealth counterparts, the Fijian Special Branch deals with matters of national security. They facilitate Interpol, Counter Terrorism, surveillance, Anti-espionage and VIP Protection units. Entry into Special Branch is usually by recruitment. Even though it is a Police unit, Special Branch originally also recruits from the Republic of Fiji Military Forces.

The unit's name has changed to the Fiji Police Intelligence Bureau on 2009.[4] According to the Fijian government, this was done due to the "impact of modern crimes with other unlawful and illegal activities in national development demands dramatic changes in the Force."[5] This was also done while the police force was being modernized.[5]

The Special Branch is a separate wing in the state police forces in India. Like their counterparts in the United Kingdom, they deal with matters of state security. However more serious espionage detection etc., are done by the Intelligence Bureau (IB), India's internal security agency.

There have been many allegations that the Special Branch is used by the ruling government (and the political party) for setting up surveillance on their political opponents. The Special Branch has its own Detective Constables, Head Constables, Inspector rankings and superior police officer rankings. Every police station is to have a Special Branch head constable or Assistant Sub-Inspector (ASI) (working plain clothes or Mufti), he would be observing the society in general, and also taking reports from the uniformed police constables on general patrol. The special branch staff play a very important role in collecting advance intelligence about law and order matters as well as illegal activities like ganja plantation/transportation, illicit arracks, etc. They forward the information to the respective Superintendents of police for necessary action.

For more details on this topic, see Special Detective Unit.

Ireland (i.e. the Republic of Ireland) is not part of the Commonwealth or the United Kingdom. However, there is a Special Branch of the Garda Síochána, now called the Special Detective Unit (SDU), or in Irish, Aonad Speisialta Bleachtaireachta.

For more details on this topic, see Malaysian Special Branch.

The Malaysian Special Branch (Malay: Cawangan Khas) is an intelligence agency attached to the Royal Malaysian Police (RMP). The SB is empowered to acquire and develop intelligence on internal and external threats to the nation, subversive activities, extremist activities and activities of sabotage and spying. It is also empowered to analyse and advise on the necessary course of action to the various departments and agencies both within the Police Department and other related agencies.

The BSAP developed its Special Branch in the early 1950s amid growing unrest within African communities protesting slow progress towards racial equality. During the period of the Federation of Rhodesia and Nyasaland, also known as the Central African Federation (CAF) 1953–63, that brought the self-governing and virtually independent British colony of Southern Rhodesia into a federation with the British protectorates of Northern Rhodesia (Zambia) and Nyasaland, (Malawi) the political nature of Special Branch became a source of tension between the BSAP and different police forces in the northern territories. Following the dissolution of the CAF and the refusal of the British government to grant independence to Southern Rhodesia without more progress towards multiracial democracy, the predominantly white electorate of Southern Rhodesia backed a Unilateral Declaration of Independence in 1965. London instructed all Southern Rhodesian civil servants, including the police, to stay at their posts while the white settler rebellion was resolved diplomatically. Under Emergency Powers, Special Branch became the principal internal security agency in the "phoney war" with Zimbabwean guerrillas 1966–72, serving as a model for and establishing strong links with South Africa's Special Branch. As the Chimurenga or Bush War gathered force after 1972, Special Branch developed the Selous Scouts, an undercover tracker battalion of 1,500 troops, 80 percent black, many having been recruited from captured guerrillas facing trial and possible execution, and also "pseudo guerrillas" such as the Mozambican National Resistance (RENAMO) to disrupt Zimbabwe African National Liberation Army (ZANLA) camps across the border in Mozambique.[6] However, as the war turned against the white settler regime, the lead role of Special Branch was taken over by the Central Intelligence Organisation and Rhodesian Army intelligence. Following the transition to independent Zimbabwe in 1980, some Special Branch members were incorporated within the South African security services, while others found ready employment in the Persian Gulf states.[citation needed]

During Apartheid, the South African Police Services Special Branch was a much feared[citation needed] police unit often used to attack movements resisting apartheid. It is now the Crime Intelligence Unit which investigates crime but which continues to investigate groups perceived to be enemies of the state such as social movements[citation needed].

The Special Branch of Ceylon (now Sri Lanka) was created in late 1966 tasked with national security as an intelligence agency attached Ceylon Police Force. This was closed down in 1970.

A Special Branch division exists under the Royal Thai Police, serving as its main intelligence unit.[7] Aside from doing intelligence, they also provide close protection support to VIPs[8] alongside the Bangkok Metropolitan Police Bureau (MPB) and Armed Forces Security Centre.[9] They handle matters that have anything to do with citizenship such as the renunciation of Thai nationality,[10][11] including the handling of passports.[12] Foreign nationals living in Thailand go to the Special Branch office to secure a Thai police clearance certificate.[13][14] Other cases such as lèse majesté, terrorism and anything that endangers Thai national security are also handled by the Thai SB.[15][16][17]

They have worked together with the Malaysian Special Branch during the Cold War.[18] During that time, SB officers were involved in the Red Drum Massacre, in which 3,008 accused of being pro-communist were burned to death from 200-litre red drums alive or semi-conscious and incinerated during the administration of Prime Minister Thanom Kittikachorn.[19]

The SB was accused of human rights violations toward Falun Gong practitioners.[20][21] They are also being touted as a means of routing political opposition against the government.[22] The division was also accused of interfering in political matters.[23]

The first Special Branch in the world was formed in London, and it has spread throughout the United Kingdom of Great Britain and Northern Ireland. Each British police force has formed its own Special Branch, the largest being that of the Metropolitan Police until it was merged with another unit, forming Counter Terrorism Command or SO15. Special Branch maintain contact with the Security Service. Although they are not part of the Criminal Investigation Department (CID), they are entitled to use the prefix "Detective" in front of their ranks.

Special Branch has responsibility for, amongst other things, personal protection of (non-royal) VIPs and performing the role of examining officer at designated ports and airports, as prescribed by the Terrorism Act 2000.

The intelligence work of Special Branch is overlooked in some circles. This is because its role sits somewhere between that of the Security Service and that of the Metropolitan Police Anti-Terrorist Branch (SO13). Special Branch officers are usually the ones to perform arrests of suspected spies, since MI5 officers are not authorized to take such actions; an example being the Portland Spy Ring.

It was announced, in September 2005, that the Metropolitan Police Special Branch would be merging with the Anti-Terrorism Branch of the Metropolitan Police to form a new department called Counter Terrorism Command,[24] with the new department coming into being on 2 October 2006,[25] thus completing a process begun when the investigative wing of the Special Branch X squad became The Anti-Terrorist Branch in 1972.

Most, if not all UK police services still maintain a Special Branch. Strathclyde Police maintained a Special Branch until it was renamed the Counter Terrorist Intelligence Section.[26]

"The current keepers of the Special Branch’s archives, which could shed light on the history of police behavior toward the radicals of the [late 19th century], keep access to the relevant records 'tenaciously guarded' even now."[27]