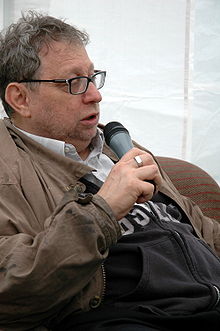 Danny Schechteris a television producer, independent filmmaker, blogger, and media critic who writes and lectures frequently about the media in the United States and worldwide. He specializes in investigative journalism and producing programming about the interfaces among human rights, journalism, popular music and society. In all, Schechter has reported from 49 countries. He was the recipient of the Society of Professional Journalists' 2001 Award for Excellence in Documentary Journalism.

Schechter was a civil rights worker and the communications director of the Northern Student Movement, and served as a "community organizer" in a War on Poverty program. Schechter also worked as an assistant to the Mayor of Detroit in 1966.

Schechter has lengthy experience in the major U.S. corporate media. His career began as the "News Dissector" at Boston radio station WBCN. Later, Schechter was a producer for the ABC newsmagazine 20/20. He produced 50 segments for ABC and won two Emmy Awards and was nominated for two others for this work. Schechter joined the start-up staff at CNN as a producer in Atlanta. Schechter helped found and served as the executive producer of Globalvision, a New York-based television and film production company. He founded and executive-produced the series South Africa Now and co-produced Rights & Wrongs: Human Rights Television. From 1999-2010, Schechter was also the executive editor and "blogger-in-chief" at the now-defunct MediaChannel.org, for which he wrote a nearly-3000-word daily blog on media and society.

Schechter has produced and directed many television specials and documentary films, including:

Schechter has also published a number of books, including: