O'Kelly was born in Dublin at 55 Wellington Street[1] in the north inner-city Dublin. He was educated at the Richmond Street Irish Christian Brothers School, a short walk away. O'Kelly joined the National Library of Ireland in 1898 as a junior assistant.[citation needed] The same year, he joined the Gaelic League, becoming a member of the governing body in 1910 and General Secretary in 1915.

O'Kelly joined Sinn Féin, then a small dual-monarchist, capitalist party, immediately at its inception in 1905. He became an honorary secretary of the movement from 1908, remaining in the post until 1925. In 1906 he was elected to Dublin Corporation, and retained the seat until 1924.

In March 1915, O'Kelly went to New York City, to inform Clan Na Gael of the plans for a rising in Dublin by the Irish Volunteers. Pádraig Pearse appointed O'Kelly to be his Staff Captain in preparation for whenever the insurrection would take place.[citation needed]

After the Easter Rising in 1916, O'Kelly was gaoled, released, and re-arrested. He escaped from detention in Fairfield in Britain, and returned to Ireland.[citation needed]

MP in the 1918 general election

O'Kelly was elected Sinn Féin Member of Parliament (MP) for Dublin College Green in the 1918 British general election. Along with other Sinn Féin MPs he refused to take his seat in the British House of Commons. Instead they set up an Irish parliament, called Dáil Éireann, in Dublin. O'Kelly served as Ceann Comhairle (Speaker) of the First Dáil.

He also served as the Irish Republic's envoy, demanding recognition of the Republic and its admittance to the post-World War I peace treaty negotiations at Versailles. While this request to Clemenceau was sincere, it naively ignored the fact that France and Britain had been allied for the previous four years.[2][3] In May 1920 he sent a memorandum on the Irish political situation to Pope Benedict XV.[4]

O'Kelly was a close associate of Éamon de Valera, who served variously as President of Dáil Éireann/Príomh Aire (prime minister from April 1919 to August 1921) and President of the Republic (from August 1921 to January 1922). As with de Valera, he opposed the Anglo-Irish Treaty signed by representatives of the British and Irish Republic's governments in December 1921.

When de Valera resigned as President of the Republic on 6 January 1922, O'Kelly returned from Paris to Ireland to try to negotiate a compromise, whereby de Valera could return to the presidency. A furious de Valera turned down the offer and ordered O'Kelly to return to Paris.

During the Irish Civil War, O'Kelly was in jail until December, 1923. Afterwards he spent the next two years as a Sinn Féin envoy to the United States.

A founder of Fianna Fáil

In 1926 when de Valera left Sinn Féin to found his own republican party, Fianna Fáil, O'Kelly followed him, becoming one of the party's founding members. In 1932, when de Valera, having won that year's general election, was appointed President of the Executive Council (prime minister of the Irish Free State) he made O'Kelly his deputy as Vice-President of the Council. He was also named Minister for Local Government. O'Kelly earned a controversial reputation over his key role in attempts to publicly humiliate the then Governor-General of the Irish Free State, James McNeill. Stunts such as withdrawing the Irish Army's band from playing at diplomatic functions which the Governor-General attended, or in one notorious case the sight of O'Kelly and Defence Minister Frank Aiken storming out of a diplomatic function at the French Legation when McNeill, the guest of honour, had arrived, damaged O'Kelly's reputation and image, particularly when the campaign backfired.

McNeill published his correspondence on the issue with de Valera making de Valera appear foolish, before resigning and leaving de Valera with the task of choosing a new Governor-General, an embarrassing situation for a politician who had tried his best to avoid any association with the office. To the surprise of many, O'Kelly's was not among the names considered for the office. It is not known for certain, but suspicion rests on O'Kelly's controversial membership of a right-wing Roman Catholic organisation, the Knights of Columbanus, which de Valera suspected had a source in the cabinet. The talkative, tactless, fanatically religious whiskey-drinking O'Kelly matched the bill, perhaps through indiscretions rather than deliberate actions. However O'Kelly was not made Governor-General, the post instead going to the former Fianna Fáil TD, Domhnall Ua Buachalla from County Kildare, who would be the last Governor-General.

Considered for President of Ireland in 1938

In 1938, again O'Kelly's position in cabinet became a focus for speculation, as rumours swept Leinster House (the seat of Parliament) that de Valera intended making O'Kelly the Fianna Fáil choice to become President of Ireland, the office which had replaced the governor-generalship in the new Irish constitution, Bunreacht na hÉireann. Again the justification for de Valera nominating one of his senior ministers for the Presidency, were rumours that someone in cabinet was, either deliberately or accidentally, letting information slip to the Catholic Church through the Knights of Columbanus.[citation needed]

De Valera had on a number of occasions ordered O'Kelly to resign from the Knights, only to find that he would rejoin later. However, the apparent entry of the popular Lord Mayor of Dublin, Alfie Byrne, into the presidential race (in fact he eventually failed to get nominated) and the belief that neither O'Kelly nor any other politician could beat Byrne (ironically a close friend of O'Kelly) led to all party agreement, on the opposition Fine Gael's suggestion, that the office go to Douglas Hyde, a Protestant Irish man, as a thank you for his contribution to Irish society. Irish language enthusiast who had founded the Conradh na Gaeilge, known in English as the Gaelic League, a cultural organisation promoting the preservation of the Irish language, music, dancing and traditions.

O'Kelly was appointed Minister of Finance in 1939. He secured the passing of The Central Bank Act in 1942.[5] On 17 July 1942 at the fifth and final stage of the Dáil debate on the "Central Banking Bill", he argued that the owner of the credit issued by the Central Bank of Ireland, should be the private property of the joint stock banker and not the property of the people of Ireland. This debate was carried out when only five Deputies were present in the Dáil.[6] 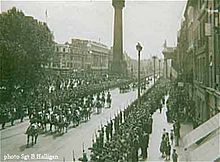 The Inauguration of Seán T. O'Kelly as President of Ireland in 1945.
The 2nd Cavalry Squadron of the Blue Hussars escort the President, who travelled in the late Queen Alexandra's landau. The Landau and the Hussars were later scrapped. 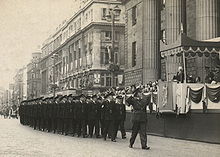 President Seán T. O'Kelly, An Tóstal, 1954.
Outside the GPO, President O'Kelly receives the salute from the new Garda recruits during the Tostal celebrations of 1954.

O'Kelly left the cabinet in 1945 when he was elected President of Ireland in a popular vote of the people, defeating two other candidates. O'Kelly's most famous faux pas occurred during a state visit to the Vatican, when in a breach with standard protocol, he told the media of Pope Pius XII's personal opinions on communism. The resulting row strained relationships between Pope Pius and Joseph Stalin.

O'Kelly was elected unopposed to the presidency a second time in 1952. During his second term he visited many nations in Europe and addressed the United States Congress in 1959. He retired at the end of his second term in 1959, to be replaced by his old mentor, Éamon de Valera.

O'Kelly did not refer any Bills to the Supreme Court under Article 26 of Bunreacht na hÉireann. He convened a meeting of the Council of State in 1947, to consider whether Part III of the Health Bill, 1947 — which provided the basis for the Mother and Child Scheme — should be referred, but he decided against doing so.[7]

He dissolved the Dáil on four occasions (in 1948, 1951, 1954 and 1957). On each occasion the Taoiseach who advised him to do so (de Valera in the first and third cases, and John A. Costello in the other two) had not been formally defeated in a Dáil vote in a manner showing a loss of support by a majority of TDs. Therefore, under Article 13.2.3° of Bunreacht na hÉireann, O'Kelly had no discretion to refuse to act on their advice to dissolve. A more complex case occurred however in 1949 when the First Inter-Party Government was defeated in a snap Dáil vote on a financial measure due to the absence of a number of Government TDs. O'Kelly was advised by the Secretary to the President, Michael McDunphy that had Costello requested a dissolution, he could have refused it. However Costello, on the basis that the loss of the vote was accidental (due to a mistake by the party whips), not evidence of a shift in voting, opted to reintroduce the measure the following morning, rather than seek a dissolution. With all Deputies present this time the Government won the vote. McDunphy later changed his mind and in the files on the event concluded that the President could not have refused a dissolution because the loss had merely been a technical loss, not an actual decision by the Dáil to vote against the government.[citation needed]

O'Kelly was the first Irish president to visit the United States, from 16–31 March 1959. He was invited to address both houses of Congress. This was important to Ireland as it showed that the new republic and its head of state were recognised by the United States.[8] Historian Joe Lee has stated that the visit signified an end to a period of distrust between Ireland and the United States following World War II. Both Ireland and America had been neutral countries when the war began, but the U.S. joined the conflict in 1941. That Ireland continued to remain neutral annoyed American politicians during the war, and afterwards. The invitation to President O'Kelly to address Congress meant that Ireland had been forgiven by the larger power.[9]

O'Kelly's longstanding association with Roman Catholicism proved controversial. At key times he was suspected by de Valera of being the "Church's man" in the cabinet, either deliberately or accidentally leaking information to the Knights of Saint Columbanus.[citation needed] O'Kelly made a point of ensuring that his first state visit, following the declaration of the Republic of Ireland in 1949, was to the Vatican to meet Pope Pius XII, a visit which, as mentioned, became mired in controversy when the famously talkative O'Kelly inadvertently revealed the Pope's private views on communism. Consequently he was not awarded the papal Order of Christ which he coveted.[citation needed] O'Kelly's passion for demonstrating his Roman Catholic beliefs on all possible occasions led him to be referred to as a creeping Jesus.[10]

Éamon de Valera worried about O'Kelly's drinking habits, which were much commented on during his career. O'Kelly drank a lot, and often, yet his behaviour remained dignified and above reproach and he never caused any scandal.[11] The author, Monsignor Pádraig Ó Fiannachta, reported that President O'Kelly kept barrels of draught Guinness stout on tap in Áras an Uachtaráin.[12]

O'Kelly was a short man with a tall second wife.[13][14] When attending a football match once in Croke Park, he was on the field to throw in the ball. A member of the crowd shouted, "Cut the grass, we can't see the President!"[15] 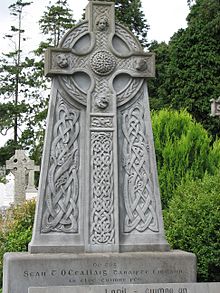 On his retirement as president in 1959, he was described as a "model President" by the normally hostile Irish Times newspaper. Though controversial, the diminutive O'Kelly was widely seen as a genuine and honest, albeit tactless.

He died on 23 November 1966, at the age of 84, fifty years after the Easter Rising that first brought him to prominence. He is buried in Glasnevin Cemetery, Dublin.

He was survived by his second wife, Phyllis, whom he married in 1936. Phyllis lost her first baby and was unable have any more.[16] His first wife was Phyllis' sister, Mary Kate Ryan of Tomcoole, County Wexford.

Mary Kate and O'Kelly were married from 1918 until her death, aged 56, in 1934. They had no children. One of Mary Kate and Phyllis's brothers was Fianna Fáil minister, James Ryan while another sister was married to Fine Gael leader General Richard Mulcahy.