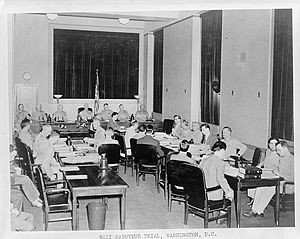 Operation Pastorius was a failed plan for sabotage via a series of attacks by Nazi German agents inside the United States. The operation was staged in June 1942 and was to be directed against strategic U.S. economic targets. The operation was named by Admiral Wilhelm Canaris, chief of the German Abwehr, for Francis Daniel Pastorius, the leader of the first organized settlement of Germans in America.

Recruited for the operation were eight Germans who had lived in the United States. Two of them, Ernst Burger and Herbert Haupt, were American citizens. The others, George John Dasch, Edward John Kerling, Richard Quirin, Heinrich Harm Heinck, Hermann Otto Neubauer, and Werner Thiel, had worked at various jobs in the U.S.

Their mission was to stage sabotage attacks on American economic targets: hydroelectric plants at Niagara Falls; the Aluminum Company of America's plants in Illinois, Tennessee, and New York; locks on the Ohio River near Louisville, Kentucky; the Horseshoe Curve, a crucial railroad pass near Altoona, Pennsylvania, as well as the Pennsylvania Railroad's repair shops at Altoona;[1] a cryolite plant in Philadelphia; Hell Gate Bridge in New York; and Pennsylvania Station in Newark, New Jersey. They were given a quick course in sabotage techniques, given nearly $175,000 in American money and put aboard two submarines to land on the east coast of the U.S.

Amagansett Coast Guard station at Atlantic Avenue Beach in Amagansett, New York. The station was moved in 1966 to a private residence to protect it from demolition. In May 2007, the structure was moved back to near its original location.

Before the mission launched, it was in danger of being compromised, as George Dasch, head of the team, left sensitive documents behind on a train, and one of the agents when drunk announced to patrons of a Paris bar that he was a secret agent.[2]

On 13 June 1942, the first submarine (U-202 the Innsbruck)[3] landed in Amagansett, New York, which is about 115 miles east of New York City, on Long Island, at what today is Atlantic Avenue beach. It was carrying Dasch and three other saboteurs (Burger, Quirin, and Henck). The team came ashore wearing military uniforms so that if they were captured they would be classified as prisoners of war rather than spies. They also brought ashore, and buried, enough explosives, primers, and incendiaries to support an expected two-year campaign in the sabotage of American defense-related production.[4] When Dasch was discovered amongst the dunes by an unarmed Coast Guardsman, John C. Cullen (d. 2011), Dasch seized Cullen by the collar, threatened him, and stuffed $260 into Cullen's hand.[5] Cullen reported the encounter to his superiors after returning to his station. By the time the Coast Guardsmen had armed themselves and returned to the site, the Germans, weary from their trans-Atlantic trip, had taken a train into New York City.

The other four-member German team headed by Kerling landed without incident at Ponte Vedra Beach, Florida, south of Jacksonville on June 16, 1942. They came on U-584, another submarine.[6] This group started their mission by boarding trains to Chicago, Illinois and Cincinnati, Ohio.

Two of the Germans in New York, Dasch and Burger, had decided to defect to the United States immediately. Dasch went to Washington, D.C., and turned himself in to the Federal Bureau of Investigation. He was dismissed as a crackpot by numerous agents until he dumped his mission's entire budget of $84,000 on the desk of Assistant Director D. M. Ladd. At this point he was taken seriously and interrogated for hours.[7] None of the others knew of the betrayal. Over the next two weeks, Burger and the other six were arrested. All eight were put on trial before a seven-member military tribunal on specific instructions from President Franklin D. Roosevelt. They were charged with 1) violating the law of war; 2) violating Article 81 of the Articles of War, defining the offense of corresponding with or giving intelligence to the enemy; 3) violating Article 82 of the Articles of War, defining the offense of spying; and 4) conspiracy to commit the offenses alleged in the first three charges.

Lawyers for the accused, who included Lauson Stone and Kenneth Royall, attempted to have the case tried in a civilian court but were rebuffed by the Supreme Court of the United States in Ex parte Quirin, a case that was later cited as a precedent for the trial by military commission of any unlawful combatant against the United States. The trial was held in the Department of Justice building in Washington. All eight defendants were found guilty and sentenced to death. Roosevelt commuted Burger's sentence to life and Dasch's to 30 years, because they had turned themselves in and provided information about the others. The others were executed on 8 August 1942 in the electric chair on the third floor of the District of Columbia jail and buried in a potter's field called Blue Plains in the Anacostia area of Washington. In 1948, President Harry S. Truman granted executive clemency to Dasch and Burger on the condition that they be deported to the American Zone of occupied Germany.

This publication has a photo of the grave marker the American Nazi Party erected in Blue Plains.