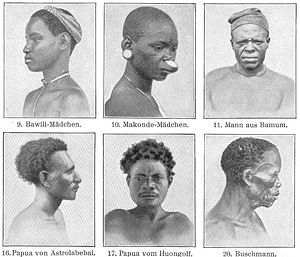 Negroid types according to Meyers Blitz-Lexicon, published in 1932

Negroid is a term sometimes used by forensic anthropologists and physical anthropologists to refer to populations that share certain phenotypic traits such as high Melanin levels (dark skin) and skeletal features associated with ancestry from Sub-saharan Africa.[1]

It was introduced by early Racial science used to refer to the "black race", one of the proposed three major races of human kind. Since the concept of race has been largely abandoned as a useful way to describe human biological variation the term have become mostly obsolete,[2] The word is formed by the base word "Negro" and the suffix "-oid" which means "resembling". Although especially Forensic anthropologists continue to use them in some contexts, outside of forensic anthropology the term mongoloid is now often considered derogatory, and racist.[3] [4]

The term has both Greek and Latin etymological roots. It literally translates as "black resemblance" from negro/niger (black), and -oeidēs, equivalent to -o- -o- + -eidēs having the form of, derivative of eîdos form.[5] The earliest recorded use of the term "Negroid" came in 1859.[6] In modern use, the term is associated with "the division of mankind represented by the indigenous peoples of central and southern Africa".[7] 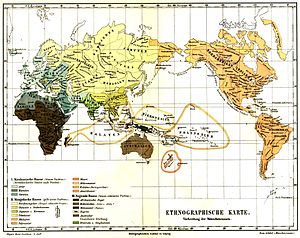 The three great races according to Meyers Konversationslexikon of 1885-90. The subtypes of the Negroid race are shown in brown tones.

In the 19th century and first half of the 20th century, the traditional subraces of the Negroid race were regarded as being the Nilotic race, the Sudanic race (also called "West Africans", i.e., all those belonging the Niger–Congo peoples who are not Bantus), the Bantu race, the Pygmy race and the Khoisan (always referred to as "Hottentots and Bushmen" before the 1960s) [8] (the Khoisan by the 1960s became regarded as a separate race known as the Capoid race, as noted above).

Milkica Nešić et al. of the Department of Physiology at the University of Niš, Serbia, said the "frequency of hair" in "peoples of the Caucasus" is "significantly higher than" in "Negroid populations".[9]

Ashley Montagu lists "neotenous structural traits in which...Negroids [generally] differ from Caucasoids... flattish nose, flat root of the nose, narrower ears, narrower joints, frontal skull eminences, later closure of premaxillary sutures, less hairy, longer eyelashes, [and] cruciform pattern of second and third molars."[10] Ashley Montagu claimed that in the "extinct" "Negroid" group called the "Boskopoids" "pedomorphic traits" proceeded further than in other Negroids.[10] Montagu claimed that the Boskopoids had larger brains than modern man (1,700 cubic centimeters compared to 1,400 cubic centimeters of modern-day man) and the projection of their mouth was less than in other Negroids.[10] Montagu claimed the Boskopoids were the ancestors of the Bushmen.[10]

Use in physical anthropology

In physical anthropology the term is one of the three general racial classifications of humans — Caucasoid, Mongoloid and Negroid. Under this classification scheme, humans are divisible into broad sub-groups based on phenotypic characteristics such as cranial and skeletal morphology.

Later extensions of the terminology, such as Carleton S. Coon's Origin of Races, placed this theory in an evolutionary context. Coon divided the species homo sapiens into five groups: Caucasoid, Capoid, Congoid, Australoid and Mongoloid, based on the timing of each taxon's evolution from homo erectus.[11][12] Positing the Capoid race as a separate racial entity, and labeling the two major divisions of what he called the Congoid race as being the "African Negroes" and the "Pygmies", he divided indigenous Africans into these two distinct groups based on their date of origin, and loosened classification from mere appearance — however, this led to disagreement between approaches to dating divergence, and consequent conflicting results.[12][13] Cavalli-Sforza also accepts this twofold division, pointing out that the Pygmies are have a very different genetic signature than other Black Africans, so they must have originally had their own now unknown language, but have since adopted the language of the Bantu peoples around them. Cavaill-Sforza does not accept as Coon did that each race evolved separately; he accepts the currently dominant paradigm, the Out of Africa theory, i.e. that all human beings are descended from small bands of people that migrated out of Africa beginning about 60,000 years ago.[page needed]

In modern craniofacial anthropometry, Negroid describes features that typify skulls of Black people. These include a broad and round nasal cavity; no dam or nasal sill; Quonset hut-shaped nasal bones; notable facial projection in the jaw and mouth area (prognathism); a rectangular-shaped palate; a square or rectangular eye orbit shape;[14] and large, megadontic teeth.[15] Still widely used internationally in the identification of human remains, some have challenged its accuracy in different human populations which have developed in close proximity to one another and those of mixed ethnic heritage. For example, one recent study of ancient Nubian crania concluded:

The term Negroid is commonly associated with notions of racial typology which are currently being disputed by a majority of anthropologists.[17] For modern usage it is generally associated with racial notions, and is discouraged, as it is potentially offensive.[7] The term "Negroid" is still used in certain disciplines such as craniometry, epidemiology and forensic archaeology[dubious – discuss]. Even in a medical context, some scholars have recommended that the term Negroid be avoided in scientific writings because of its association with racism and race science.[18] This mirrors the decline in usage of the term Negro, which fell out of favor following the campaigns of the American civil rights movement — the term Negro became associated with periods of legalized discrimination, and was rejected by African Americans during the 1960s for Black.[7]

Coon's evolutionary approach was criticized on the basis that such "sorting criteria" do not (in general) produce meaningful results, and that evolutionary divergence was extremely improbable over the given time-frames.[19] As Monatagu (1963) said,