The Nantucket series (also known as the Nantucket trilogy or the Islander trilogy[1]) is a set of alternate history novels written by S. M. Stirling. The novels focus on the island of Nantucket which was transported back in time to 1250 BC due to something called "The Event". Shortly thereafter a conflict develops between the democratic Republic of Nantucket and a group of renegade Americans led by the ex-Coast Guard lieutenant William Walker (inspired directly by the real William Walker).[citation needed] The series was nominated for the Sidewise Award for Alternate History in 2000.[2] 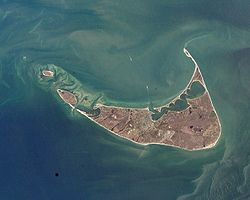 In the three novels of the Nantucket series, a cosmic disturbance characterized by an elliptical dome of fire (called "The Event" in the series) transports the island of Nantucket and its inhabitants back in time into the Bronze Age. The world of circa 1250 BC, which corresponds to the late Heroic Age of Greek mythology, is populated by a large variety of hunting, nomadic and agricultural people, as well as well-documented Bronze Age cultures including Egypt, the Hittites, and Mycenaean Greece. The trilogy describes the day-to-day problems of adaptation and survival and the emotional and social trauma of losing connection with the modern world. Much of the plot deals with ongoing conflicts between the different factions of the island's population. Some Nantucket residents wish to dominate the world for their own benefit, others wish to interact with local populations through trade and cultural development, while most just want to survive, work hard, and claw their way back to something approaching their pre-Event way of life.

As the series progresses, it becomes clear to Nantucket's scaled-down Government that sitting back and reinventing isolationism will only profit those renegades who, under the leadership of ex-Coast Guard lieutenant William Walker, have fled the island to live like gods amongst the Bronze Age peoples of Europe and the Middle East. Walker—who, unfortunately, is as smart as he is callous—exploits the 'magic' of gunpowder, iron-forging, and the spinning-jenny to build up an empire of his own, one that will inevitably conquer and enslave the entire world unless the people of Nantucket build an army, a navy, and a set of foreign alliances of their own and take the fight to Walker.

By the end of the third book, Nantucket is the dominant member of a sizable and expanding network of allies, rather reminiscent of the British Empire (though Britain itself is called "Alba" in the novel, one of Nantucket's protectorates and a source of "warrior tribes" to be enrolled as mercenaries in its armies), and the Nantucketars ("Eagle-People", "Islanders", "Nan-Tukh-Tar", etc.) seem well on their way to re-enacting the United States’ Manifest Destiny three thousand years early. 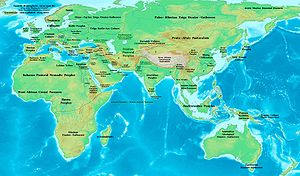 The world near the time Nantucket arrived

Nantucket has 'Outport' colonies spanning the globe, with bases in the Caribbean, Argentina, the Azores, South Africa, Zanzibar, Madagascar, Mauritius, Bombay, etc.; basically, anywhere there is a good harbor situated close to existing or future trading routes, the Republic is on the scene. The Alban Alliance rules the British Isles where Walker initially tried to carve out a kingdom, and are a close ally, a source of labor and military recruits, and, as its people absorb more of the New Learning, look like being at the heart of a very early Industrial Revolution. Babylon, Hittite Empire and Mitanni (a vassal of Babylon), are also allies, though how long that will last now that they have arms industries of their own is anyone's guess, even with an Islander military officer married to Babylon's ambitious young king. At the end of the third book, these allies are already laying plans for carving up the Caucasus and Persia between them.[9]

There also appears to be a threat growing out in Central Asia, where Walker's lone surviving heir and a convoy of mostly Achaean rejectionists have chosen to carve out a new empire in the Fergana Valley region, far, far away from the reach of Islander naval power.

Connections to the Emberverse series

Stirling has confirmed that The Emberverse series, is connected to the Nantucket series.[12] Evidence of this is apparent throughout the novels, for more information, see here.