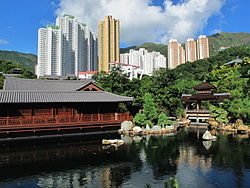 Diamond Hill (Chinese: 鑽石山; pinyin: Zuànshí shān; Cantonese Yale: Jyunsehk Sāan) is a hill in Kowloon, Hong Kong. The name also refers to the area on or adjacent to the hill. It is surrounded by Ngau Chi Wan, San Po Kong, Wong Tai Sin and Tsz Wan Shan. Its northeast is limited by the ridge. It is principally a residential district.

Contrary to its name, the area does not contain any diamond deposits. There are a number of theories as to why the misnomer came about, but the most accepted version states that the English name for this area was a simple mistranslation, for in Cantonese, the word "鑽石" can mean either "diamonds" or "to drill for rocks". In this case, the area was known as a stone quarry for many years before urban development took place.

There are other theories as to why the area became known as "Diamond Hill", such as the crystals contained within the rocks mined from the area have a diamond-like luminance, or that the hill resembles the shape of a diamond.

The village settlements in the area, Sheung Yuen Leng (上元嶺) and Ha Yuen Leng (下元嶺), predated British colonization, and may have been established as early as the early eighteenth century.

There were squatter dwellings (shanties) up and down the hill that were demolished after years effort by the Hong Kong Government. The squatter population peaked at around 50,000 people[1]. Parts of the squatter settlement were demolished over the years, including for expansion of the Kai Tak Airport during the Japanese occupation, construction of the Mass Transit Railway, Lung Cheung Road, and the Tate's Cairn Tunnel. Due to the dramatic shortage of public housing available for resettlement, the final sections were only demolished in 2001.

Galaxia (星河明居) is a private housing estate located at 3, Lung Poon Street, near the Diamond Hill Station. Galaxia comprises 5 blocks (A-E). There are 46 floors in Block A and E and 47 floors in Block B, C and D, making a total of 1,684 units. Galaxia is connected to the Plaza Hollywood shopping centre.

It was constructed in 1998, developed by Wheelock Properties (Hong Kong) Limited, The Wharf (Holdings) Limited, New Asia Realty And Trust Company, Limited and Harriman Realty. In 2008, ISS Eastpoint took the place of Harriman Realty in the Galaxia consortium.

Diamond Hill Urn Cemetery is high in the hill. Diamond Hill MTR Station is located near Plaza Hollywood, a nearby shopping centre was so named to associate it with the former movie studio nearby, where many films were produced after World War II.

The Buddhist Chi Lin Nunnery and Nan Lian Garden (南蓮園池) were built according to the style of the Tang Dynasty and are tourist attractions.