The 2011 FIFA U-20 World Cup (Spanish: Copa Mundial Sub-20 de la FIFA Colombia 2011) was the eighteenth edition of the FIFA U-20 World Cup since its inception in 1977 as the FIFA World Youth Championship. Colombia hosted the tournament between 29 July and 20 August 2011, with matches being played in eight cities. The tournament was won by Brazil who claimed their fifth title.[1][2]

At a FIFA Executive Committee meeting held in Sydney on 26 May 2008, Colombia beat the only other candidate country, Venezuela, for the right to organize the U-20 World Cup.[3] It was suggested by the then-Vice President, Francisco Santos Calderón, that it was needed to withdraw from the race with Brazil to host the 2014 FIFA World Cup so they could concentrate on hosting the "best possible games".[4]

In an inspection tour of development works in March 2010, Jack Warner, (then vice president of FIFA), said that the completion of this tournament could provide Colombia with a launch pad to become a possible host for the 2026 FIFA World Cup. The official song of World Cup U-20 Colombia 2011 is "Nuestra Fiesta" by Colombian singer Jorge Celedón.[5] 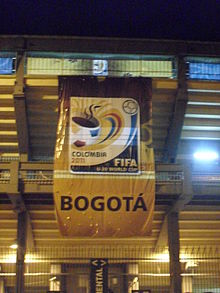 In late 2009 the Colombian Football Federation unveiled the budget for conducting the event, to be COP 150 billion[6] (USD 75 million). On 30 September 2009, the presidents of both FIFA and Colombia announced that the logo would show a steaming cup of coffee with the colors of the Colombian tricolor.[7] An estimated 1,021,000 tickets have already been sold[citation needed], including a complete sell out of all matches that are to take place at the Estadio Nemesio Camacho in Bogotá.[8][8][9]

Prior to the tournament starting, the Estadio Metropolitano Roberto Meléndez stadium in Barranquilla played host to the Opening Ceremony, involving local musical performances and guests including:

El Campín stadium in Bogotá hosted the Closing Ceremony. The show was in charge of the Ibero-American Theater Festival and Teatro Nacional de Colombia.

The venues that were confirmed on 29 September 2010 are located in Bogotá, Cali, Medellín, Manizales, Armenia, Cartagena, Pereira, and Barranquilla.[10]

During an announcement about the ticketing procedures for Colombian residents, it was confirmed that the opening game would be held at the Estadio Metropolitano Roberto Meléndez in Barranquilla, with the Estadio El Campín hosting the final match.[11]

1.^ Teams that will make their debut.

The draw for the group stage was held on 27 April 2011,[13][14] at the Julio Cesar Turbay Ayala Convention Centre in Cartagena.[15] The seedings were as follows.

The winners and runners-up from each group, as well as the best four third-placed teams, will qualify for the first round of the knockout stage (round of 16).

Where two or more teams end the group stage with the same number of points, their ranking is determined by the following criteria:[16]

Ranking of third place teams in each group are determined by the following criteria, top four advances to the round of 16:[16]

The following awards were given:[17]