The West Side Line, also called the West Side Freight Line, is a line on the west side of the borough of . North of Penn Station, from 34th Street, the line is used by passenger service heading north via Albany to , and . South of Penn Station, a 1.45 mile (2.33 km) elevated section of the line (popularly known as the High Line) has been abandoned since 1980.

The West Side Line was first built by the , which completed the forty miles to Peekskill on , to Poughkeepsie by the end of that year, and extended to Albany in 1851. [ [http://www.catskillarchive.com/rrextra/abnyh.Html Bradbury and Guild, "The Hudson River and the Hudson River Railroad", 1851.] The city terminus was at the junction of Chambers and Hudson Streets; the track was laid along Hudson, Canal, and West Streets, to Tenth Avenue, which it followed to the upper city station, located at 34th Street. Over this part of the right-of-way the rails were laid at grade along the streets, and since by the corporation regulations locomotives were not allowed to run, the cars were drawn by a "dumb engine," which an 1851 description alleged consumed its own smoke. While passing through the city, the train of cars was preceded by a man on horseback, who gave notice of its approach by blowing a horn.

At 34th street, the right-of-way curved into Eleventh Avenue, the dumb engine was detached, and the regular locomotive took the train. As far as 60th Street, the track was at street grade, before the independent roadbed commenced. The first cut was at Fort Washington Point. The railroad crossed on a drawbridge; at that location a wreck occurred with a number of fatalities, 13 January 1882, when the Atlantic Express, stopped on the line, was rear-ended by a local train, telescoping the last two palace cars, where the stoves and lamps were upset and ignited the woodwork and upholstery. [ [http://www.catskillarchive.com/rrextra/wksdfl.Html "Frank Leslie's illustrated Paper", "Fatal Disaster on the Hudson River railroad", 21 January 1882] ]

In 1867 the and Hudson River Railroad were united by , being merged in 1869 to form the . The railroad acquired the former Episcopal church's St. John's Park property and built a large freight depot at Beach and Varick streets which opened in 1868. The tracks to south to Chambers street were then removed. [Joint Report of the New York, New Jersey Port and Harbor development Commission, 1917] In 1871 the opened, and most passenger trains were rerouted into the new via that line along the northeast bank of the and the , also part of the New York Central system. The old line south of Spuyten Duyvil remained for freight to the docks along Manhattan's west side and minimal passenger service to the West Side Station on Chambers Street (used until 1916).

As the city grew, congestion worsened on the west side. Eventually plans were drawn up for a grade-separated line, along with a . Work on the highway (named for Manhattan Borough President who championed it) began in 1925, and the first section was dedicated , . This included a new elevated eight-track several blocks north of the old one, with a south edge at Spring Street. From there an elevated structure carried two tracks north on the west side of Washington Street, curving onto the east side of Tenth Avenue at 14th Street, then crossing Tenth Avenue at 17th Street and heading north along its west side. Just south of the Penn Station s, the line turned west on the north side of 30th Street, then north just east of the . The northernmost bridge crossed 34th Street, and a temporary alignment took it back to Eleventh Avenue at 35th Street. The elevated line was built through the second or third floors of several buildings along the route. Others were served directly by elevated sidings. By 1941 the tracks along Eleventh Avenue were bypassed by a below-grade line, passing under the 35th Street intersection and running north just west of Tenth Avenue before slowly curving northwest, passing under Eleventh Avenue at 59th Street, and rejoining the original alignment.

Until the 1930s the line separated the Upper West Side from the Hudson River. In the 1930s master builder and urban planner covered the line north of 72 Street to the tip of Manhattan. His project called the West Side Improvement was twice as expensive as the and created an expansion of as well as creation of the .North of the new alignment, the and Riverside Park were built above the tracks from 72nd Street north to near 123rd Street. The large served as the dividing point between the two-track realignment and a wider four-track line to the north. North of 123rd Street, the line becomes elevated between the Henry Hudson Parkway and Riverside Drive before returning to the surface and crossing under the Parkway to its west side near 159th Street. It continues along the shore of the to the , a across the (), merging with the just north of the bridge.

In addition to serving the industrial and dock areas of the Lower West Side, the line was the primary route for produce and meat into New York, serving warehouses in the West Village, Chelsea and the Meatpacking District, as well as serving the and private freight services [http://railroad.net/articles/railfanning/westside/index.php 1934 pamphlet]

The was merged into in 1968 and in 1976. Conrail continued to operate freight along the West Side Line until the 1980s.

optioned the in 1974. He was to ultimately build the city's biggest private residential development and donate 22 acres of the yards to the city to form the Riverside Park South extension.

The line itself north of 34 Street was acquired by Amtrak. The southernmost part of the High Line has since been demolished; as of mid-2005, the rest of the High Line is owned by , which acquired it after the 1999 breakup of Conrail.

When new storage yards for the were constructed on the west side of Manhattan in 1986, the project design included a tunnel and switching connections leading to the West Side Line right of way just west of Tenth Avenue, near . Later, when additional funding became available, one track along the northern part of the West Side Line was rebuilt for passenger service as the Empire Connection. A short section of track leading into Penn Station was electrified using and with overhead catenary wire, since s are not allowed to operate in the station tunnel, and a wye was constructed to allow diesels to turn around.

On , , all trains via Albany to New York state points, Canada and the "" started using the new Empire Connection into Penn Station. Prior to that change, all passenger trains from Albany and beyond went into which forced passengers going beyond New York to transfer via shuttle , or via the to reach Penn Station. The move also saved Amtrak the expense of operating two stations in New York. The Empire Connection was double tracked in the mid-1990s.

The layout is such that trains running between Albany and points south would have to reverse direction or turn at . An engine change would be required in any case. Thus all services using the connection terminate at Penn Station, though at the time of building there were proposals for through service onto the . For a time the "Adirondack" from ran through New York to .

is studying ways it could also serve Penn Station. One alternative under study would run some Hudson Line commuter trains into Penn Station via the Empire Connection, possibly with new station stops at West 125th and West 62nd Streets. 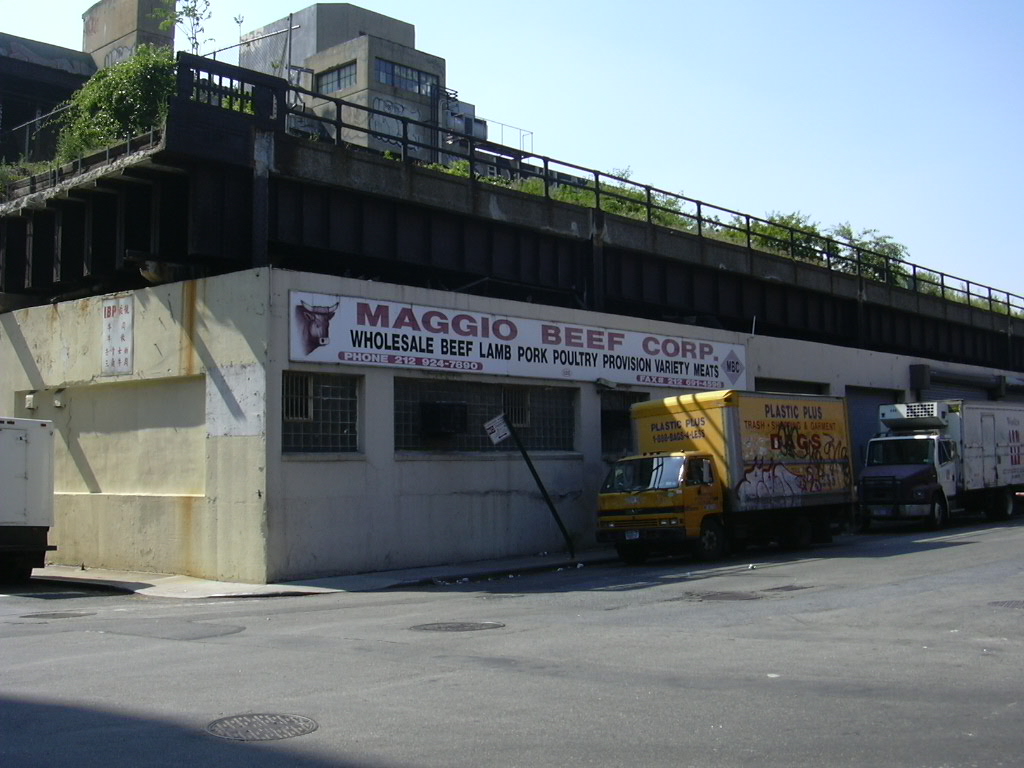 thumb|right|200px|The beginning of the High Line on Washington Street in the Gansevoort Market Historic District.There are plans to restore the elevated structure known as the High Line and reclaim the area as a public open space (or greenway). These plans have been given support from the City of New York, community and design organizations, primarily through the efforts of a non-profit organization called .