The Duchess is a character in Lewis Carroll's Alice's Adventures in Wonderland, published in 1865. Carroll does not describe her physically in much detail, although her hideous appearance is strongly established in the popular imagination thanks to John Tenniel's illustrations and from context it is clear that Alice finds her quite unattractive.

The Duchess is an antagonist of The Queen of Hearts. In her first appearance, the Duchess seems nearly as unpleasant as the Queen herself, but later on treats Alice with friendliness and respect. 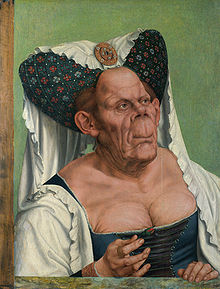 According to Martin Gardner in The Annotated Alice, John Tenniel's drawings of the Duchess were inspired by Quentin Matsys's The Ugly Duchess (c. 1513) in the National Gallery.[1] It has been said that the painting is a portrait of Margarete Maultasch, a countess of the 14th century who had the reputation of being the ugliest woman who ever existed. The painting, however, was done 200 years after her death.

Another possible inspiration for the Duchess is Queen Victoria's mother, the Duchess of Kent, whose pre-coronation machinations and attempts to control her daughter led to her exclusion from her adult daughter's life and near exile. This would explain the antagonism between the two fictional characters as reflections of their models' lives at and around Court. 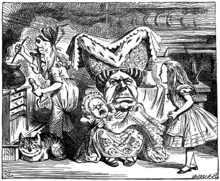 The Duchess with her family

The Duchess lives in Wonderland in a small palace just outside the Caterpillar's forest. She employs a footman who Alice thinks resembles a frog, and a Cook who is addicted to pepper and who throws crockery and kitchen utensils over her shoulder with no concern for those who might be hit. The footman enjoys staring at the sky for days on end, oblivious to most people in or out of the house. The Duchess also has a child and a cat (the Cheshire Cat). Lewis Carroll is not explicit about her physical attributes, but Tenniel's drawings illustrate an ugly and grotesque woman with an extremely large head. Her character is strongly voluble; at times she even seems to have a double personality. When she first meets Alice in her kitchen, she shows herself to be nervous, aggressive, and not disposed to interact. She recites one of the more well-known rhymes in the book, when she advocates beating a child for sneezing:

As the Cook has absolutely saturated the kitchen with pepper, and the baby sneezes constantly, one can only conclude he has probably suffered quite a bit at his mother's hands. Taking pity on the child, Alice spirits him away, only to find that he has transformed into a pig. It is never explained why this happens, but Alice looks on the bright side, concluding that while the baby wasn't a very attractive baby, it makes for a good-looking pig.

Of the Duchess' household, the Cat appears to be by far the most balanced and sensible, although it states that—like everyone else in Wonderland—it is mad. How the Cat came to live with the Duchess is, like so many other matters in Wonderland, a mystery. Later, when the Cat meets up with Alice, it appears it has left the Duchess for good.

When Alice meets the Duchess for the second time at the Queen's croquet party, the Duchess is much more chatty and almost flirtatious, seemingly determined to charm the young girl for reasons unknown. She repeatedly places her chin firmly on Alice's shoulder, which Alice finds disturbing as well as uncomfortable, as the Duchess has a very sharp, pointy chin. (In Kurt Vonnegut's novel Breakfast of Champions he also has a character do this, and Vonnegut breaks the fourth wall to tell readers that it is a direct homage to this famous scene with the Duchess.[citation needed]) Even so, Alice begins to suspect that the Duchess might actually have a pleasant personality after all, and that her earlier ruthlessness was caused by the pepper. In any case, the Duchess has no concern for her baby now that he's become a pig.

The Duchess is often seen as a child's-eye-view of emotionally volatile and mysterious adults, switching back and forth between dark moods and condescending affection at unpredictable times.

The Duchess' Cook is a fictional character in Alice in Wonderland she lives in the Duchess' Palace which is just outside the Caterpillar's forest. She is obsessed with pepper and throws it all over the place causing the Baby to sneeze constantly. She also smashes plates everywhere.

In the Tim Burton film, the Cook is Thackery Earwicket (March Hare) and the Duchess is the White Queen. The March Hare shares many of her characteristics such as he, like her, enjoys smashing plates and throwing pepper.