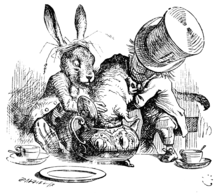 The March Hare and the Hatter put the Dormouse's head in a teapot. Illustration by John Tenniel.

The Dormouse is a character in "A Mad Tea-Party", Chapter VII [1] from Alice's Adventures in Wonderland by Lewis Carroll. He sat between the March Hare and the Hatter. They were using him, while he slept, as a cushion when Alice arrives at the start of the chapter.

The Dormouse is always falling asleep during the scene, waking up every so often, for example to say:

`You might just as well say,' added the Dormouse, who seemed to be talking in his sleep, `that "I breathe when I sleep" is the same thing as "I sleep when I breathe"!'

He also tells a story about three young girls who live in a treacle well, live on treacle, and draw pictures of things beginning with M, including mousetraps, memory and muchness.

Eventually the Hatter and the March Hare put his head in a teapot. He later appears, equally sleepy, at the Knave of Hearts' trial and voices resentment at Alice for growing, and his last interaction with any character is his being "suppressed" (amongst other things) by the Queen for shouting out that tarts are made of treacle.

The Dormouse is referenced in popular culture by two American rock bands: Firstly by Jefferson Airplane in the song "White Rabbit", in which the last line of the song, repeated twice and building through a crescendo is "Remember what the dormouse said: feed your head, feed your head". Secondly by the progressive metal band Queensrÿche in the song "Right Side of My Mind": "Re-engineer your head is really what the dormouse said". The British rock band Radiohead also refer to the dormouse in the song "Knives Out" with the lyrics, "Catch the mouse/ Don't look down/ Shove it in your mouth" and "Cook him up/ Squash his head/ Put him in the pot".

The Dormouse makes an appearance in American McGee's Alice, where he and the March Hare are held captive as the Mad Hatter's experiments. He is tied to a dissection table and continues to fall asleep from the Hatter's medicines. The Dormouse also appears in the 2011 game Alice: Madness Returns, where he captures a part of the Mad Hatter as revenge for the events in American McGee's Alice.

In the SyFy TV Miniseries Alice, the Dormouse is a sidekick of the Hatter.

The character also appears in Disney's Alice in Wonderland. Like in the book, he is sleepy and lazy, but unlike in the book, he sings Twinkle, Twinkle, Little Bat instead of his story about mouse sisters to entertain the tea-party participants. He panics at the mention of the word "cat", much like The Mouse from the book and needs to have jam spread on his nose in order to calm down. The Disney version of the character also appears in Bonkers, House of Mouse and Mickey's Magical Christmas: Snowed in at the House of Mouse.

In Tim Burton's 2010 Alice in Wonderland film, the Dormouse is named Mallymkun. Unlike the sleepy character in the book, this Dormouse is an action-oriented swordswoman similar to the character Reepicheep from the Chronicles of Narnia. She is voiced by Barbara Windsor. She is seen the first time with the group Alice first meets in Wonderland, and saving Alice from the Bandersnatch by plucking out its eye. She is seen a second time at the March Hare's tea party having tea with the March Hare and the Hatter. She is seen a third time rescuing the Hatter from the Red Queen. She is seen a fourth time at the end, fighting the Red Queen's forces. According to the official Alice in Wonderland guide, Mallymkun is secretly in love with the Hatter.