Madridejos is a 4th class municipality in the province of Cebu, Philippines. It is one of the three municipalities that make up the island of Bantayan located on the western portion of the northern tip of mainland Cebu. It is bounded on the south by the municipality of Bantayan, Cebu, and on all other sides by the Visayan Sea. According to the 2000 census, it has a population of 30,673 people. It has a land area of 23.95 square kilometers. 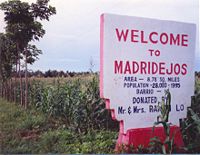 Lawis was the old name of Madridejos. In fact, even up to the present, the less young among the people still use the name Lawis. In the vernacular term of “Peninsula”, the portion carved out to constitute the Municipality of Madridejos being the peninsula located on the Northern side of Bantayan Island facing the Visayan Sea. The first fisherman, Lazaro Mangubat, came to live in Mancilang, Lawis after discovering the place as one of the rich fishing grounds of the country. The general scenery of Lawis was that of a quiet place, of Virgin grounds covered by small shrubs and lantana. When more people discovered Lawis and flocked to it, the place became a visita. In 1889 when Pedro Benito Romero De Madridejos, the Archbishop of Cebu, came to visit the place, Father Juan Alcoseba, then the curate of the place, renamed Lawis to Madridejos in his honor.

The town's feast day is celebrated annually on December 8.

The main industries of Madridejos are fishing, poultry and tourism.

Because of its rich fishing grounds, Madridejos earned the name of Little Alaska of the Philippines and as a matter of fact the first canning factory in the country was established in Madridejos, but it lost its sustaining impact in the history of the municipality after it was bombed during World War II. At present, poultry raising is a booming industry and Madridejos contributes a substantial quantity of eggs produced for sale to the neighboring provinces.

Madridejos is administratively subdivided into 14 barangays.

How to Get There

The Quick Directions page from Cebu City to Bantayan Island is here at wowBantayan.com, complete with Bus/Boat/Beach photography (real world travel times via Cebu City Bus are 3hrs. including a short restroom stop in Carmen or elsewhere) and 75 min. (1hr/15min) via the Island Shipping or SuperShuttle Ferry Hagnaya to Santa Fe.