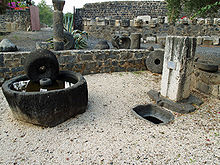 An olive mill and an olive press dating from Roman times in Capernaum, Israel.

Olive oil extraction is the process of extracting the oil present in the olive drupes for food use. The oil is produced in the mesocarp cells, and stored in a particular type of vacuole called a lipo vacuole, i.e., every cell contains a tiny olive oil droplet. Olive oil extraction is the process of separating the oil from the other fruit contents (vegetative extract liquid and solid material). It is possible to attain this separation by physical means alone, i.e., oil and water do not mix, so they are relatively easy to separate. This contrasts with other oils that are extracted with chemical solvents (generally hexane).[1] The first operation when extracting olive oil is washing the olives, to reduce the presence of contaminants, especially soil which can create a particular flavour defect called "soil taste". 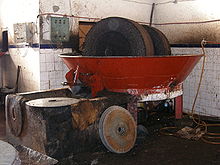 Grinder with two millstones and in the foreground several fiber disks 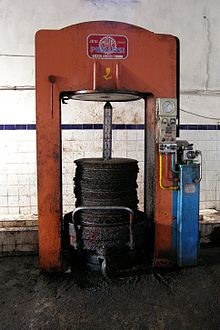 Press with stack of fiber disks

People have used olive presses since Greeks first began pressing olives over 5000 years ago.[citation needed] Extant Roman era olive presses survive to the present time, with a notable collection present at Volubilis in Morocco.[2] An olive press works by applying pressure to olive paste to separate the liquid oil and vegetation water from the solid material. The oil and vegetation water are then separated by standard decantation.

This basic method is still widely used today, and it is still a valid way of producing high quality olive oil if adequate precautions are taken.

First the olives are ground into an olive paste using large millstones. The olive paste generally stays under the stones for 30 to 40 minutes. This has three objectives:

Rarely, olive oil mills use a modern crushing method with a traditional press.

After grinding, the olive paste is spread on fiber disks, which are stacked on top of each other, then placed into the press. Traditionally the disks were made of hemp or coconut fiber, but in modern times they are made of synthetic fibers which are easier to clean and maintain.

These disks are then put on a hydraulic piston, forming a pile. Pressure is applied on the disks, thus compacting the solid phase of the olive paste and percolating the liquid phases (oil and vegetation water). The applied hydraulic pressure can go to 400 atm.

To facilitate separation of the liquid phases, water is run down the sides of the disks to increase the speed of percolation.

The liquids are then separated either by a standard process of decantation or by means of a faster vertical centrifuge.

The traditional method is a valid form of producing high quality olive oil, if after each extraction the disks are properly cleaned from the remains of paste; if not the leftover paste will begin to ferment, thereby producing inconsistencies of flavors (called defects) that will contaminate the subsequently produced olive oil. A similar problem can affect the grindstones that, in order to assure perfect quality, also require cleaning after each usage.

Proper cleaning produces higher quality oil. Grindstones, while ancient in design, are a suitable way to grind olives, because this method breaks up the drupe's pulp while only slightly touching the nut and the skin. This reduces the release of the oil oxidation enzymes present in these organs. In addition, in this extraction method, the introduction of water is minimal when compared to the modern one, thus reducing the washing-off of the polyphenols. The exhausted paste, called pomace, has a low content of water making it an easier residue to manage.

The modern method of olive oil extraction uses an industrial decanter to separate all the phases by centrifugation. In this method the olives are crushed to a fine paste. This can be done by a hammer crusher, disc crusher, depitting machine or knife crusher. This paste is then malaxed for 30 to 60 minutes in order to allow the small olive droplets to agglomerate. The aromas are created in these two steps through the action of fruit enzymes.

Afterwards the paste is pumped in to an industrial decanter where the phases will be separated. Water is added to facilitate the extraction process with the paste.

The decanter is a large capacity horizontal centrifuge rotating approximately 3000 rpm, the high centrifugal force created allows the phases to be readily separated according to their different densities (solids > vegetation water > oil). Inside the decanter's rotating conical drum there is a coil that rotates a few rpm slower, pushing the solid materials out of the system.

Diagram of a working decanter. The three phases are separated according to their densities

Three, two, and two and a half phases decanters

With the three phases oil decanter, a portion of the oil polyphenols is washed out due to the higher quantity of added water (when compared to the traditional method), producing a larger quantity of vegetation water that needs to be processed.

The two phases oil decanter was created as an attempt to solve these problems. Sacrificing part of its extraction capability, it uses less added water thus reducing the phenol washing. The olive paste is separated into two phases: oil and wet pomace. This type of decanter, instead of having three exits (oil, water and solids), has only two. The water is expelled by the decanter coil together with the pomace, resulting in a wetter pomace that is much harder to process industrially. Many pomace oil extraction facilities refuse to work with these materials because the energy costs of drying the pomace for the hexane oil extraction often make the extraction process sub-economical. In practice, then, the two phases decanter solves the phenol washing problem but increases the residue management problem. This residue management problem has been reduced by the collection of this wetter pomace and being transported to specialized facilities called extractors which heat the pomace between 45ºc and 50ºc and can extract up to a further 2 litres per 100 kilos of pomace using adapted two phase decanters.

The two and a half phases oil decanter is a compromise between the two previous types of decanters. It separates the olive paste into the standard three phases, but has a smaller need for added water and also a smaller vegetation water output. Therefore the water content of the obtained pomace comes very close to that of the standard three phases decanter, and the vegetation water output is relatively small, minimizing the residue management issues.

The Sinolea method to extract oil from the olives was introduced in 1972;[3] in this process, rows of metal discs or plates are dipped into the paste; the oil preferentially wets and sticks to the metal and is removed with scrapers in a continuous process. It’s based on the different surface tension of the vegetation water and the oil, these different physical behaviors allow the olive oil to adhere to a steel plaque while the other two phases stay behind.

Sinolea works by continuously introducing several hundreds of steel plaques in to the paste thus extracting the olive oil. This process is not completely efficient leaving a large quantity of oil still in the paste, so the remaining paste has to be processed by the standard modern method (industrial decanter).

Many oils are marketed as first cold pressed or cold extraction, this is a denomination describing the temperature at which the oil was obtained.

In the EU these designations are regulated by article 5 of Commission Regulation (EC) No 1019/2002 of 13 June 2002 on marketing standards for olive oil. This article states that in order to use these designations the olive oil bottler must prove that the temperature of malaxation and extraction was under 27 °C (80 °F).

For olive oil bottled outside EU countries this regulation does not apply, and thus the consumer has no assurance that these statements are true.

Some producers, in order to maximise product quality, choose to combine the traditional grinding method, the stone mill, with a modern decanter. This technique produces more selective grinding of the olives, reduces the malaxation time olive paste, and avoids the complicated cleaning of the olive press fibre disks. Because the use of the stone mill requires a loading and unloading phase, this extraction method is discontinuous, i.e., there are times when all the machinery is stopped, therefore it is generally not used on a large commercial scale, being applied only by small scale olive mills producing high quality olive oil.

High quality olive oil can be obtained by all the methods if proper measures are taken. Olive oil quality is equally dependent on the quality of the olives themselves and on the time they have to wait from harvesting to extraction, in addition to the extraction method itself.

The two worst “enemies” of olive oil are oxygen and light. Once an olive is harvested, it should be pressed within 24 hours. Oxidation begins immediately upon harvesting. In the period between harvest and grinding, the fruits' enzymes are very active and increasingly degrade the endogenous oil, and therefore oil obtained after a longer wait is of lower quality, presenting higher acidity (oleic acid percentage).

In addition, if additional oxygen is allowed to interact with the olive paste during the extraction process, the acidity level will increase further. Sealed extraction methods are best to prevent the continued introduction of oxygen, as well as light to the oil.

After extraction is complete, in most cases the oil has a cloudy form, mainly due to the presence of minute amounts of water. This type of oil is called cloudy olive oil, or veiled olive oil.

It is common practice that olive oil, or more specifically cloudy olive oil, is stored in cool stainless steel silos with a conical bottom that are pumped free of oxygen. This will ensure the complete precipitation and separation of the two phases and additionally facilate the final stage in olive production, filtration; it will also contribute in the integrity and stability of the oil.

The future of olive extraction points to reducing the negative aspects of the present methods, decreasing the degradation oil produced by the extraction process in itself.