Decoration of the Papal Tiara

Decoration of the Papal Tiara 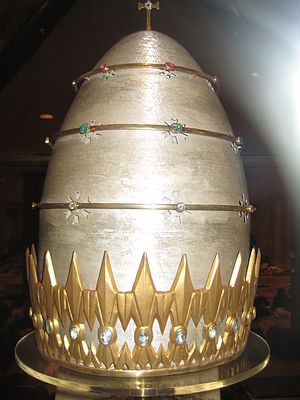 Close up of the papal tiara of Pope Paul VI housed at the Basilica of the National Shrine of the Immaculate Conception in Washington, DC

From the 15th century when the papal tiara received its third and final tier, the decoration of papal tiaras followed a standard format. The Papal Tiara itself was laid out in felt, over which a silver mesh was laid. Onto that mesh, three bands (the three crown) were screwed. Each crown in turn was decorated with rubies, sapphires and other precious jewels. The tiara was topped off with an orb and a crucifix and had lappets attached at the back.

Unlike most monarchies, the papacy did not have one special crown that was used by all popes. In part that was due to the series of destruction of old tiaras that has occurred when at various times Rome had been invaded and papal property, including tiaras, stolen. In part, during the 19th century it was due both to the growing wealth of some Catholic sees, which enabled them to donate expensive new crowns to the papacy when their cardinal was elected pope, and also the political travails of mid and late 19th century popes.

Catholic states like Spain and Belgium donated expensive crowns to Pope Pius IX as symbolic acts of support; following his restoration to Rome after the collapse of the Roman Republic in 1850, and following his loss of Papal States in 1870 respectively, with new tiaras arriving from the Queen of Spain and the women in the Royal Court of the King of the Belgians in 1855 and 1871. Monarchs who had also clashed with the Church, such as Kaiser Wilhelm I of Germany, also used the donation of tiaras as a way to make peace with popes.

Others also donated tiaras to commemorate the jubilees of various popes. The fact that the late 19th century saw the second and third longest papal reigns (to that point) of Pius IX (31 years) and Leo XIII (25 years) provided additional jubilees; their length of time since ordination, length since entering the episcopate, length of papal reign, etc. This period saw the largest accumulation of papal tiaras in modern times, with both popes accumulating 10 tiaras between them, with Leo receiving an unprecedented solid gold tiara in 1903 to commemorate his Silver Jubilee on the papal throne. Leo received two alone to celebrate his Golden Jubilee as a priest, one of which was from Kaiser Wilhelm I of Germany.

It was not just the frequency of the receipt of papal tiaras that increased, but also their value and scale of the decoration. While the sole surviving tiara from before the invasion of Napoleon Bonaparte's troops in 1798 (when all the other tiaras were taken and broken up and their jewels stolen by the troops) is decorated with many jewels, the scale of its decoration pales in comparison to 19th century tiaras, such as that given to Pope Gregory XVI in 1834.

Gregory's heavily decorated tiara was however overtaken in decor both by the tiara given by Queen Isabella II of Spain in 1855 and by the tiara given to Pope Pius IX in 1877 by the Vatican's Palatine Honour guard in honour of his Jubilee.

Value of the tiaras

Some of the tiaras donated were more valuable than others. Among the valuations of tiaras reported are

The tiara of Pope Gregory XVI (given to him in 1834) had three golden circles inlaid with diamonds over the central silver core of the crown, and above each circle a series of golden cloverleaves, inlaid with jewels. (see it being worn by Pius X)

The 1855 tiara donated by Queen Isabella of Spain was probably the most heavily jewel-laiden tiara ever donated, containing 18,000 diamonds, pearls, rubies, emeralds, and sapphires. Pope Pius IX sold it and donated the funds to charity.

The 'Belgian' tiara given to Pope Pius IX in 1871 had its conical shape almost hidden beneath three layers of upright golden decoration inlaid with jewels, making it one of the most unusual tiara in the papal collection. It was made in Bourdon, Ghent (Belgium) from a design by Jean-Baptiste de Béthune. It is decorated with gold, pearls, gilt silver, emeralds, enamel and precious stones.

The 1877 Tiara, the most worn one in the papal collection, and which became in effect the de facto coronation tiara, having been used by among others Pope Benedict XV in 1914, Pope Pius XII in 1939 and Pope John XXIII in 1958 was inlaid with 540 pearls, 90 on each row.

Jewels on other tiaras

The 1887 tiara given by Kaiser Wihelm I was decorated with 1,000 pearls. The 1922 Milan tiara of Pius XI had 2,000 precious stones inlaid, while John XXIII's 1959 tiara had 20 diamonds, 16 emeralds, 68 rubies and 70 pearls. The number was in fact intended to be double that, but John insisted that half the stones planned for his tiara be returned and the savings given to charity.