Male privilege is a sociological term that refers quite generally to the special rights or status granted to men in a society, on the basis of their sex or gender, but usually denied to women and/or transsexuals.

In legal cases alleging discrimination, "sex" is usually preferred as the determining factor rather than "gender", because it refers to biology rather than socially constructed norms which are more open to interpretation and dispute.[1] Greenberg explains that although gender and sex are separate concepts, they are interlinked in that gender discrimination often results from stereotypes based on what is expected of members of each sex.[2] In J.E.B. v. Ala. ex rel. T.B., Justice Scalia distinguished sex and gender

The word ‘gender’ has acquired the new and useful connotation of cultural or attitudinal characteristics (as opposed to physical characteristics) distinctive to the sexes. That is to say, gender is to sex as feminine is to female and masculine is to male.[3]

Thus, biologically "male" privilege is only one of many power structures that may exist within a given society,[4] and levels/manifestations of male privilege differ both between disparate societies as well as in different contexts within the same society. The term "male privilege" does not apply to a solitary occurrence of the use of power, but rather describes one of many systemic power structures that are interdependent and interlinked throughout societies and cultures.[5]

In every aspect of modern life in politics, the law, the churches, the business world, the schools, and the family, the issue of sexual (sometimes gender) discrimination has grown in significance.[citation needed] A core assumption is that sexuality and sexual behaviour are natural outcomes, a simple result of genetics or biology.[citation needed] An alternative view is that sexuality is a social construction, where men and women are nurtured and encouraged to become appropriate members of the ambient society, as decided by the majority. These assigned gender roles carry with them packages of rights and duties, depending on whether the individual is male or female. Baer[6], for example, analyzed gender roles in the U.S.A and suggested that one of the factors slowing down progress towards greater equality has been the low number of women in the higher judicial ranks. Without effective input at a senior level to correct for male bias, she asserts that historical attitudes towards women's physiology limits them in their choice of career, their intellectual maturity, their credibility and their ability to be effective contributors to the advancement of human society.[6]

In Muller v. Oregon 208 U.S. 412 (1908), Brewer J. said: "That woman's physical structure and the performance of maternal functions place her at a disadvantage in the struggle for subsistence is obvious. This is especially true when the burdens of motherhood are upon her. Even when they are not, by abundant testimony of the medical fraternity continuance for a long time on her feet at work, repeating this from day to day, tends to injurious effects upon the body, and as healthy mothers are essential to vigorous offspring, the physical well-being of woman becomes an object of public interest and care in order to preserve the strength and vigor of the race."

Sex- or gender-based differentiation manifests itself differently in different cultural contexts. For example, it is evidenced by the glass ceiling and the wage gap in Western cultures,[7] genital mutilation,[8] dowry-related violence in Asian cultures,[9] and the sexually exploitative trafficking of women and young girls.

Compensation for male privilege takes place in a difficult and ever-changing territory. Most Western countries have enacted laws intended to mitigate the disparity between men and women, including laws which prohibit retaliation ( e.g. Title VII of the Civil Rights Act of 1964, and Notification and Federal Employee Antidiscrimination and Retaliation Act of 2002 (No FEAR) in the U.S.) although these laws have not produced a consistent outcome.

The courts in many countries are male-dominated and as a result only the more obvious abuses of male privilege are subjected to effective scrutiny and remedial action.[6][verification needed]

The disparity between male and female rights in some countries makes murder or ritualised rape an acceptable male response to specified female behaviour and, often, similar male behaviour. Even in countries that formally enact laws to criminalise honour killings, they are rarely prosecuted. For example, Human Rights Watch[10] quotes the Human Rights Commission of Pakistan[11] as reporting that: "The practice of summary killing of a woman suspected of an illicit liaison, known as karo kari in Sindh and Balochistan, is known to occur in all parts of the country. The Sindh government has reported an annual figure of 300 for such killings. HRCP's own findings reveal that in 1997 there were eighty-six karo kari killings in Larkana, Sindh, alone." Stein [12] refers to the guarantees against sex discrimination built into the Indian Constitution, but states that "the most extreme forms of brutality towards women have proved stubbornly resistant to all forms of legal and educational attempts to eradicate them. The past few years have seen the continued growth and practice of dowry which was outlawed in the sixties... and finally in the eighties, attempts to re-establish sati as a justifiable practice." Several cases of sati occur each year, and even when death is avoided, widowhood in high-caste Hindu cultures can still have unfortunate consequences by Western standards. In other countries, women are not allowed out in public unless accompanied by a male relative, to drive cars, or to show their faces. Some of these regulations are based on religious laws, and some on long-standing misogyny. In either case, agitation for change in these societies is generally frowned upon. Several NGOs and women’s groups, however, have been pushing for change within these countries for decades and, in some cases, have achieved and continue to achieve more equitable systems.[5][verification needed]

Male privilege in the U.S. 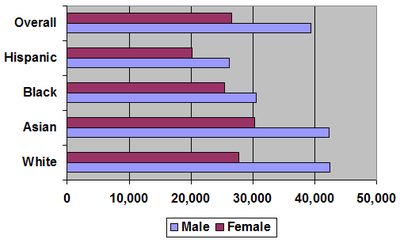 This graph shows the income difference between males and females in the US by race. According to 2005 statistics, White American males made 48% more than White American females.[13]

In Title VII of the Civil Rights Act of 1954, Congress barred discrimination “...against any individual with respect to . . . terms, conditions, or privileges of employment, because of [an individual’s] sex.” Blau and Ferber (1992 at p129) report that the female-to-male ratio of earnings of full-time employees was moderately stable at 60% for the first seventy years of the twentieth century.[14] In 1992, earnings of women who worked full-time had risen to 72% of the average earned by men. It's important to note that these statistics do not take into account differences in experience, skill, occupation, education or hours worked as long as it qualifies as full-time work and do not represent an accurate measure of equal pay for equal work. The Federal Glass Ceiling Commission (1995) established by President Bush and Senator Dole found that women remained economically disadvantaged. Per the study, 97% of senior managers in Fortune 1000 corporations were males in 1992. Women held only 3 to 5% of senior level management positions.[15] In 2005, women held 46.5% of U.S. jobs, and earned 72% of the salary of their male co-workers (The Economist July 21, 2005[16]). Neumark et al. (1995) and other studies have found major continuing discrimination in recruitment practices,[17] and in the professions, Wood, et al. (1993) found major disparities in pay for equal work.[18] The Office of Federal Contract Compliance Programs (1995) similarly found that, within educational categories, the economic status of women fell short. The average woman with a masters degree earned the same amount as the average man with an associate degree.[19]

The courts and Congress have permitted the use of statistical evidence where discrimination or "manifest imbalance" is alleged, to establish a prima facie case of unlawful discrimination. Such evidence then shifts the burden of proof to the employer to explain the disparity or otherwise demonstrate that the disparity is not the result of discrimination. Critics of this results based analysis claim that it equates equal opportunity with equal results. Similarly, Johnson v. Transportation Agency 480 U.S. 616 (1987), upheld a voluntary affirmative action plan to correct a "manifest imbalance" demonstrated by statistical evidence in the representation of minorities and women in traditionally segregated job categories. Such an affirmative plan is valid so long as it is temporary and does not unnecessarily restrict rights of male or non-minority employees or create an absolute barrier to their advancement. However, few plans have been adopted and the enforcement of anti-discrimination legislation to correct for male privilege generally is patchy.[20]

Lugones (2003) emphasises that racial discrimination aggravates sexual discrimination because it imposes a false identity (more pernicious than a mere stereotype) on women. U.S. culture adopts "whiteness" as the "unmarked", non-racial norm, and establishes different classes of non-white with varying degrees of additional prejudice.[21] The case of Oncale v. Sundowner Offshore Services, Inc., 523 US 75 (1998) should be noted because it applied Title VII to same-sex sexual harassment with the unanimous finding that Title VII bars all forms of discrimination "because of" sex. Such discrimination, whether motivated by sexual desire or not, is actionable so long at it places its victim in an objectively disadvantageous working condition, regardless of the victim's gender. Now, Smith v. City of Salem 378 F.3d 566 (6th Cir. 2004) has extended protection to the transgendered, and also broadened the interpretation of the statutory criterion "sex" to include "gender."[22]

Against the notion of 'male privilege'

Men's rights activist Herb Goldberg[23], for example, claimed in 1976 that "the myth that the male is culturally favoured ...is clung to, despite the fact that every critical statistic in the area of longevity, disease, suicide, crime, accidents, childhood emotional disorders, alcoholism, and drug addiction shows a disproportionately higher male rate." He sees males as "oppressed by the cultural pressures that have denied him his feelings, by the mythology of the woman and the distorted and self destructive way he sees and relates to her, by the urgency for him to 'act like a man' which blocks his ability to respond ... both emotionally and physiologically, and by a generalized self hate that causes him to [not] feel comfortable ... when he lives for joy and for personal growth."

Conservative activist Phyllis Schlafly and conservative commentator Ann Coulter have argued in the course of their campaign against the Equal Rights Amendment that “of all the classes of people who have ever lived, the American woman is the most privileged. We have the most rights and rewards, and the fewest duties.” [24] As examples, they point to the traditionally nonreciprocal obligation on husbands to financially provide for their wives, legal privileges granted to female employees that men do not have, and women's immunity from conscription into military service.[24]

Warren Farrell’s book, The Myth of Male Power, which Farrell has himself described as “a 500-page debunking of the myth of men as a privileged class” [25] Farrell points to the over-representation of men among groups such as the homeless, suicides, alcoholics, the victims of violent crime and prisoners. He argues that men disproportionately occupy the most dangerous and unpleasant occupations and that “if a man feels obligated to take a job he likes less so he can be paid more money that someone else spends while he dies seven years earlier, well, that's not power.” [26] In addition, he points to spheres of discrimination against men in such spheres as the military draft, family law and the criminal justice system. Far from being privileged, he argues that policies such as conscription, the women and children first convention and the over-representation of men among the most dangerous occupations illustrate men’s status as ‘the disposable sex’.[26]