A head-on collision is one where the front ends of two ships, trains, planes or vehicles hit each other, as opposed to a side collision or rear-end collision.

With rail, a head-on collision often implies a collision on a single line railway. This usually means that at least one of the trains has passed a signal at danger, or that a signalman has made a major error. Head-on collisions may also occur at junctions, for similar reasons.

With railways, the distance required for a train to stop is usually greater than the distance that can be sighted before the next blind curve, which is why signals and safeworking systems are so important.

In U.S. railroad jargon, this type of collision is called a cornfield meet.

Note: if the collision occurs at a station or junction, or trains are travelling in the same direction, then the accident is not a pure head-on collision.

With shipping, there are two main factors influencing the chance of a head-on collision. Firstly, even with radar and radio, it is difficult to tell what course the opposing ships are following. Secondly, big ships have so much momentum, that it is very hard to change course at the last moment. 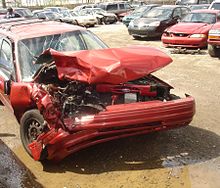 A Ford Escort automobile that has been involved in a head-on collision with a Sport Utility Vehicle.

Head-on collisions are an often fatal type of road traffic accident. U.S. statistics show that in 2005, head-on crashes were only 2.0% of all crashes, yet accounted for 10.1% of US fatal crashes. A common misconception is that this over-representation is because the relative velocity of vehicles traveling in opposite directions is high. It was previously thought that a head-on crash between two vehicles traveling at 50 mph is roughly equivalent to a vehicle hitting a 'wall' (a stationary near-immovable object) at 100 mph. However, experimentation in 2010 showed that due to Newton's Third Law, the actual result of such a collision is equivalent to hitting a stationary near-immovable object at 50 mph[2]

Head-on collisions, sideswipes, and run-off-road crashes all belong to a category of crashes called lane-departure or road-departure crashes. This is because they have similar causes, if different consequences. The driver of a vehicle fails to stay centered in their lane, and either leaves the roadway, or crosses the centerline, possibly resulting in a head-on or sideswipe collision, or, if the vehicle avoids oncoming traffic, a run-off-road crash on the far side of the road.

Preventive measures include traffic signs and road surface markings to help guide drivers through curves, as well as separating opposing lanes of traffic with wide central reservation (or median) and median barriers to prevent crossover incidents. Median barriers are physical barriers between the lanes of traffic, such as concrete barriers or wire rope safety barrier. These are actually roadside hazards in their own right, but on high speed roads, the severity of a collision with a median barrier is usually lower than the severity of a head-on crash.

The European Road Assessment Programme's Road Protection Score (RPS) is based on a schedule of detailed road design elements that correspond to each of the four main crash types, including head-on collisions. The Head-on Crash element of the RPS measures how well traffic lanes are separated. Motorways generally have crash protection features in harmony with the high speeds allowed. The Star Rating results show that motorways generally score well with a typical 4-star rating even though their permitted speeds are the highest on the network. But results from Star Rating research in Britain, Germany, the Netherlands and Sweden have shown that there is a pressing need to find better median, run-off and junction protection at reasonable cost on single carriageway roads.

Another form of head-on crash is the wrong-way entry crash, where a driver on a surface road turns onto an off-ramp from a motorway or freeway, instead of the on-ramp. They can also happen on divided arterials if a driver turns into the wrong side of the road. Considerable importance is placed on designing ramp terminals and intersections to prevent these incidents. This often takes to form of special signage at freeway off-ramps to discourage drivers from going the wrong way. The Manual on Uniform Traffic Control Devices provides instruction on this signage installation in its Section 2E.50.

Sideswipe collisions are where the sides of two vehicles traveling in opposite directions touch. They differ from head-on collisions only in that the errant vehicle impacts the side of the other vehicle rather than the front. Severity is usually lower than a head-on collision, since it tends to be a glancing blow rather than a direct impact. However, loss of control of either vehicle can have unpredictable effects and secondary crashes can dramatically increase the expected crash severity.

Sideswipe collisions are frequently caused by a failure to control a vehicle.