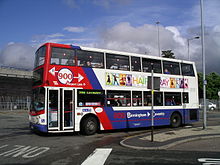 The old "Travel West Midlands" logo, still displayed on 71% of the current fleet

On 26 October 1986, West Midlands Travel Ltd came into existence as part of the deregulation of the bus industry in England and Wales. It was previously the bus operations of the West Midlands Passenger Transport Executive (WMPTE).

In its early years, the operator came under scrutiny over the suspect safety and condition of its vehicles. On 26 October 1992, officials ordered the operator to subject all of its 1,800 vehicles to an MOT test.[1]

In April 1995, the company was purchased by the National Express Group, and rebranded as Travel West Midlands in September 1996. On 9 December 2002, the Coventry services were rebranded Travel Coventry.

The former Travel Your Bus and Travel Merry Hill subsidiaries have been merged into the main fleet.

National Express Group, the parent company, was the subject of takeover interest in 2009, and for a time there was speculation about future ownership of its local bus operations.

Fares used to be roughly linked to distance travelled, but there is now only a standard fare and a cheaper 'short hop' fare on most routes. Cash fares can be bought from the driver on the bus, but no change is given. Child fares are available at half the adult cost. There are no bus conductors, but tickets are often checked by roving inspectors and West Midlands Police's Safer Travel team. Adult fares are currently £1.60 for a journey of up to two fare stages (with each fare stage roughly three stops), and £1.80 for a longer journey.

NXWM generally increases fares at least once a year, with January the month of choice. Fares were increased at the start of 2009, despite falling fuel prices, and the recession. Prices were again increased on 6 June 2010. Even though it has been less than six months since the last increase, from 2 January 2011 fares are set to increase again, with the majority of most fares being increased by 10p. Examples include an adult short hop increasing to £1.60 from £1.50 and a full fare from £1.70 to £1.80. A daysaver ticket will be £3.60, also an increase of 10p from June 2010 and 30p from 2009. The 'Evening Saver' has also now being discontinued.[3]

Senior citizens (aged 60 or over) and disabled persons are eligible for free concessionary travel pass in a similar fashion to that offered in other areas. An add-on ticket can be purchased to extend the concession to cover weekday travel within the West Midlands county before 9:30 am.

Following successful trials in Yardley Wood of the new 'Smart' system for Concessionary Travel Pass holders has now been introduced on all NXWM buses. [2]

Many routes can be traced back to the days of municipal operation, such as service number 11, the Birmingham Outer Circle, which is one of the longest urban services in Europe. However, in certain areas, there have been substantial changes to the service structure, with many new routes introduced.

At the end of April 2008, NXWM in conjunction with Centro, Dudley Council and other operators, re-routed, re-timed, and renumbered buses in the Dudley, Halesowen and Stourbridge areas. A similar process took place in Solihull in January 2009, with one also taking place in October 2009 for South West Birmingham. In April 2010 a network review for Walsall North (Bloxwich, Brownhills & Aldridge) took place, with another taking place at the end of July 2010 for West Birmingham. The first review of 2011 was in March for services in East Birmingham/North Solihull.[4], followed by a review of services in Wolverhampton and West Walsall in July 2011.[5]

NXWM has ten garages - Acocks Green, Bordesley Green, Birmingham Central, Perry Barr, Yardley Wood, Pensnett, Walsall, West Bromwich, Wolverhampton and Coventry, with the latter trading as National Express Coventry. The Bordesley Green garage is the newest location, having opened in 2005 to replace the depot in Hockley which was earmarked for demolition.[6]

The Dudley garage closed on 28 August 1993 to make way for the Dudley Southern By-Pass (which opened in 1999) and was replaced, along with the former Travel Merry Hill depot, by the depot at Pensnett.

In July 2010, NXWM closed its Lea Hall depot. This was a reversal of the previous decision NXWM made, this being to close its newest depot, Bordesley Green, and move the associated offices to the new Birmingham Coach Station as announced in a January 2010 edition of Coach & Bus Week (CBW) magazine.

Crime (such as robbery and assault) and vandalism are an ongoing problem on NXWM buses, with travel on the upstairs deck sometimes being particularly challenging. The installation of CCTV on buses was part of the failed attempt to stabilise the level of crime. In the 2009-10 accounting period, 3,341 incidents were recorded on West Midlands buses, including theft, property damage, and drug possession.[7]

National Express West Midlands is part of the Safer Travel Partnership, created in 2005 its members also include Centro (responsible for bus, train and Midland Metro tram transport in the West Midlands) and West Midlands Police. The partnership is committed to reducing crime and anti social behaviour across the West Midlands bus network whilst providing reassurance to the travelling public. The partnership achieves this through a variety of tactics including Gateway Operations. These operations are intelligence led and are based on the established link between those who evade paying their fare and those responsible for crime, disorder and anti social behaviour. The operation involves partners including NX Revenue Inspectors and Police Officers and Police Community Support Officers from the dedicated Safer Travel Police Team. The activities of the partnership have resulted in very significant reductions in recorded crime across the West Midlands bus network.

Most of the cost of 'Safer Travel' is met from public funds, rather than those of NXWM. This contrasts with most commercial enterprises, such as football clubs, which have to pay a substantial amount for policing.

The 'Safer Travel' name is also used for presentations for schools 'educating children about how to respect their buses'.

The 'See Something, Say Something' campaign, where passengers are encouraged to anonymously send information about nuisance behaviour on buses by text message, has led to 134 arrests and a cut in crime of 15% since April 2010. Crime on the West Midlands bus network has fallen to its lowest level in the last five years.[8] 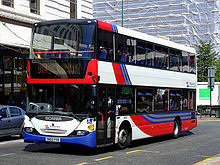 4697, the prototype double-deck Scania OmniCity in the "toothpaste" Travel West Midlands livery, which was used for a short while before the new National Express West Midlands one was introduced

National Express West Midlands is one of the largest bus operators in the UK, with a fleet of nearly 1600 vehicles, carrying near 1 million passengers a day. A variety of bus types are used, including double-decks, single-decks, articulated 'bendy' buses, and mini-buses.[9]

National Express West Midlands aimed for the whole fleet to be low floor by March 2010.[10] This was achieved in July 2010, with the withdrawal of the final MCW Metrobuses in operation at Acocks Green garage.[11]

In 2011 National Express West Midlands is investing in new greener vehicles, with the addition of 120 new buses to the fleet, including 18 'hybrid' vehicles. Alexander Dennis will supply 9 Enviro 400H hybrid-power double-deck models alongside 50 EEV-approved diesel Enviro 400 double-deck models, while Volvo will supply 9 B5LH Wrightbus Eclipse Gemini 2 hybrid-power double deck models, with 52 B7RLE single-deck models. The new buses were to be progressively introduced to various garages from September 2011[12], however due to some delays these buses are only now beginning to enter service in November 2011, with the full rollout expected to be complete early in 2012.