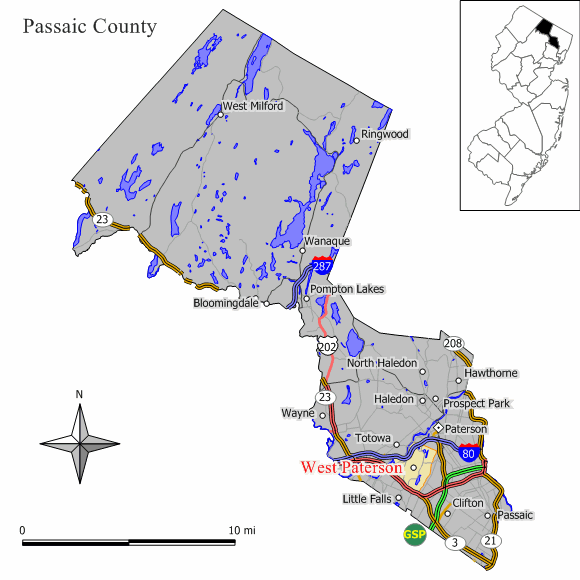 West Paterson was formed as a borough by an Act of the on , , from portions of Little Falls Township, based on the results of a referendum held on , .

As of the 2000 census, 34.3% of West Paterson residents were of Italian ancestry, the 18th-highest percentage of any municipality in the United States, and seventh-highest in New Jersey, among all places with more than 1,000 residents identifying their ancestry. [ [http://www.epodunk.com/ancestry/Italian.html Italian Communities] , . Accessed , .]

There were 4,397 households out of which 26.9% had children under the age of 18 living with them, 53.9% were married couples living together, 10.8% had a female householder with no husband present, and 31.2% were non-families. 25.5% of all households were made up of individuals and 8.2% had someone living alone who was 65 years of age or older. The average household size was 2.49 and the average family size was 3.01.

The Borough of West Paterson was chartered by the State of New Jersey to function under a variation of the Faulkner Act's, Small Municipality Plan C of the Option Municipal Charter Law form of government. The government consists of a Mayor and a Borough Council comprising six council members, with all positions elected at large. A Mayor is elected directly by the voters to a three-year term of office. The Borough Council consists of six members elected to serve three-year terms on a staggered basis, with elections take place in a three-year cycle, with the mayor elected one year and three council seats up for election in years two and three. ["2005 New Jersey Legislative District Data Book", , April 2005, p. 148.] A government reorganization takes place on of every year, at which time a mayor-elect or newly elected council members are sworn in.

The Mayor exercises executive power and appoints department heads with Council approval. The Council may adopt the municipal budget proposed by the Mayor, but revisions may be required by a majority of the governing body before final approval.

The Garrett Mountain campus of is located in West Paterson.

Notable current and former residents of West Paterson include:
*, former MLB catcher who played most of his career with the . [ [http://www.njleg.state.nj.us/legislativepub/digest/20070510.htm New Jersey Legislative Digest] , . Accessed , . "TO BE A MEMBER OF THE NEW JERSEY HALL OF FAME ADVISORY COMMISSION: Rick Cerone, of West Paterson *NOT* Fort Lee."]