The Deperdussin Monocoque was an early aircraft built in 1912 by the Société Pour les Appareils Deperdussin, commonly abbreviated "SPAD". It is so named because of the method of construction of its fuselage. Designed as a racing aircraft, it was a single-seated monoplane with a streamlined shape . The aircraft is noted for winning the Gordon Bennett Trophy in 1912, and also for being the first aircraft to exceed 100 miles (160 km) per hour,[1][2] Later, when powered with the first examples of the 160 hp Gnome Double Lambda engine, it was able to reach a 125 miles (201 km) an hour.[3]

The concept behind the aircraft is attributed to Louis Béchereau, the company's head of design. His design was remarkable because of the innovative construction technique of the fuselage. Instead of using a braced box-girder covered in fabric, then the usual method of building an aircraft's fuselage, three layers of tulip wood were built up over a former. This former was then removed, leaving only the shell. This method of construction became known as the "monocoque fuselage", and the idea of a load-carrying shell was later to become the dominant approach to fuselage construction.[1] The craft was further streamlined by the use of a large spinner over the hub of the propeller.

The Deperdussin Monocoque proved very successful in competition. The design won the Gordon Bennett Trophy, the inaugural Schneider Trophy race (although the 1913 Schneider Trophy winner was only partly of monocoque construction, having a more conventional rear fuselage), successfully defended its title in the 1913 Gordon Bennett race, where it also broke the world speed record of the time, with a speed of approximately 203 km/h (126.7 mph).[1]

However, despite the model's revolutionary speed and design, the trend towards the physically stronger biplane design resulted in few orders from customers. [1]

Later adaptions and versions of the Deperdussin Monocoque line included a seaplane. 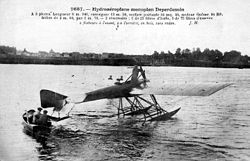 (Specifications varied considerably between different versions. The figures given below are not representative for the Gordon Bennett Trophy racers, which had much smaller wings and 140-160 hp 14-cylinder Gnôme Double Lambda engines)