Constitution of the German Empire

Constitution of the German Empire 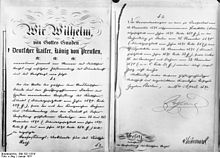 First and last page of the constitution of 1871, with the signature of Wilhelm, German Emperor and King of Prussia 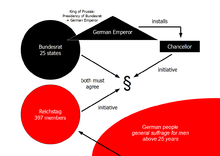 The text of the constitution was based on that of the Constitution of the North German Confederation, which had likewise been instigated by Otto von Bismarck.

According to the constitution, head of state was the King of Prussia as the president of the Bundesrat, the council of representatives of the German states. His title was German Emperor. The Emperor installed the Chancellor, the head of government. Laws were enacted by the Bundesrat and the Reichstag, the Imperial Diet elected by male Germans above the age of 25 years.

The most important changes to this constitution, of October 1918, gave the Reichstag the right to call for a demission of the Chancellor. These changes have led to the notion October constitution.

It has the same German title as its successor, the Weimar Constitution, also known as the "Constitution of the German Reich" or "Weimar constitution", that replaced it in 1919 creating the Weimar Republic.

The constitution was signed by the King of Prussia, acting in his capacity as President of the North German Confederation, the Kings of Bavaria, Saxony and Württemberg, and the Grand Dukes of Baden and Hesse. Hesse north of the river Main was already a member of the North German Confederation; its territory south of the river was now included as well. 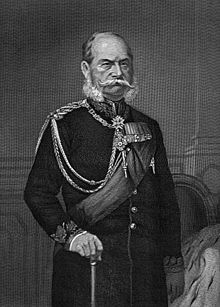 The King of Prussia was named in the constitution as the "President of the Confederation", and given the title of German Emperor (Deutscher Kaiser). Therefore, the emperorship was tied to the office of the King of Prussia instead of a personal union between the Empire and the Kingdom of Prussia. This meant that, unlike Wilhelm II had come to assume at the end of World War I, he could not abdicate merely as German Emperor while keeping the Prussian crown (unless he were to have agreed to renounce the entire constitution which would have been, in effect, the de jure dissolution of the Empire.

The emperor had the power to declare war (and make peace), represented the Empire abroad, conclude treaties and alliances, and accredit and receive ambassadors. In the case of a non-defensive war being declared, consent of the Bundesrat was required. Both chambers of parliament had to approve a treaty for it to be ratified. (all Article 11)

The emperor also appointed the chancellor.

Imperial laws were enacted, with the simple majority, by both the Reichstag (parliament) and the Bundesrat (Article 5). These laws took precedence over that of the individual states (Article 2).

Article 13 required the annual convocation of both bodies. The Bundesrat could be called together for the preparation of business without the Reichstag, but not the converse. 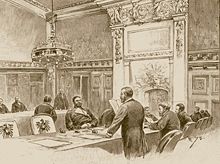 The chamber of the Bundesrat in the Reichstag building, 1894

The Bundesrat (Articles 6 & 7) was made up of representatives of the various states. In German constitutional law it is not considered a parliament chamber, although foreign commentators tend to do so. It can be translated to English as Federal Council.

Each state was allocated a specified number of votes; although a state could appoint as many delegates to the Bundesrat as it had votes, each state was only able to block-vote. Each state had a different number of representatives, with the larger and more powerful states having more. Voting had to be in person.

In the case of legislation only affecting certain states, only those states were allowed to vote.

The Bundesrat's presiding officer had a vote in the event of a tie-break.

A representative could not be a member at the same time of both chambers (Article 9), and they were given Imperial protection (Article 10).

Permanent committees of the Bundesrat

At least four states had to be represented on each committee, excluding the chairman. Each state was only allowed one vote.

On the committee for the army and fortifications, Bavaria had a permanent seat. All that committee's members were appointed by the Emperor; members of all the other committees were elected by the Bundesrat. 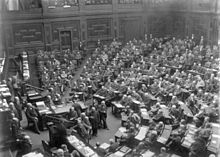 Membership of the parliament, the Reichstag or Imperial Diet, was by "universal suffrage" (this was interpreted to mean suffrage for all male citizens over 25). A secret ballot was guaranteed (Article 20).

Transitional arrangements set the total number of deputies at 382, with 48 for Bavaria, 17 for Württemberg, 14 for Baden, and 6 for Hesse south of the river Main (Article 20).

Bills would be laid before the Reichstag in the name of the Emperor, in accordance with a resolution of the Bundesrat, and would be advocated by members of the Bundesrat (or by special commissioners appointed by it)(Article 16).

Article 4 detailed the areas for which the Empire was responsible for, or was entitled to legislate on:

Decrees and ordinances of the Emperor required the counter-signature of the Chancellor to be valid (Article 17).

Formally, imperial officials were appointed and dismissed by the Emperor. They were required to take an oath of allegiance. Imperial officials appointed from one of the states were guaranteed the same rights as given them by their native state. (Article 18)

The constitution was amended on December 20, 1873 by the Lex Miquel-Lasker to make the entirety of civil law the responsibility of the Empire. However, it took some two decades before a national civil code was finally promulgated (as the Bürgerliches Gesetzbuch).