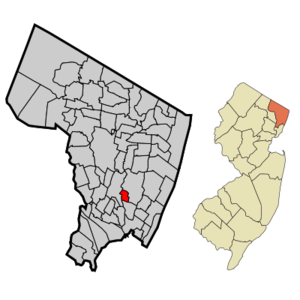 Bogota was formed on , , from portions of Ridgefield Township at the height of the "" phenomenon, based on the results of a referendum held that day.

The borough's name is pronounced "buh-GO-ta", unlike , capital city of , whose name is accented on the final syllable.

There were 2,874 households out of which 36.5% had children under the age of 18 living with them, 56.0% were married couples living together, 13.8% had a female householder with no husband present, and 26.0% were non-families. 21.9% of all households were made up of individuals and 8.1% had someone living alone who was 65 years of age or older. The average household size was 2.85 and the average family size was 3.38.

Bogota is governed under the Borough form of New Jersey municipal government. The government consists of a Mayor and a Borough Council comprising six council members, with all positions elected at large. A Mayor is elected directly by the voters to a four-year term of office. The Borough Council consists of six members elected to serve three-year terms on a staggered basis, with two seats coming up for election each year.

The Mayor is elected to serve a four-year term and may succeed that term by re-election. The Mayor is empowered as head of the municipal government to: Provide for the proper execution of local and State laws; Recommend to the Borough Council measures deemed in the best interest of the Borough; Nominate and, with the advice and consent of the Council, appoint most subordinate officers of the Borough; and Maintain peace and order. Although the Mayor presides over meeting of the Borough Council, the Mayor votes only in the case of a tie. State law also requires the Mayor to be a member of the Planning Board and Board of Trustees of the municipal Public Library.

The six Council members are elected at-large for terms of three years on a staggered basis, with two seats coming up for election each year. The Council exercises general legislative powers conferred upon it by State law to protect and promote the general welfare of the Borough. Among these are: The right to enact ordinances; Approve resolutions; Approve mayoral appointments; and Adopt the annual budget and determine tax levy. [ [http://www.bogota.nj.us/government/default.asp Bogota Municipal Government: How Does It Work?] , Borough of Bogota. Accessed , .]

Students in grades Kindergarten through 12 are educated in the . Schools in the district (with 2005-06 enrollment data from the . [ [http://nces.ed.gov/ccd/schoolsearch/school_list.asp?Search=1&DistrictID=3401920 Data for the Bogota Public Schools] , . Accessed , .] ) are [http://www.bogotaschools.com/bixby E. Roy Bixby School] with 334students in grades K - 6, [http://www.bogotaschools.com/steen Lillian M. Steen School] which serves 274 students in grades K - 6, and with an enrollment of 536 students on grades 7 through 12.

While no major highways travel through the borough, Interstate 80 is accessible at Exit 67 in Ridgefield Park, just south of Bogota, and Route 4 is accessible in Teaneck to the north in Teaneck. These highways provide access to the , the , the and other portions of the area's transportation network. Several bridges span the Hackensack River to Hackensack.

Several bus lines travel through Bogota between Hackensack, Jersey City, Paramus and . bus service is available to the in on the 155 and 168 routes; to the on the 182 route; and to other New Jersey communities served on the 83 (to Jersey City), 751 and 755 routes. [ [http://www.njtransit.com/sf/sf_servlet.srv?hdnPageAction=BusRoutesBergenCountyTo Routes by County: Bergen County] , . Accessed September 9, 2008.]

There is no passenger rail service, but the CSX freight line is on the edge of the borough.

The 2005 "Anytown, USA" focused on the 2003 mayoral race between Republican Steve Lonegan, Democrat Fred Pesce and independent Dave Musikant. The film was screened at the on , , where it won the award for Best Documentary. [ [http://sirkproductions.com/ Sirk Productions] , accessed , .]

*"History of Bergen County, New Jersey, 1630-1923;" by "Westervelt, Frances A. (Frances Augusta), 1858-1942."
*"Municipal Incorporations of the State of New Jersey (according to Counties)" prepared by the Division of Local Government, Department of the Treasury (New Jersey); , .