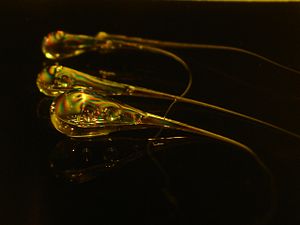 Prince Rupert's Drops (also known as Rupert's Balls or Dutch tears[1]) are a glass curiosity created by dripping hot molten glass into cold water. The glass cools into a tadpole-shaped droplet with a long, thin tail. The water rapidly cools the molten glass on the outside of the drop, while the inner portion of the drop remains significantly hotter. When the glass on the inside eventually cools, it contracts inside the already-solid outer part. This contraction sets up very large compressive stresses on the exterior, while the core of the drop is in a state of tensile stress. It can be said to be a kind of tempered glass.

The very high residual stress within the drop gives rise to unusual qualities, such as the ability to withstand a blow from a hammer on the bulbous end without breaking, while the drop will disintegrate explosively if the tail end is even slightly damaged.

When the tail end is damaged, the large amount of potential energy stored in the drop's crystalline or amorphous atomic structure is released, causing fractures to propagate through the material at very high speeds.

Recently an examination of the shattering of Prince Rupert's Drops by the use of extremely high speed video[2] has revealed that the "crack front" which is initiated at the tail end propagates in a disintegrating Drop within the tensile zone towards the drop's head at a very high speed (~ 1450–1900 m/s, or up to ~4,200 miles per hour, a number that in air would be Mach 5.5).

Because of the transparency of glass, the internal stress within these objects can be demonstrated by viewing them through polarizing filters.

The drops are reliably reported to have been made in Mecklenburg (North Germany) at least as early as 1625. However, it has been claimed that they were invented in Holland, hence a common name for them in the seventeenth century was larmes bataviques or lacrymae Batavicae. The secret of how to make them remained in the Mecklenburg area for some time, although the drops were spread across Europe from there, for sale as toys or entertainments.

It seems clear that Prince Rupert did not discover the drops, but played a role in their history by being the first to bring them to Britain, in 1660. He gave them to King Charles II, who in turn delivered them in 1661 to the Royal Society (which the King had created the previous year) for scientific study. Several early publications from the Royal Society give accounts of the drops and describe experiments performed. Among these publications was Micrographia of 1665 by Robert Hooke, who later would discover Hooke’s Law.[4] His publication laid out correctly most of what can be said about Prince Rupert’s Drops without a fuller understanding than existed at the time, of elasticity (to which Hooke himself later contributed so greatly) and of the failure of brittle materials from the propagation of cracks. A fuller understanding of crack propagation had to wait until the work of A. A. Griffith in 1920.[5]

Because of their use as a party piece, Prince Rupert’s Drops became widely known in the late seventeenth century — far more than today. It can be seen that educated people (or those in “society”) were expected to be familiar with them, from their use in the literature of the day. Samuel Butler used them as a metaphor in his poem Hudibras in 1663,[6] and Pepys refers to them in his diary.[7]

The drops were immortalized in a verse of the Ballad of Gresham College (1663):

And that which makes their Fame ring louder,
With much adoe they shew'd the King
To make glasse Buttons turn to powder,
If off the[m] their tayles you doe but wring.
How this was donne by soe small Force
Did cost the Colledg a Month's discourse.[8]

Peter Carey devotes a chapter to the drops in his 1988 novel, Oscar and Lucinda.