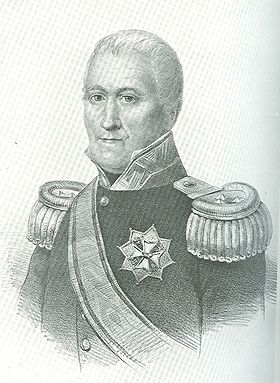 Corneli(u)s Rudolphus Theodorus, Baron Krayenhoff[1] (Nijmegen, 2 June 1758 - Nijmegen, 24 November 1840) was a physicist, artist, general, hydraulic engineer, cartographer and - against his will and for only a short time - Dutch Minister of War.

His father was a hydraulic engineer and soldier in Nijmegen, with brewing as a sideline. Krayenhoff was educated in Nijmegen, Arnhem and Harderwijk. In the latter city he met Herman Willem Daendels, later a fellow-revolutionary. He had been intended to study law, but began to study philosophy and medicine instead (1777–1783). He wrote his dissertations on the theory of the imagination and a medical survey of the dysentery epidemic that raged in Nijmegen in 1783. He established himself as a physician in Amsterdam, after he had declined an offer of a professorate in medicine at Franeker university. He was a member of the Concordia et Libertate genootschap and of Maatschappij tot Nut van 't Algemeen. In the Felix Meritis genootschap he presented physics experiments and lectured on art history, while taking lessons in painting. He refused a request to take charge of organizing military inundations around Amsterdam during the Patriot Revolt of 1785-7. This may have contributed to the fall of Amsterdam to the Prussians in 1787, when they intervened in favor of stadtholder William V.

Krayenhoff was an authority on electricity and lightning. The spire of the Grote or Martinikerk (a church in Doesburg) was, in 1782, the first building in the Netherlands to be equipped with a lightning conductor. He and Adriaan Paets van Troostwijk in 1787 won first prize for their article on electricity. In 1791 he became a member of the Hollandsche Maatschappij der Wetenschappen (a scientific genootschap, one of the predecessors of the Royal Netherlands Academy of Arts and Sciences).

Egbert van Drielst and Adriaan de Lelie: Krayenhoff in French uniform on his departure from Maarssen on Sunday morning, 18 January 1795

The French advanced rapidly after the Waal river froze over in late December, 1794. Soon important cities, like Nijmegen and Utrecht capitulated. The Patriot Revolutionary Committee (with Samuel Iperusz. Wiselius and Nicolaas van Staphorst) deemed it important to liberate an important city itself, without direct French aid, to support its claims to independent authority in the Netherlands. It therefore sent Krayenhoff to Amsterdam, in a French lieutenant's uniform, to organize another insurrection. On Sunday afternoon 18 January 1795 - at Daendels' instruction - he came to tell Amsterdam's burgomasters that they had better resign the next day. Intimidated by large crowds of Patriot sympathizers (who threatened President-Burgomaster Straalman's personal safety) and demoralized by the fact that the commander of the Amsterdam garrison, Col. Golowkin, refused to intervene, the city government handed over command of the garrison to Krayenhoff at midnight. The next morning, the Amsterdam Revolutionary Committee triumphantly rode to city hall, while exultant crowds planted a liberty tree on Dam Square.[3]

In 1796 he became head of Dutch fortifications and moved to Muiden. From 1798 he was involved in organising the new Rijkswaterstaat, after the establishment of the unitary state. He was involved in the campaign against the Anglo-Russian Invasion of Holland of 1799 as commander of the Batavian Engineers (see Battle of Castricum) and advised the army leadership. After the Convention of Alkmaar of October 18, 1799, in which the evacuation of the invasion troops was agreed, Krayenhoff, on behalf of the Batavian command inspected the fortifications which the British had promised to leave intact as part of the capitulation.[4]

Krayenhoff was meanwhile beginning his life's work : setting up a system of triangulation, so that the Netherlands could be mapped in detail.

Krayenhoff busied himself with determining the Amsterdam Level. King Louis Bonaparte (the ruler of the Kingdom of Holland after 1806) was very taken with him and gave him various positions. Krayenhoff was for ten months Minister of War and organized Amsterdam's defensive fortifications against a feared invasion by the king's brother Napoleon Bonaparte.[5] Krayenhoff in this context initiated the construction of the Stelling van Amsterdam, at this time called the Posten van Krayenhoff, or the Oude Stelling van Amsterdam. When Napoleon became aware of this, Krayenhoff had to be fired. However, in a later personal encounter after the annexation of the Netherlands to France in 1810, Napoleon still showed interest in him and gave him an appointment in Paris.[6] Krayenhoff got an attractive offer from Russia, but feared the tsar, for his two sons had been captured during the French invasion of Russia in 1812 and were still in captivity. His eldest son fought in the Battle of Waterloo against Napoleon, and was wounded.

However, Krayenhoff became increasingly disaffected with the French. As an illustration, Willem de Clercq mentions in his diary that Krayenhoff, during the Dutch insurrection against France in 1813, gave the order that, should there be a French attack, "...everybody should take up the cobblestones before his front door, carry them to his parlour, and greet the attacking French lovingly with a hail of stones" (aan iedereen om de stenen voor zijn deur op te nemen, dezelve op zijn voorkamer te transporteren en daarmee de aanvallende Fransen lieflijk met een steenregen te begroeten).[7] In 1813 he worked diligently for the Restoration and in 1815 he was made a baron by the new king.

In that same year, he took the initiative for the construction of the New Dutch Water Line, assisted by Jan Blanken. In 1818, Krayenhoff got into problems regarding the building of defence works in Charleroi. His youngest son, Johan Krayenhoff, was involved in the building of fort Batavia in Nijmegen. In 1826 king William I of the Netherlands honored Krayenhoff by renaming it after him. In 1825 he travelled on a frigate to Surinam and Curaçao.

Krayenhoff got into more problems in 1826 over alleged malversations committed during the construction work of fortifications in Ieper and Ostend, but was acquitted at a trial in 1830.

On 12 May 1823, Krayenhoff was appointed Knight Grand Cross in the Order of William for his contribution to the strengthening of the Netherlands' southern border. From 1826 on he left active service and wrote his memoirs.

Krayenhoff died at the age of 82 and was initially buried in the fortress at Nijmegen that was named after him (his headstone is still there). In 1916 he was reburied at Rustoord cemetery in Nijmegen.