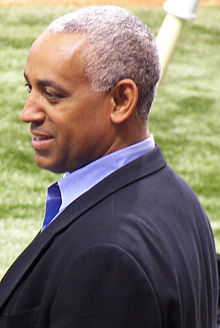 Born in the Dominican Republic, he moved to Elmhurst, in Queens, New York City at the age of eight and grew up in Corona.[1][2] Minaya starred as a baseball player at Newtown High School in Elmhurst.

Minaya was drafted by the Oakland Athletics in the 14th Round (342nd overall) of the 1978 Major League Baseball Draft. He had a short-lived career in the minor leagues as well as stints in leagues in both the Dominican Republic and Italy.

After injuries ended his playing career, Minaya joined the Texas Rangers' scouting team in 1985, where he helped in the signing of players such as Sammy Sosa and Juan González.

In the mid-1990s, Minaya left Texas and returned home to join the staff of the New York Mets, working his way to Assistant General Manager behind Steve Phillips and being partly responsible for that team's late-1990s success. Minaya became the first Hispanic to hold a general manager position in Major League Baseball when he left the Mets in early 2002 to accept the General Manager position with the Montréal Expos. He returned to the Mets as General Manager following the 2004 season.

Minaya and the Mets were featured in the Sports Illustrated cover story for the June 18, 2007 issue.[3] The article focused on Minaya's upbringing in the Dominican Republic and Queens, as well as his brief minor league playing career, his two years playing professional baseball in Tuscany, and time as an international scout in the Rangers' organization.

At the time of Minaya's arrival in Montreal, the Expos were jointly owned by the 29 other teams of Major League Baseball. This unusual ownership arrangement was reached after a period of contraction rumors and the purchase of the Florida Marlins by former Expos owner Jeffrey Loria. With the fanbase rapidly declining and speculation that the team would be relocated, Minaya was forced to work with limited financial resources. Despite these limitations, Minaya was aggressive in his attempt to make the Expos a contender. On June 27, 2002, he traded Cliff Lee (future Cy Young winner and 2 time All-Star), Grady Sizemore (future 3 time All-Star, 2 time Gold Glove winner, and Silver Slugger), Brandon Phillips (future All-Star and two time Gold Glove winner) and Lee Stevens to the Cleveland Indians for Bartolo Colón. On July 11, he acquired Cliff Floyd from the Marlins only to deal him to the Boston Red Sox for Sun-Woo Kim and a minor leaguer by the end of the month. The 2002 Expos ended up with an 83-79 record and second place in the National League East.

After another 83-79 record and the departure of star Vladimir Guerrero in 2003, the Expos went 67-95 in 2004 amid reports that their future in Montréal would soon end. When it was announced that the Expos would relocate to Washington, DC for the 2005 season, Minaya learned that with the move would come a new front office and coaching position.

The half-season rental of Bartolo Colón made by Minaya made as General Manager of the Expos is part of arguably one of the worst trades in history, as it included the 2008 AL Cy Young Award winner in Lee and future All-Stars Brandon Phillips and Grady Sizemore. Minaya also dealt away a number of other young players that went on to enjoy significant success upon reaching the major league level. These include:

Return to the Mets

After the Mets continued to struggle at the conclusion of the 2004 season, Mets owner Fred Wilpon asked Minaya to become the team's general manager. In Minaya's first offseason he made two significant free agent signings, adding pitcher Pedro Martínez and outfielder Carlos Beltran. Signing Martinez helped raise the awareness of the Mets in Latin America, leading Minaya to remark that Martinez was "a guy that makes the brand."[4] Under new manager Willie Randolph, the Mets improved from 71 wins in 2004 to 83 wins in 2005, staying in the hunt for the postseason until the last week of the season.

The benefits of Minaya's work became immediately apparent in 2006 as the Mets won the National League East by 12 games, finishing first with a National-League-best and Major League-tied 97 wins. During the season, Minaya fortified the team by making additional trades, acquiring Orlando Hernández (for Jorge Julio) and Óliver Pérez and Roberto Hernandez (for Xavier Nady) and trading away second baseman Kazuo Matsui.

Not all of Minaya's transactions worked out in the Mets' favor, however. The Mets signed Moisés Alou to multiple lucrative contracts, but Alou was plagued with injuries during his Mets career. Minaya also traded away several young pitchers that many fans believe could have helped the Mets avert their historic breakdown at the end of the 2007 season. In November 2006, Minaya sent Heath Bell and Royce Ring to the Padres for Ben Johnson and Jon Adkins. A few days later, he sent hard-throwing relievers Henry Owens and Matt Lindstrom to the Florida Marlins for lefties Jason Vargas and Adam Bostick. The following month, he traded starting pitcher Brian Bannister (son of former major league pitcher Floyd Bannister) to the Kansas City Royals for a live bullpen arm in Ambiorix Burgos. The young pitchers dealt away by Minaya, most notably Bell and Lindstrom, thrived with their new teams, overall the Mets netted little on those deals.

Minaya's biggest acquisition came on January 29, 2008 when he reached a tentative deal with the Minnesota Twins to send Carlos Gómez, Philip Humber, Kevin Mulvey, and Deolis Guerra to the Twins for ace pitcher Johan Santana. The trade became official after Santana was signed to a contract extension and passed a physical. As of June 2, 2009, these 4 players have little to no effect on the Twins organization except for Gomez, the lone player in the majors of the 4. The next offseason Omar needed to address the bullpen. On December 9, Minaya locked up closer Francisco Rodríguez to a three year deal. Rodriguez is coming off a major league record of 62 saves in the 2008 season. Three days later, Minaya acquired JJ Putz from the Mariners in a three team deal. On January 5, 2010, Minaya signed outfielder Jason Bay to a four year deal. Ironically, it was Minaya as Expos general manager who traded Bay to the Mets in 2002.

He was fired from the New York Mets organization on October 4, 2010, along with Manager Jerry Manuel.[5] Since his firing, Minaya has been offered a position as special assistant to Arizona Diamondbacks GM Kevin Towers. He has also spoken with current Mets GM Sandy Alderson about taking a position in the team's front office.[6]

Omar Minaya was subject to intense scrutiny and criticism from many in Major League Baseball and by the New York City media for his handling of the firing of Willie Randolph as the Mets manager. Many members of the media and fans criticized the timing of the decision, a day into a west coast road trip, and some referred to the late night episode as the Mets' "Midnight Massacre." He fired Randolph in Randolph's hotel room in California after Randolph finished managing the first game of the Mets series with the Los Angeles Angels of Anaheim, a game which they won, 9-6. Minaya also fired pitching coach Rick Peterson and first base coach Tom Nieto. Randolph was removed from his position with no media present and the decision came to light through a press release from Minaya at 3:12am EST (12:12am PDT); as such, many of the Mets team members were unaware that this had transpired and, upon being informed (not by Mets management, but by various team reporters and commentators) expressed shock and mild disbelief. Randolph's job was in question for the two to three weeks prior to the decision being made, and the uncertainty of Randolph's job has been more at the forefront of the questions surrounding the team than the actual baseball they've been playing. Jerry Manuel, Randolph's bench coach, was appointed the interim manager of the Mets. Coaches Ken Oberkfell (new first base coach), Dan Warthen (new pitching coach), and Luis Aguayo (new third base coach) also joined the team after this decision (Sandy Alomar, Sr. became Manuel's bench coach). During his 5pm EST press conference from California, Minaya confirmed that Manuel would remain as the Mets manager during the remainder of the 2008 season. On October 3, 2008, it was reported that Manuel had agreed to a two-year deal to remain Mets manager, with a club option for a third year.

On July 27, 2009, the Mets organization issued a statement announcing the firing of Vice President of Development Tony Bernazard by Minaya saying, in part, "I spoke with Tony [Bernazard] this morning and informed him of my decision to terminate his employment with the Mets," confirming an earlier report.[7] At the press conference announcing the firing, Minaya angrily challenged the accuracy of past news reports, claiming that New York Daily News reporter Adam Rubin, who initially broke the story about Bernazard challenging Binghamton Mets players to a fight, was angling for a position in the Mets organization.[8] This led to a heated exchange of words between the two, with Rubin calling Minaya "despicable." Shortly after the press conference, Minaya said that he stood by his comments about Rubin but acknowledged that it "was not the proper forum to raise those issues."[9] Two days later, Minaya personally apologized to Rubin for his remarks.[10]

On January 6, 2009, former President George W. Bush appointed Mets GM Omar Minaya a position on his Council on Physical Fitness and Sports. Minaya's term in this will last for 16 months. As stated by mlb.com writer Anthony DiComo, "the council serves as a catalyst to promote health and fitness through participation in physical activity and sports." 17 others have joined this committee, some of which include former New York football Giants player Jason Sehorn and Olympic skater Michelle Kwan. Bush has created this committee to encourage American citizens to be healthy, and be active.