Breaking Benjamin is an American rock band from Wilkes-Barre, Pennsylvania, consisting of Benjamin Burnley and Chad Szeliga. The band has released four studio albums to date and a greatest hits album that was released on August 16, 2011. The group initially went on indefinite hiatus due to frontman Benjamin Burnley's recurring illnesses and inability to tour in mid-2010. Further complications arose in August 2011, when it was revealed that members Mark Klepaski and Aaron Fink had been fired from the band.

Breaking Benjamin has sold over 5 million albums in the US alone.[1]

Before Breaking Benjamin, Ben Burnley was a solo performer. He later came up with the band's name, "Breaking Benjamin," after doing a performance of a Nirvana cover. At the end of the performance, Ben knocked over and cracked a microphone he had borrowed. The owner of the microphone walked onto the stage and said, "I'd like to thank Benjamin for breaking my fucking microphone."[citation needed]

In 1998, Burnley and former lead guitarist Aaron Fink, got together (along with Nick Hoover and Chris Lightcap) and started the band Breaking Benjamin. Eventually Burnley wanted to try something different and went out to California to try some new material. Ben Burnley soon moved back to Pennsylvania and started a band called Plan 9 with drummer Jeremy Hummel. Originally the band was a 3-piece. The lineup consisted of Burnley on vocals and guitar, Hummel on drums, and Jason Davoli on bass.[2] Plan 9 would occasionally open for Lifer at home shows. During one show, Burnley said “Thank you, we’re Breaking Benjamin”, and thus reclaiming the name from 1998.[2]

Breaking Benjamin signed to Hollywood Records in early 2002 after the success of an independently-released, self-titled EP, which sold all 2,000 copies that were manufactured. The band then released their full-length, major-label debut, Saturate, on August 27, 2002. The album peaked at number 2 on the Billboard Top Heatseekers Chart and at 136 on the Billboard Top 200.[citation needed]

The album's first single, "Polyamorous", received a fair amount of radio play, although it failed to reach mainstream audiences. A video was released in three different versions for "Polyamorous": one that had all live-action footage, and one that had footage of the video game Run Like Hell. The third was a variation of the non-live action video, but instead of scenes from Run Like Hell, it has scenes of people in flirtatious acts. This song was featured on the game Smackdown vs. Raw and also featured on WWE Day of Reckoning.

The second single from Saturate was "Skin", which fared even worse than "Polyamorous". Burnley has been known to state his disdain for the song during live performances and has the crowd sing the words as the band plays. This is due to Hollywood Records choosing it as the main single instead of the band's choice, "Medicate".

"Wish I May" is a song played during the closing credits of the 2003 movie Wrong Turn.

Breaking Benjamin released their second album, We Are Not Alone, on June 29, 2004. The album featured the lead off single "So Cold", which reached number two on the United States Billboard Mainstream Rock chart. The band had two music videos made for "So Cold" one of which was a promotional video for the movie Hellboy. "So Cold" spent 37 weeks in the top 20 of the Billboard charts (as of February 3, 2005).

Also released as singles from the album were "Sooner or Later" and a re-recorded, full band version of "Rain", which was featured on later pressings of the album. A music video was made for "Sooner or Later" as it got a fair amount of radio play reaching number two on the Mainstream Rock Charts. The track was also performed live on "The Tonight Show with Jay Leno".[3]

The tracks "Rain", "Forget It" and "Follow" were all co-written by the guitarist and vocalist of The Smashing Pumpkins, Billy Corgan. Ben Burnley and Billy Corgan's collaboration took place for six days in December. Burnley admitted he was, at first, nervous to work with Corgan, but later felt comfortable and called the experience one of the highlights of his career.[4]

Jeremy Hummel was unable to play with the band from August until September 2004 due to the birth of his child, and was granted leave of absence for that amount of time, and the band selected Kevin Soffera to fill in for Hummel during his absence. Soffera appears on the recordings of The Conan O’Brien show and The Carson Daly Show as well as on the So Cold EP performing the songs Away and Breakdown.[5] Upon returning to Breaking Benjamin in September 2004, drummer and founding member Jeremy Hummel was fired. Subsequently, on September 28, 2005, Hummel filed a federal lawsuit against the remaining members of Breaking Benjamin, as well as its management, claiming he was not paid for songs he helped write. Hummel's lawsuit asked for more than $8 million in damages. An article was released October 25, 2006, stating that Hummel does not receive any payments from the making of We Are Not Alone in which he co-authored.[6] After Kevin was finished with his duties as a fill-in for Jeremy, the band brought Ben "B.C." Vaught into the band to fill in as their drummer. B.C. was with the band until the band hired Chad Szeliga in early 2005.[7] The track "Firefly" was featured in the "WWE Day of Reckoning" video game, released November 2004.

The single "Blow Me Away" was originally written for and featured in the hit game: Halo 2 which was released in November 2004, and would later be on the game's soundtrack Halo 2 Original Soundtrack Volume 1. The song also apprears on the So Cold EP, released on November 23, 2004.

Breaking Benjamin released Phobia on August 8, 2006, leading off the album with the single "The Diary of Jane", which made it to #4 on the U.S. Modern Rock Charts.

On February 11, 2007, HDNet premiered a one-hour show of the Breaking Benjamin concert in Bethlehem, Pennsylvania at Stabler Arena. This is also the concert that was included on the Phobia re-release DVD in April 2007, advertised as "The Homecoming". The band obtained their first number 1 single on the Billboard Mainstream Rock Tracks with "Breath". Footage of the band's live Stabler Arena performance of "Breath" comprises the song's music video. On April 17, 2007, Breaking Benjamin re-released the album Phobia. The album featured a DVD with about an hour of their Stabler Arena concert footage. They completed a co-headlining tour in the United States with Three Days Grace and had Red and Puddle of Mudd as openers. The album re-entered the Billboard 100 at number 38 on May 5, 2007 with its reissue.

On October 23, 2007, Breaking Benjamin released all of their music videos to date on iTunes. The set was titled, "Nightmares".[9]

On May 21, 2009 Phobia reached RIAA Platinum status, selling over one million units in the U.S.[8] 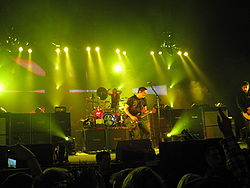 David Bendeth[10] who produced the band's last two studio efforts, We Are Not Alone and Phobia, produced Breaking Benjamin's 4th studio album, Dear Agony. On their MySpace blog, Breaking Benjamin stated, "We are busy crafting the new material and have several songs ready for the Bendeth production treatment." Jasen Rauch, guitarist for Red, co-wrote four of the new tracks including "I Will Not Bow", "Hopeless", "Lights Out" and "Without You".[11] He stated that he was getting no deadlines or pressure from the label on this album so he was taking his time.[12]

The band co-headlined a January–February 2010 tour of the US with Three Days Grace and Flyleaf.[15]

During the summer Burnley played two solo acoustic shows with friend Aaron Bruch who is the bass player of Chad Szeliga's side project OurAfter.[16] This was the first time "Forget It" and "Follow" were actually performed live. In addition, Burnley covered Tool, Queen, Michael Jackson, Deftones, Alice in Chains, and Cyndi Lauper.[17]

In the summer of 2010, the band went on an indefinite hiatus due to Burnley's recurring illnesses. Guitarist, Fink and bassist, Klepaski rejoined their previous band Lifer and Szeliga started touring with his side project band OurAfter, And has joined the Black Label Society.

On June 7, 2011, a remixed version of "Blow Me Away" featuring Valora was released.[18] On June 30, 2011, Rock Access posted the tracklist for the greatest hits album, to be called Shallow Bay: The Best of Breaking Benjamin, along with the tracklist for the standard and deluxe editions.[19] It was released on August 16, 2011 and was made available as a standard edition single disc and a deluxe edition two disc set featuring b-sides and rarities. The standard edition included the remix of "Blow Me Away".[20]

On August 2, 2011, an article was released regarding a dispute over the new version of "Blow Me Away". The dispute erupted during the time in May when Burnley fired bandmates Fink and Klepaski. Burnley detailed his side of the dispute in a June court filing, saying Fink and Klepaski made unilateral and unauthorized decisions on behalf of the band, including giving permission in May for the new recording and remix of "Blow Me Away" without his consent.[21] Burnley seeks at least $250,000 and the exclusive right to the "Breaking Benjamin" name.[22][23] Billboard reports that Burnley plans on continuing the band's work as soon as his lawsuit is over.[24]