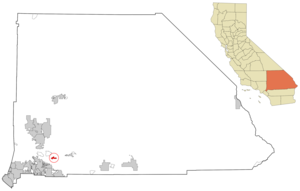 There were 1,903 households out of which 35.4% had children under the age of 18 living with them, 56.2% were married couples living together, 10.5% had a female householder with no husband present, and 28.2% were non-families. 21.5% of all households were made up of individuals and 5.3% had someone living alone who was 65 years of age or older. The average household size was 2.61 and the average family size was 3.04.

Running Springs is a mountain community in the . It is an in the . Situated at the junction of SR-18 and SR-330, it is a major gateway to the mountain communities of Lake Arrowhead, , , and . It lies some 16 miles (24 kilometres) northeast of the city of , up SR-330, at an elevation of 6080 feet. While there is no primary industry in Running Springs, there are service industries geared to the tourist market, as the San Bernardino National Forest is a highly popular year-round tourist destination. Also, taking advantage of the forested setting, the area is home to multiple s, including Pali Overnight Adventures, which caters to upper class families. Several prominent celebrities children attend Pali, including the children of Hugh Hefner, Bruce Springsteen, and others.

Additionally, Running Springs, together with surrounding communities, form a for commuters who are employed in San Bernardino and points beyond who are willing to tolerate the notorious in order to live above the city's considerable smog and pollution.

Running Springs is a member community of the , an inhabited stretch of the and wholly contained in the . The Rim (as it is locally known) extends from to , a distance of some 30 miles (50 kilometres). Locals refer to most non-residents as "Flatlanders", a term describing people from down the hill. "Flatlanders" is also used to describe drivers unfamiliar with the skills, equipment or laws governing driving on mountain roads.