Important segments of low coasts are receding, losing sand and reducing the beaches' dimensions. This loss could occur very rapidly. From more to less natural causes (degree of anthropization downwards): 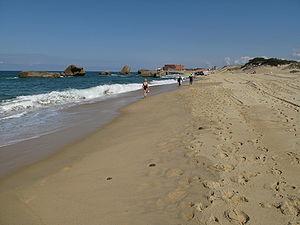 Blockhauss of Capbreton, south-west of France

Some of the blockhauss of the Atlantic Wall, built by the German soldiers during the Second World War at the top of the dunes are now underwater 2/3 of the times. It shows 200 meters of recession of the beach in 65 years.

The coast recession near Sète is related with coastal drift sand supply interruption due to growth of the Rhone delta, which (like most deltas) is becoming independent of the rest of the coast. The present lido shoreline is 210 meters away from the Roman lido.

California's beaches and other shoreline features change according to the availability of beach sand, the wave and current energy impinging on the coast, and other physical processes that affect the movement of sand. A constant supply of sand is necessary for beaches to form and be maintained along this shoreline. Many human activities, including dam construction and river channelization, have reduced the supply of sand that reaches the ocean. This, in turn, has prevented beaches from being replenished and has thus created greater vulnerability for shorelines that have always been subject to varying levels of erosion. There are few practical solutions to improving sand supply from inland sources, so management of shoreline erosion will likely continue to focus at the land/sea interface along the California coastline.

Construction of breakwaters, jetties, or groyne fields to protect harbor entrances, maintain beaches, or protect coastal structures have both helped and harmed the movement of sand along the shoreline. Protective armoring formations trap sand and allow beaches to expand up-coast from the device, but can interrupt the flow of sand to beaches located down-coast.

The North Portuguese coast and its beaches were fed by large Iberian rivers. The massive building of dams in the Douro River basin has cut the sediment supply to the Aveiro coast, resulting in its recession. Hard protective works have been done all along. 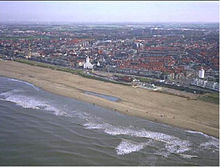 The Dutch coast consists of sandy, multi-barred beaches and can be characterised as a wave-dominated coast. Approximately 290 km of the coast consists of dunes and 60 km is protected by structures such as dikes and dams. With the melting of the ice at the end of the last ice age the coastline shifted eastward until about 5000 years ago the present position of the Dutch coastline was reached.

As the sea level rise stagnated, the sand supply decreased and the formation of the beach ridges stopped, after which when the sea broke through the lines of dunes during storms, men started to defend the land by building primitive dikes and walls. The dunes, together with the beach and the shoreline, offer a natural, sandy defence to the sea. About 30% of the Netherlands lies below sea level.

Structural erosion is due to sea level rise relative to the land and, in some spots, it is caused by harbour dams. The Dutch coast looked at as a single unit shows erosive behaviour. Approximately 12 million m3 of sand is transferred annually from the North Sea to the Wadden Sea as a result of relative rising sea level and coastal erosion.