Martin Taylor (born 9 November 1979 in Ashington, Northumberland) is an English footballer who plays as a defender for Watford in the Football League Championship.

Taylor began his career with Blackburn Rovers, for whom he made more than 100 appearances, and also spent time on loan at Darlington and Stockport County. While a Blackburn player, he was capped once for the England under-21 team and played on the winning side in the 2002 Football League Cup Final. Taylor moved to Birmingham City in 2004, where he spent six seasons, and played for Norwich City on loan. He was involved in an incident in 2008 in which Arsenal player Eduardo da Silva suffered a badly-broken leg. Unable to force his way into Birmingham's first team after their return to the Premier League, he joined Watford in January 2010.

Taylor joined Blackburn Rovers as a schoolboy at the age of 17, signing his first full contract at the start of the 1997–98 season.

Loan spells at Darlington and Stockport served to improve his self-belief,[1] and in May 2001 he won his first and only cap for the England U-21 side, as a half-time substitute for John Terry in a 3–0 friendly win against Mexico U-21. Though part of the squad for the 2002 European Under-21 Championships, replacing the injured Ledley King, he made no further appearances for the side.

Also in 2002, he played throughout Blackburn's League Cup campaign, culminating in a 2–1 victory over Tottenham Hotspur at the Millennium Stadium.

Blackburn manager Graeme Souness felt that Taylor had enough ability to reach the top, but had for some time believed that without adopting a more aggressive physical approach – one which fitted his 6 ft 4 in (1.93 m) frame, which caused his teammates to nickname him "Tiny" – he would not fulfil his potential.[2] He had initially been viewed as a potential replacement for defenders Henning Berg and Craig Short, but, as Berg left the side, instead of giving Taylor his chance to play, Souness signed Lorenzo Amoruso, and when he was injured, took Markus Babbel on loan.

Though reluctant to sell, Souness needed to generate transfer funds,[3] so in January 2004, Blackburn proceeded to accept a £1.25 million bid from Birmingham City.

On 2 February 2004 Taylor left Blackburn for Birmingham City, signing a contract due to end in 2007. Former Blackburn teammates David Dunn[4] and Damien Johnson[5] highlighted Taylor's footballing ability and comfort on the ball. Rob Kelly, then head of youth coaching at Blackburn, while complimentary about his reading of the game and ability with both feet, felt that working with Birmingham manager Steve Bruce, a former top-class centre-half, in new surroundings might help bring out his unfulfilled potential,[6] an assessment with which Taylor himself agreed.[7]

He made his Birmingham debut in a 3–0 victory against Everton, and in his next game, a 3–1 victory against Middlesbrough, he scored his first league goal for the club. Unable to dislodge the established central defensive partnership of Matthew Upson and Kenny Cunningham, he played regularly for the remainder of the season, but mainly in his less favoured position of right back.[7]

When Bruce brought Taylor to Birmingham he mentioned his admiration for the player's ability to play in any defensive position;[8] this versatility ideally suited him to a backup role in the event of injury to any of the first choice defenders. In the following season, the form and fitness of Upson and Cunningham, together with the arrival of Dutch international fullback Mario Melchiot from Chelsea, considerably restricted Taylor's appearances. In the second half of the 2005–06 season he had a long run in the side due to Upson's ankle injury, a run which coincided with some of Birmingham's better performances.[9]

The departure of Cunningham and Melchiot following Birmingham's relegation from the Premiership, with Upson still injured long-term, provided an opportunity for Taylor to establish his first-team place alongside newly-arrived Bruno N'Gotty. But Bruce also recruited Tunisian international Radhi Jaïdi, and preferred the more robust physical approach of Olivier Tébily while Jaïdi built up match fitness.[10] However N'Gotty's suspension proved the catalyst for an upturn in fortunes for Taylor. He was named captain after Damien Johnson suffered a broken jaw, and his rapport with fellow centre-back Jaïdi helped Birmingham to maintain a strong position in the Championship in the 2006–07 season. In recognition of his value to the club, in April 2007 he signed a new three-year contract with an option for a further two years.[11]

However, he was not first choice with Birmingham back in the Premier League, and did not play in a single league game in the first 2 months of the season. On 1 November 2007, he became new Norwich City manager Glenn Roeder's first signing, joining on a month's loan, due to end on 8 December 2007.[12] In his debut game for Norwich against Ipswich Town on 4 November 2007, Taylor played a large role in his side's first goal, as his header was deflected in off Ipswich defender Owen Garvan. Garvan was eventually credited with the own-goal. Taylor went on to score with a diving header against Blackpool[13] and added considerable solidity at the back for Norwich. Though Norwich hoped to extend the loan, this was not possible so Taylor returned to Birmingham at the end of the initial month.[14]

Following Alex McLeish's arrival as Birmingham manager, Taylor was told that he was surplus to requirements; the club accepted an offer from QPR, reported at £1.25 million, but the player rejected it.[15] However, injury to Rafael Schmitz, Jaïdi's absence on international duty and McLeish's failure to sign any of his defensive targets gave Taylor a first league start of the season in a 1–1 draw with Derby County in January 2008.[16] He kept his place for the next match despite the availability of Schmitz and Jaïdi, and his impressive form left him in McLeish's plans for the remainder of the season.[17]

On 23 February 2008, in the third minute of Birmingham's home match against Arsenal, Taylor committed a foul on Croatian international striker Eduardo da Silva as a result of which Eduardo suffered a compound fracture to his left fibula and an open dislocation of his left ankle. He received treatment on the field for seven minutes before undergoing surgery at a local hospital, and was transferred to a London hospital the following day.[18][19] The injury was so disturbing that Sky Sports, who were broadcasting the game live, decided not to show replays of the incident.[20] Taylor was sent off for the offence.[18]

In his post-match interview, Arsenal manager Arsène Wenger called for a life ban for Taylor,[18] but retracted his remarks later that day, admitting they had been excessive and made in the heat of the moment.[21] Shortly after the match, Birmingham City issued a statement asserting Taylor's lack of malicious intent and his distress at the injury, and sending their best wishes to Eduardo.[18] While Croatia captain Niko Kovač referred to the "brutality" of the incident[22] and death threats appeared on the internet,[23] Birmingham manager Alex McLeish and Arsenal striker Nicklas Bendtner, a former teammate of Taylor's, insisted that he was not a malicious player,[18][24] and former manager Steve Bruce questioned whether Taylor even deserved a booking.[18]

At president Sepp Blatter's personal request, FIFA's disciplinary chairman reviewed the matter, suggesting that the Football Association increase Taylor's punishment from the standard three-match ban; they refused to do so as there was no suggestion of intent.[25] 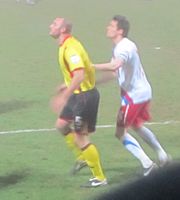 Taylor joined Watford of the Football League Championship on a free transfer on 29 January 2010. He signed a two-and-a-half-year contract.[26]

Taylor made his Watford debut on 2 February 2010, playing the full 90 minutes against Sheffield United at Vicarage Road.[27] Watford won the match 3–0, with Taylor's commanding display helping towards their first win whilst keeping a clean sheet for over two months. He scored his first goal for Watford in a 2–0 win over Bristol City on 9 February 2010.[28]

Following the departure of USA defender Jay DeMerit in June 2010,[29] Taylor and Adrian Mariappa were Watford manager Malky Mackay's preferred central defensive partnership for the 2010–11 season.[30] Despite struggling with injury towards the end of the season, Taylor managed to start all 46 of Watford's league games.[31] He also played a further three games in other competitions and scored six league goals.[32] Taylor was noted for his consistency during the season,[33] and finished 2nd in the voting for Watford F.C. Player of the Season behind Championship top-scorer Danny Graham.[34]