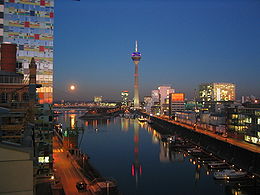 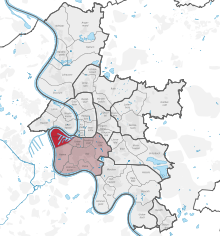 map of Düsseldorf, showing Hafen (in red) within District 3 (in pink)

Düsseldorf-Hafen means the harbour of Düsseldorf. More than that, Hafen is the name of the Düsseldorf district in which the habour is located.

The borough covers 3.85 km2, but there were only 212 inhabitants in the year 2000. With 55 inhabitants per km², this is the thinnest density of population in Düsseldorf.

For decades the harbour has been an area of workers, industry and trade. But after the Mannesmann company had discontinued its tube production in Düsseldorf, parts of the central harbour lost their reason for being (another harbour is in Düsseldorf-Reisholz). As a result the eastern part of the harbour started to be redeveloped.

Mainly third sector businesses were attracted to move to the Hafen: media companies, but also fashion and design offices. One of the first new residents to the so-called Media Harbour was Westdeutscher Rundfunk with its current affairs TV and radio studios. There is also Düsseldorf's local radio station, Antenne Düsseldorf, in the harbour. CNN used to have an office there. One of the largest cinemas of Düsseldorf is in the Hafen. The Landtag (State parliament) of North Rhine-Westphalia and the Rheinturm are situated right next to the harbour.

The Hafen district itself contains some spectacular post-modern architecture, most famously three twisted constructions by Frank Gehry. Other than that there are many restaurants, bars, and a few clubs, which make the Hafen a prominent lifestyle district. But one of its main attractions, the beach bar "Monkey's Island", had to close for the sake of one further newly planned upscale hotel.

The western part of the harbour is still industrially used, but there are plans for further redevelopment with the construction of high end apartment buildings.

This article is based on a translation of an article from the German Wikipedia.