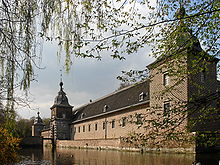 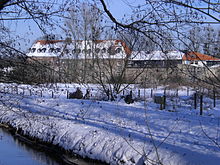 Angermund is an urban borough of Düsseldorf. Angermund is the northernmost part of Düsseldorf, neighbouring to Kalkum, Kaiserswerth and Duisburg. Having the second largest income in Düsseldorf, it provides a home to many corporate managers and foreign, mainly American, British and Dutch employees.

The name comes from the rivulet Anger, flowing into the river Rhine near Angermund. Angermund was written mentioned first time in 960 A.C.. The Castle Angermund was built in the 14th century A.C.. Angermund became a part of Düsseldorf in 1975.

The Castle Heltorf and its park are well-known in that region with its rhodedrendron plants. The old Castle Angermund from the 14. century is the other sight of angermund.

There is one S Bahn line (S1) connecting Düsseldorf-Angermund station southbound with Düsseldorf Airport and Düsseldorf Hbf as well as with Duisburg Hbf and the Ruhrgebiet, northbound. In addition to the railway service, there are two bus lines (728, 751) connecting Angermund with Ratingen Hösel and Düsseldorf Kaiserswerth. Two Autobahns are accessible via Duisburg Rahm and Ratingen Lintorf as well as a southbound highway going straight downtown. Subway service is accessible via Düsseldorf-Kaiserswerth and the airport railway station is one S Bahn stop south of Angermund.