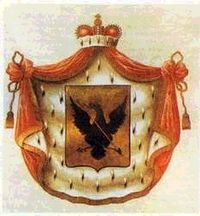 Coat of arms of the Gorchakov family

Gorchakov, or Gortchakoff (Russian: Горчако́в), is a Russian princely family of Rurikid stock, descended from the Rurikid sovereigns of Peremyshl, Russia.

The family first achieved prominence during the reign of Catherine II. Prince Aleksey Ivanovich (1769–1817) served with distinction under his uncle Suvorov in the Turkish Wars, and took part as a general officer in the Italian and Swiss operations of 1799, and in the war against Napoleon in Poland in 1806–1807 (Battle of Heilsberg). He succeeded Barclay de Tolly as the Minister of War in 1813. His brother Andrei Ivanovich Gorchakov (1776–1855) was a general in the Russian army who took a conspicuous part in the final campaigns against Napoleon. Their cousin Princess Pelageya Nikolayevna Gorchakov (1762–1838) was fictionalized by her grandson Leo Tolstoy in War and Peace.

Prince Peter Dmitrievich Gorchakov (1790–1868) served under Mikhail Kamensky and Mikhail Kutuzov in the campaign against Turkey, and afterwards against France in 1813–1814. In 1820 he suppressed an insurrection in the Caucasus, for which service he was raised to the rank of major-general. In 1828–1829 he fought under Prince Peter von Wittgenstein against the Turks, won an action at Aidos, and signed the treaty of peace at Adrianople. In 1839 he was made governor of Eastern Siberia, and in 1851 retired into private life.

When the Crimean War broke out he offered his services to the emperor Nicholas, by whom he was appointed general of the VI army corps in the Crimea. He commanded the corps in the battles of Alma and Inkerman. He retired in 1855 and died at Moscow, on March 18, 1868.

Prince Mikhail Dmitrievich (1795–1861), brother of the last named, was appointed commander-in-chief of the Russian troops which occupied Moldavia and Wallachia after the outbreak of the Crimean War. In 1854 he crossed the Danube and besieged Silistria, but was superseded in April by Prince Ivan Paskevich, who, however, resigned on June 8, when Gorchakov resumed the command.

In 1855 Gorchakov was appointed commander-in-chief of the Russian forces in the Crimea in place of the disgraced Prince Menshikov. Gorchakov's defence of Sevastopol, and final retreat to the northern part of the town, which he continued to defend till peace was signed in Paris, were conducted with lack of energy. In 1856 he was appointed governor-general of Poland in succession to Prince Paskevich. He died at Warsaw on May 30, 1861, and was buried, in accordance with his own wish, at Sevastopol.

Prince Alexander Mikhailovich Gorchakov (1798–1883) served as Chancellor of the Russian Empire during the entire reign of Alexander II. He was educated at the Tsarskoye Selo Lyceum, where he had the poet Alexander Pushkin as a school-fellow. In 1820-22 he accompanied Foreign Minister Karl Nesselrode to the Holy Alliance congresses at Troppau, Laibach, and Vienna.

Gorchakov was appointed Foreign Minister when the Crimean War was drawing to a close and represented the Tsar at the Paris Congress of 1856. His main objective was to restore Russia's international prestige after the bitter defeat. At first he steered the country towards an alliance with Napoleon III, but, rebuffed by the latter's support of the January Uprising, joined his archrival Otto von Bismarck in setting up the League of the Three Emperors. Following France's defeat in the Franco-Prussian War, Gorchakov succeeded in his long-term goal or revising the key clauses of the Paris Treaty, especially those containing Russia's interests in the Black Sea.

The aged chancellor was so disgusted by the modification of the Treaty of San Stefano at the Berlin Congress of 1878 that he laid down all his offices and settled into retirement. He died several years later.