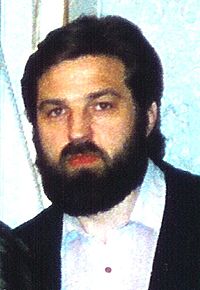 Nikolai Sergeevich Korndorf (Russian: Николáй Сергéевич Корндóрф, January 23, 1947 Moscow, USSR – May 30 , 2001 Vancouver, Canada) was a Russian and Canadian (from 1991) composer and conductor. He was prolific both in Moscow, Russia and in Vancouver, Canada.

He studied composition with Sergei Balasanyan at the Moscow Conservatory (1965–1970). During these years wrote a one act opera A tale on… (Russian: Сказание про... – Skazanie pro…) after Semyon Kirsanov. Korndorf completed post-graduate studies in 1973 with his opera Feast in the Time of Plague after Alexander Pushkin. He studied conducting with Leo Ginsburg from 1967 to 1979 and taught composition and orchestration at the Conservatory from 1972 to 1991. He became a member of the Union of Composers in 1973 and later a member of the Moscow Presidium of the Soviet Composers' Union. He was a co-founder and Deputy President of the New Association for Contemporary Music (ACM).

His early works were written in a traditional academic manner until he adopted an atonal post-expressionist style. Later he turned to a kind of minimalist repetitive aesthetic already notable in his Confessiones (1979) for double bass and twelve wind instruments, and Jarilo (1981) an extensive piece for piano and tape. This line was developed in his large-scale works such as three Hymns (1987–1990), his 3rd and 4th Symphonies and an opera MR (Marina and Rainer) based on correspondence between Marina Tsvetaeva and Rainer Maria Rilke.

In 1991, Korndorf left Russia for Vancouver, Canada, where he began experimenting with electro-acoustic media. In Canada he was an Associate Composer of the Canadian Music Centre and an Associate of the Canadian League of Composers. He taught composition at the University of British Columbia towards the end of his life.

A champion of Korndorf's music, Russian conductor Alexander Lazarev, has performed and recorded most of Korndorf’s work.

"My music usually relates to serious topics: philosophical, religious, moral, the problems of a personal spiritual life, of the relationship with the surrounding world, the problem of beauty and its relationship with a reality, as well as the problem of loftiness and meaning in human beings and in art, relationship of the spiritual and the anti-spiritual. All this means that most of my works were written not for fun and in no way can be classified as entertainment. As much as possible I strive to ensure that every one of my works contains a message to each listener and that my music leaves no one indifferent, but aroused with an emotional response. I even accept that at time my music arouses negative emotions - as long as it is not indifference." (Nikolai Korndorf)

"This gleaming piece [Hymn II] is recognizably minimalist in its radically reduced material, but the composer said that he had modeled it on the solemn doxologies of the Russian Orthodox Church. And its liturgical character derives not only from actual liturgical sources but also, and at least as much, from the familiar Russian glory-music of the concert and opera stages. (Imagine Górecki arranged by Rimsky-Korsakov, or a diatonic Poem of Ecstasy.) One can believe that such a synthesis would have occurred only to a Russian composer without buying into the biology-is-destiny mystique of nationalism." (Richard Taruskin, New York Times)