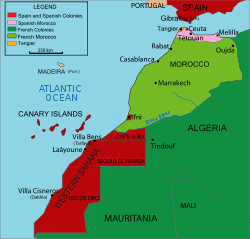 The Ifni War, sometimes called the Forgotten War in Spain (la Guerra Olvidada), was a series of armed incursions into Spanish West Africa by Moroccan insurgents and Sahrawi rebels that began in October 1957 and culminated with the abortive siege of Sidi Ifni.

The war, which may be seen as part of the general movement of decolonization that swept Africa throughout the latter half of the 20th century, was conducted primarily by elements of the Moroccan Army of Liberation which, no longer tied down in conflicts with the French, committed a significant portion of its resources and manpower to the capture of Spanish possessions.

The city of Sidi Ifni was incorporated into the Spanish colonial empire in 1860. The following decades of Franco-Spanish collaboration resulted in the establishment and extension of Spanish protectorates south of the city, and Spanish influence obtained international recognition in the Berlin Conference of 1884. In 1946, the region's various coastal and inland colonies were consolidated as Spanish West Africa.

Immediately following its independence from France in 1956, Morocco began expressing interest in the Spanish possessions, claiming it was historically and geographically part of Moroccan territory.

Violent demonstrations against foreign rule erupted in Ifni on April 10, followed by civil strife and the widespread murder of those loyal to Spain. In response, Generalissimo Franco dispatched two battalions of the Spanish Legion, Spain's elite fighting force, to El Aaiún in June.

Spanish military mobilization resulted in the Moroccan army converging near Ifni. On October 23, two villages on the outskirts of Sidi Ifni, Goulimine and Bou Izarguen, were occupied by 1,500 Moroccan soldiers (Moukhahidine).

The encirclement of Ifni had begun. Two more Legionary battalions reached Spanish Sahara before the opening of hostilities.

The storming of Ifni

On November 21, Spanish intelligence in Ifni reported that attacks were imminent by Moroccans operating out of Tafraout. Two days later, Spanish lines of communication were cut, and a force of 2,000 Moroccans stormed Spanish garrisons and armories in and around Ifni.

Although the Moroccan drive into Sidi Ifni was easily repulsed, two nearby Spanish outposts were abandoned in the face of enemy attacks and many others remained under heavy siege.

At Tiluin, 60 Tiradores de Ifni (indigenous infantry with Spanish officers and specialist personnel), struggled to stave off a force of hundreds of Moroccans. On November 25, a relief attempt was authorized. A fleet of five CASA 2.111 bombers (Spanish-built variants of the Heinkel He-111), bombed enemy positions, while an equal number of C.A.S.A. 352 transports (Spanish-built versions of the Junkers Ju-523M) dropped a force of 75 paratroopers into the outpost.

On December 3, soldiers of the Spanish Legion 6th battalion arrived, breaking the siege and retaking the airfield. All military and civilian personnel were then evacuated overland to Sidi Ifni.

The relief of Teleta was decidedly less successful. Leaving Sidi Ifni on November 24 aboard several old trucks, a platoon of the Spanish Legion paratroop battalion under Captain Ortiz de Zárate made poor ground through difficult terrain. This problem was compounded by frequent Moroccan ambushes, which by the next day had left several men wounded and forced the Spaniards off the road. On November 26, food ran out. The Spanish, low on ammunition, resumed the march, only to dig in again in the face of repeated enemy attacks.

Rations were dropped from airplane, but casualties continued to mount; among the dead was Captain Ortiz de Zárate. On December 2, a column of infantry, among them the erstwhile defenders of Telata, broke through the Moroccan lines and drove the enemy off. The survivors of the paratroop battalion set foot in Sidi Ifni once more on December 5. The company had suffered two dead and fourteen wounded.

Initial Moroccan attacks had been generally successful. In the space of two weeks, the Moroccans and their tribal allies had asserted control over most of Ifni, isolating inland Spanish units from the capital. Simultaneous attacks had been launched throughout Spanish Sahara, overrunning garrisons and ambushing convoys and patrols.

Consequently, Moroccan units, resupplied and greatly reinforced, endeavored to surround and besiege Sidi Ifni, hoping to incite popular uprising. But the Moroccans underestimated the strength of the Spanish defenses. Supplied from the sea by the Spanish Navy and invested with kilometers of trenches and forward outposts, Sidi Ifni, boasting 7,500 defenders by December 9, proved impregnable. The siege, lasting into June 1958, was uneventful and relatively bloodless, as Spain and Morocco both concentrated resources on Saharan theatres.

In January 1958, Morocco redoubled its commitment to the Spanish campaign, reorganizing all army units in Spanish territory as the "Saharan Liberation Army".

On January 12, a division of the Saharan Liberation Army attacked the Spanish garrison at El Aaiún. Beaten back and forced into retreat by the Spaniards, the army turned its efforts to the southeast. Another opportunity presented itself the next day at Edchera, where two companies of the 13th Legionary battalion were conducting a reconnaissance mission. Slipping unseen into the large dunes near the Spanish positions, the Moroccans opened fire.

Ambushed, the Legionaries fought to maintain cohesion, driving off attacks with mortar and small arms fire. Notable fighting was seen by the 1st platoon, which stubbornly denied ground to the Moroccans until heavy losses forced it to withdraw. Bloody attacks continued until nightfall, and were fiercely resisted by the Spanish, who inflicted heavy casualties. By nightfall, the Moroccans were too scattered and depleted of men to continue their assault, and fled into the darkness.

In February 1958, Franco-Spanish corps launched a major offensive that successively dismantled the Moroccan Liberation Army. For the first time, massively superior European air power was brought to bear as France and Spain deployed a joint air fleet of 150 planes. The Spanish were 9,000 strong and the French 5,000.

First to fall were the Moroccan mountain strongholds at Tan-Tan. Bombed from above and rocketed from below, the Liberation Army suffered 150 dead and abandoned its war caches.

On February 10, the 4th, 9th, and 13th Spanish Legion battalions, organized into a motorized group, drove the Moroccans from Edchera and swept through to Tafurdat and Smara.

The Spanish army at El Aaiún, in conjunction with French forces from Fort Gouraud, struck the Moroccans on February 21, destroying Saharan Liberation Army concentrations between Bir Nazaran and Ausert.

On April 2, the governments of Spain and Morocco signed the Treaty of Angra de Cintra. Morocco obtained the region of Tarfaya (the colony of Cape Juby), between the river Draa and the parallel 27º 40', excluding Sidi Ifni and the Spanish Sahara.

Spain retained possession of Ifni until 1969, when, while under some international pressure (resolution 2072 of the United Nations from 1965), it returned the territory to Morocco. Spanish kept control of Western Sahara until the 1975 Green March and the Moroccan Army invasion prompted a withdrawal. The future of the former Spanish colony remains uncertain.