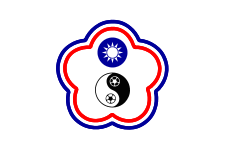 The flag used by the Chinese Taipei football team

It is a member of the Asian Football Confederation's East Asian Football Federation. Despite never qualifying for the FIFA World Cup, it reached the semi-finals of the 1960 and 1968 AFC Asian Cups, finishing third in the former. The side also won gold in the football sector at the 1954 and 1958 Asian Games.

The team's greatest success came when, playing as Taiwan, they finished third in the Asian Cup in 1960. However, the players in the team originally came from Hong Kong since the reputation of the Hong Kong national football team was not as good as the Republic of China's.[clarification needed]

Due to a political conflict with China PR, Chinese Taipei was an OFC member from 1975 to 1989.

The team's home matches are normally played in the Chungshan Soccer Stadium, located in Taipei. The stadium's capacity is slightly above 20,000 and is a football specific stadium. However, the stadium is currently being used to stage the Taipei International Flora Exposition; during this period the team will play at the World Games Stadium in Kaohsiung.

The following 23 players were called up for the 2014 FIFA World Cup qualification against Malaysia.

1 ^ China were represented by club side South China A.A.; this match is not considered an official match for China.[1]