The Children of Ares are fictional DC Comics deity characters based on Greek mythology. They are frequent opponents of Wonder Woman.

In the Golden Age adventures of Wonder Woman, when Ares was primarily known by his Roman name Mars, his chief deputies were his sons: the Duke of Deception, the Earl of Greed, and Lord Conquest who assisted the Axis powers from the planet Mars, (also Count Conquest). Deception's daughter Lya also fought Wonder Woman.

Of these, the Duke of Deception became a major recurring foe of Wonder Woman, appearing into the Silver Age as well. Wielding his own powers of illusion, Deception was also responsible for enlisting Doctor Psycho in his first engagement with Wonder Woman. He became ruler of Mars after convincing some slaves to rebel against Mars.

After the Golden and Silver Ages, the Duke of Deception made only a handful of appearances. In one adventure during the period when Wonder Woman had given up her powers, Ares used Deimos, Phobos, and Eris in a battle against the Amazons for the power to dominate every dimension of creation. 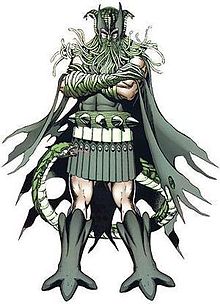 In 1985 DC Comics introduced a storyine called Crisis on Infinite Earths. This storyline erased all previous writings of their characters and re-introduced new versions of each character in their place. Charles Moulton's vision of deception, greed, and the will to power being the precursors of war was set aside in favor of versions closer to the myths of Deimos, Phobos, Eris, Harmonia and Eros. All five are parented by the Olympian war god Ares and the Olympian love goddess Aphrodite. Aside from Harmonia and Eros, the remaining children of Ares are enemies of the Amazons in the Wonder Woman comic book. They were re-created by writer George Pérez.

Phobos is the Greek god of fear and horror. His Roman counterpart is Timor. After an initial attack on Wonder Woman ending with the decapitation of his brother Deimos, Phobos later sent Ixion and Euryale to attack the Amazon out of revenge.[1] The plot failed and he was imprisoned to Tartarus by Hermes. The witch god Circe later freed Phobos and convinced him to aid her during the events of the War of the Gods. This ended in his death. He later joined his brother Deimos and sister Eris in spirit in escaping Tartarus. Together they possessed the bodies of various Batman villains, in Phobos case the villain Scarecrow. He was later returned to the Underworld by his father Ares. It was Phobos who initially created the monster Decay, mixing his power with that of Medusa's carcass. 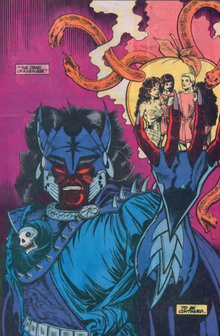 Eris is the goddess of strife and chaos, and is the creator of the Golden Apples of Discord famously written in the story of the Trojan War. Her Roman counterpart is Bellona. In ancient myth she is also identified with the Greek goddess Adrestia. When Queen Hippolyta agreed to open her country of Themyscira to the outside world, Eris used the Golden Apples of Discord to make the various United Nations dignitaries fight among one another. Wonder Woman was able to defeat Eris but the event caused a negative outlook to the Amazons by the outsiders and Eris' plans thus stayed on her side despite her defeat. Eris was later killed by the Son of Vulcan during the War of The Gods storyline. Her spirit resurfaced years later as part of a plot engineered by her also dead brothers Phobos and Deimos to merge Gotham City with the Areopagus, Ares' throne capital. Eris possessed the super villain Poison Ivy while her brothers possessed the Joker and the Scarecrow. They were later defeated by the combined efforts of Wonder Woman, Batman, Robin, Troia, Wonder Girl, Nightwing, Artemis, and the Huntress.

Harmonia is the Greek goddess of harmony and concord. Her Roman counterpart is Concordia. Due to being the daughter of Ares she was physically ugly and became a bitter goddess, constantly wailing at her father's home, the Areopagus. She longed to access the beauty that comes with being a child of Aphrodite.[2] Through the kindness of Wonder Woman she was able to bring forth her inner beauty. Because of this she became a close supporter of the Amazon and would aid her when able. It was through Harmonia's help that Wonder Woman was able to defeat Ares before he could destroy the world. Harmonia was later killed during the War of the Gods storyline by her brother Phobos.

Eros is the Greek counterpart to the Roman Cupid. He is also tied to the Greek gods Anteros and Erotes. Eros is the male equivalent to his mother, Aphrodite, but to a much lesser extent. Whereas Aphrodite has dominion over all aspects of love, Eros tends to gravitate his hold over sudden love, lust and the erotic. He is rarely shown in the Wonder Woman comic but at the urging of his father was convinced to shoot a lust arrow at Zeus, who was watching the Amazon Artemis bathing in a scrying pool. This angered Hera who toppled the floating island of Themyscira during her jealous confrontation of her husband.