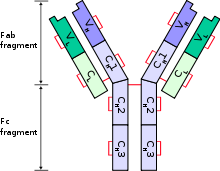 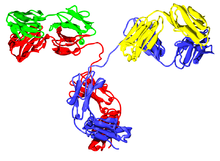 An antibody molecule. The two heavy chains are colored red and blue and the two light chains green and yellow. See also:[1]

There are two types of light chain in humans (as in other mammals),

Antibodies are produced by B lymphocytes, each expressing only one class of light chain. Once set, light chain class remains fixed for the life of the B lymphocyte. In a healthy individual, the total kappa to lambda ratio is roughly 2:1 in serum (measuring intact whole antibodies) or 1:1.5 if measuring free light chains, with a highly divergent ratio indicative of neoplasm.

The exact normal ratio of kappa to lambda ranges from 0.26 to 1.65. Both the kappa and the lambda chains can increase proportionately, maintaining a normal ratio. This is usually indicative of something other than a blood cell dyscrasia, such as kidney disease.

The immunoglobulin light chain genes in tetrapods can be classified into three distinct groups: kappa (κ), lambda (λ), and sigma (σ). The divergence of the κ, λ, and σ isotypes preceded the radiation of tetrapods. The σ isotype was lost after the evolution of the amphibian lineage and before the emergence of the reptilian lineage.[1]

Other types of light chains can be found in lower vertebrates, such as the Ig-Light-Iota chain of Chondrichthyes and Teleostei.[2][3]

Camelids are unique among mammals as they have fully functional antibodies which have two heavy chains, but lack the light chains usually paired with each heavy chain.[4] The functional role of this separate repertoire is unknown as yet.

Only one type of light chain is present in a typical antibody, thus the two light chains of an individual antibody are identical.

Each light chain is composed of two tandem immunoglobulin domains:

The approximate length of a light chain protein is from 211 to 217 amino acids.[2]