Order of Saint Basil the Great

Order of Saint Basil the Great
For other Basilian orders, see Basilian (disambiguation).

The Order of St. Basil the Great (OSBM Latin: Ordo Sancti Basilii Magni, Ukrainian: Чин Святого Василія Великого, Chyn Sviatoho Vasyliia Velykoho) also known as the Basilian Order of Saint Josaphat is an monastic religious order of the Greek Catholic Churches that is present in many countries and that has its Mother House in Rome. The order received approbation on August 20, 1631. Its monks, brothers, and priests work primarily with Ukrainian Catholics and are also present in other Greek-Catholic Churches in Central and Eastern Europe. 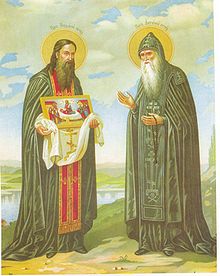 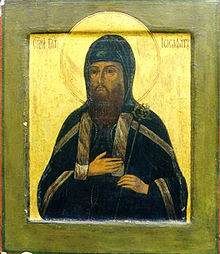 Monastic life began to develop in Ukraine in the times of Saint Vladimir the Great (980-1015), when the first monks settled in the caves near Kiev led by Sts. Anthony and Theodosius. After the Mongol invasions in the 13th century the monks fled to western lands of Halych-Volhynia and the Grand Duchy of Lithuania, spreading Eastern Monasticism there. After the Eastern Rite Ruthenian (modern day Belarus and Ukraine) Church has re-affirmed its communion with the Catholic Church in the Union of Brest in 1596. The monasteries living according to the rules of St. Basil and St. Theodore Studite, previously undergoing a period of laxity and decline, were reformed by the initiative of Saint Josaphat Kuntsevych and Joseph Benjamin Rutsky started in the monastery of the Holy Trinity in Vilnius. Following this reform in 1617 the individual monasteries united into a single congregation under a Protarchimandrite directly subject to the Metropolitan, similar to the path Western Rite monasticism took during the Middle Ages. In 1739 a second congregation was formed by monasteries in Halychyna and in 1744 both congregations were united in the Ruthenian Order of St. Basil the Great by Pope Benedict XIV.

The Order of St. Basil the Great spread and flourished across modern day Belarus and Ukraine and played a key role in the education both of laity and clergy and helped preserve the distinctiveness of the Ruthenian culture in the predominantly Polish and Roman Catholic Polish-Lithuanian Commonwealth until the partitions of Poland by the end of the 18th century. In 1772 the Order had over 200 monasteries and over 1000 monks, six seminaries, twenty schools and colleges and four printing houses.

In the last years of the 18th century most of the Ruthenian lands came under the Russian Empire, where the Order along with the whole Ruthenian Church was persecuted and eventually the monasteries were subjected under the Russian Orthodox Church. A small part of modern day Ukraine came under the Austrian rule were the fate of the Ruthenian Church was much better. However, the Order suffered under the policies of Emperor Joseph II, directed generally against all religious orders. In the second half of the 19th century efforts were undertaken to renew the Order. By 1882 it was reduced to just 60 monks in 14 monasteries. With permission from Pope Leo XII the Basilian Constitution was updated with help from the Society of Jesus starting with Dobromyl monastery, changing the character to one less sedentary and more missionary, among other things allowing the monks to work with Ukrainian diaspora overseas. The Basilians reached Brazil (1897), Canada (1902), USA (1907) and Argentina (1934). New provinces were established covering Transcarpathia, Hungary and Yugoslavia and Romania. By 1939 the number of monks rose to over 650. In 1944, the order purchased the John E. Aldred Estate at Lattingtown, New York and it is known as St. Josaphat's Monastery.[1]

Following the Second World War, the Soviets entered further into Europe and forced the Ukrainian Greek Catholic Church into the catacombs. In all of the Soviet controlled territories only a single Basilian monastery was left open, in the Polish capital of Warsaw. Nonetheless, the Order survived among the Ukrainian diaspora in the free world (and in communist Yugoslavia where the regime was relatively benign) and in Ukraine itself where the monks secretly prayed and catechesized.

After the collapse of the Soviet Union the Order was reëstablished in independent Ukraine and other Central and Eastern European countries such as Hungary, Romania and Slovakia. Some old monasteries have been restored and new ones established. In 2001 there were over 600 monks, 300 of them in Ukraine.