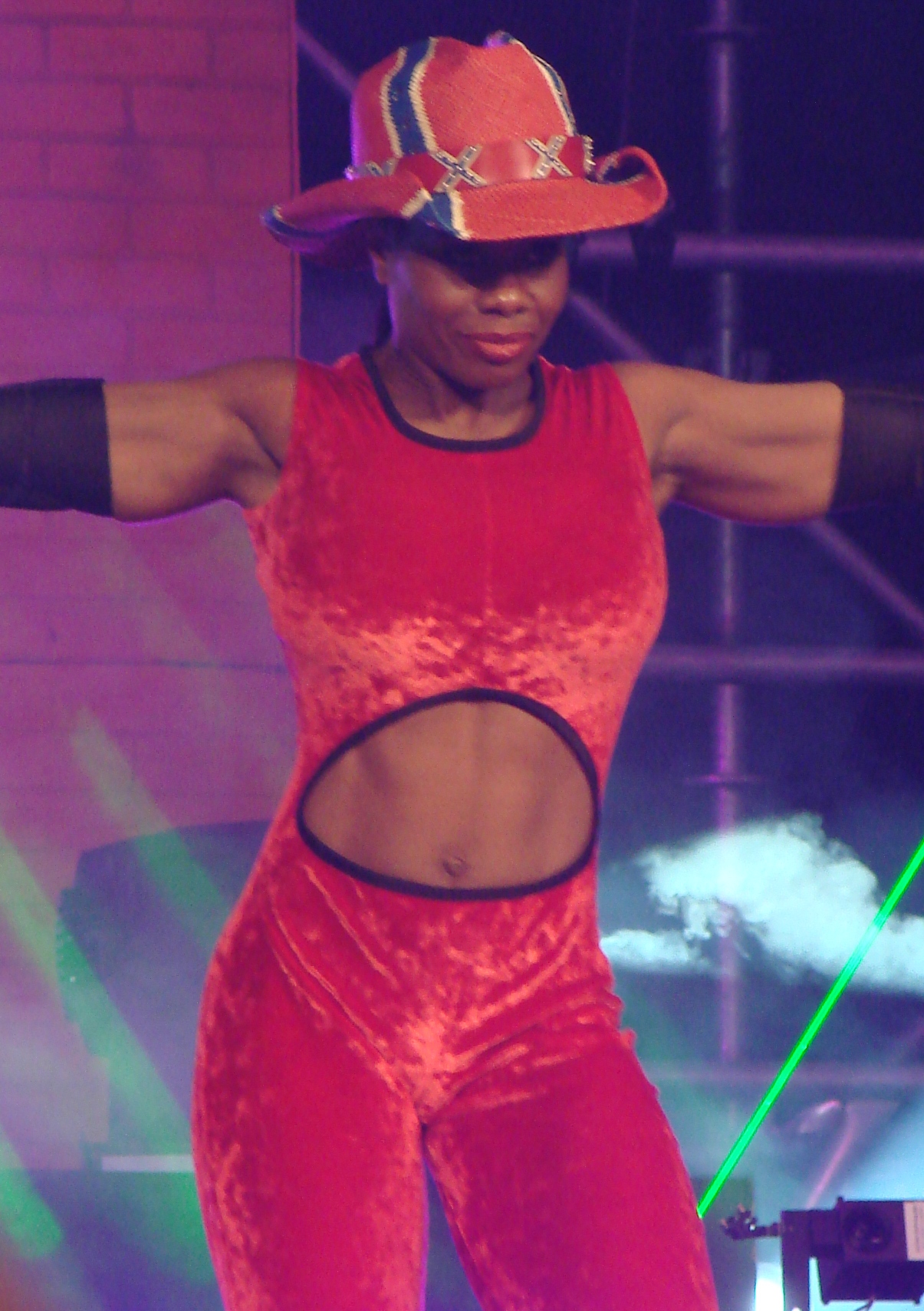 
Jacqueline Moore (born January 6, 1966), or better known as simply Jacqueline, is an American professional wrestler and actress, currently working for . She is perhaps best known for her appearances with , from the late 1990s to the mid-2000s. She is also a former two-time WWE Women's Champion, and one-time WWE Cruiserweight Champion. She was the first female to be included in the annual list of the 500 best wrestlers published by "". [cite book|title=Ladies Who Lunge|author=Brabazon, Tara|publisher=UNSW Press|date=2002|isbn=0868404217|pages=119]

Jacqueline began her wrestling training at a local .

In 1992, Jacqueline moved on to the in Memphis, where she was known as Miss Texas. She was the first ever USWA Women's Champion, winning the newly created title in a tournament on March 2, 1992. She lost the title to Lauren Davenport on April 13 and regained the title on August 24. Feuding with Davenport, Moondog Fifi, and Leslie Belanger, she held the title two more times in 1992 and three times in 1993. Throughout 1993, she wrestled Sensational Sherri Martel and Luna Vachon. She was out of the title picture for much of 1994, only winning the title once, on December 5, but enjoyed four more reigns in 1995. She held the title a thirteenth and fourteenth time in 1996 before losing her final USWA Women's Championship to Tasha Simone on November 4.

In November 1995, Jacqueline made five appearances with in and as Sgt. Rock. She defeated Ron Davis in her debut match, then feuded with The Wolfman throughout the remainder of the month.

Jacqueline began submitting pictures of herself to the -based (WCW) and was eventually contacted by WCW employee J.J. Dillon, who offered her a contract.

Jacqueline joined the World Wrestling Federation (WWF) in mid-1998, debuting on the June 1 episode of "Raw" as the on-screen girlfriend of the heel and began a feud with fan favorite, Sable, the estranged wife of Mero. After Jacqueline and Sable traded insults on several occasions, Jacqueline challenged Sable to a . The contest took place on July 26 at Fully Loaded, with Sable winning after she removed her halter top to reveal a painted on top. [cite web|url=http://slam.canoe.ca/SlamWrestlingArchive/jul27_fullyloaded.html|title=Austin and Taker win tag team gold|author=Powell, John|publisher=SLAM! Wrestling|accessdate=2008-07-31|date=July 27, 1998] The following evening on "Raw", however, WWF Chairman disqualified Sable as "body paint does not constitute a bikini", and Jacqueline was declared the winner and given the trophy.

Jacqueline and Mero separated on the November 22 episode of "Sunday Night Heat", and the jilted Jacqueline formed a new alliance of women known as the Pretty Mean Sisters with , who was separated from her husband, Goldust. Jacqueline, however, returned to the women's division in March, and on the April 12 episode of "Raw", she, Ivory, Tori, and Sable took part in a four way match for the Women's Championship. The match was declared a no-contest after Sable's stormed the ring and med the three challengers. Jacqueline officially left the stable on the August 1 episode of "Sunday Night Heat".

On the September 6 episode of "Raw", Jacqueline faced the misogynistic . Jarrett easily defeated Jacqueline, choked her with the ring ropes, forced her to submit with the figure four leglock, and broke a over her head. Jacqueline soon returned to her pursuit of the Women's Championship, which she failed to win from Ivory in a three way hardcore match which also included Luna on November 18. On November 25, Jacqueline defeated Ivory in a "gravy bowl match" to win the Golden Ladle Trophy.

Jacqueline won the WWF Women's Championship for a second time on February 1 by defeating Harvey Wippleman (who had won the belt from Miss Kitty while in drag and calling himself "Hervina") in a short match. Her reign lasted throughout February and March, with Jacqueline defeating Ivory and Lita to retain the title. In March, she lost the title to , an untrained wrestler, following extensive interference from .

The (Faarooq and Bradshaw) recruited Jacqueline on the December 18 episode of "Raw", asking her to take care of while they fought Stratus' clients, T & A. In the resulting six person tag match, Jacqueline pinned Stratus. On the December 21 episode of "SmackDown!", Jacqueline challenged member Ivory to a title match. After the other members of RTC distracted Jacqueline and enabled Ivory to pin her, the APA repaid the favor by saving Jacqueline from a group beating after the match. The feud between the APA and RTC continued throughout early-2001 and culminated in a match at on April 1, which pitted RTC (Bull Buchanan, The Goodfather, and Val Venis) against The APA and .

In 2002, Jacqueline became a referee, with her debut match being a Women's Championship bout between Jazz and Trish Stratus at the Royal Rumble. [cite news|author=Michael McAvennie|title=WWE The Yearbook: 2003 Edition|publisher=Pocket Books|date=2003|pages=28] At , she refereed a match pitting Mr. Perfect, , and Test against Scotty 2 Hotty, Albert, and Rikishi on the "Sunday Night Heat" pre-show. Jacqueline wrestled infrequently throughout 2002, receiving several title shots, none of which were successful. In late 2002, she and Trish Stratus began a feud with Victoria and Jazz, which culminated in a four-way match for the title at Judgment Day on May 18, 2003, which Jazz won. [cite web|url=http://slam.canoe.ca/Slam/Wrestling/2003/05/19/90523.html|title=J-Day just pure vomit|author=Powell, John|publisher=SLAM! Wrestling|accessdate=2008-07-31|date=May 19, 2003] She took part in a battle royal for the title on June 30, which was won by the debuting .

Jacqueline seldom appeared throughout late 2003 and early 2004, instead spending some of her time working as a trainer in ; her last match on the "Raw" brand was a losing effort against Gail Kim in a November 2003 "Heat" match. On the May 6, 2004 episode of "SmackDown!", WWE Cruiserweight Champion Chavo Guerrero issued an open challenge for anyone to face him for his title, and Jacqueline answered. Jacqueline defeated Chavo, but lost the Cruiserweight Championship back to Guerrero in a match where Chavo's arm was tied behind his back. The company released Moore in June 2004 when the creative team could not come up with any storylines for her character.

Jacqueline debuted in on the November 7, 2004 Victory Road , losing to Trinity. [cite web|url=http://slam.canoe.ca/Slam/Wrestling/PPVReports/2004/11/08/723409.html|title=Victory Road bombs|author=Clevett, Jason|publisher=SLAM! Wrestling|accessdate=2008-07-31|date=November 8, 2004] She made a second appearance with TNA on December 5 at Turning Point, where she refereed a tag team match between and Johnny B. Badd against and . [cite web|url=http://slam.canoe.ca/Slam/Wrestling/PPVReports/2004/12/06/768519.html|title=TNA Turning Point a success|author=Kapur, Bob|publisher=SLAM! Wrestling|accessdate=2008-07-31|date=December 6, 2004]

She returned to TNA at Final Resolution on January 14, 2007, joining forces with by attacking his erstwhile manager, . [cite web|url=http://slam.canoe.ca/Slam/Wrestling/PPVReports/2007/01/15/3383190.html|title=Cage, Angle on top after Final Resolution|author=Sokol, Chris|publisher=SLAM! Wrestling|accessdate=2008-07-31|date=January 15, 2007] Storm and Moore teamed up to defeat Kim and at both Against All Odds and Destination X. [cite web|url=http://slam.canoe.ca/Slam/Wrestling/PPVReports/2007/02/11/3595707.html|title=Christian retains belt Against All Odds|author=Sokol, Chris|publisher=SLAM! Wrestling|accessdate=2008-07-31|date=February 12, 2007] [cite web|url=http://slam.canoe.ca/Slam/Wrestling/PPVReports/2007/03/12/3736821.html|title=Samoa Joe denied at Destination X|author=Sokol, Chris|publisher=SLAM! Wrestling|accessdate=2008-07-31|date=March 12, 2007] Moore, however, was defeated by Kim at Lockdown in TNA's first women's steel cage match. [cite web|url=http://slam.canoe.ca/Slam/Wrestling/PPVReports/2007/04/16/4034252.html|title=Lockdown pulled down by gimmick matches|author=Sokol, Chris|publisher=SLAM! Wrestling|accessdate=2008-07-31|date=April 16, 2007] Later, during a Street Fight with Kim on "Impact!", Moore had her two front teeth knocked out of her mouth. [cite web|url=http://www.wrestlingobserver.com/wo/news/interviews/default.asp?aID=19507|title=Jacqueline interview|quote=I was having a match against Gail Kim and one spot was putting a trash can over my head and body and picking up a broomstick and starting to bang it. One of the shots hit me right in the mouth and knocked both my teeth out.] Throughout early and mid-2008, she continued to participate in women's matches, but failed to obtain the TNA Women's Championship.

Jacqueline Moore grew up in .

She has a third degree black belt in .

In mid-2001, Jacqueline, along with Tazz, , and Tori, became a trainer on the reality TV series "Tough Enough".

After leaving WWE, Moore began taking acting classes and was cast in the film "Knight Fever", an action movie set in in the 1970s.

*Nicknames
**"The Pride of Tennessee"